Mrs Starmer steps into the spotlight: Keir’s publicity-shy NHS worker wife Victoria – who asked ‘who the bleep does he think he is?’ the first time they spoke – makes rare outing to support him at Labour conference

Keir Starmer’s publicity-shy wife Victoria made a rare foray into the spotlight today as her husband delivered his first in-person conference speech following the pandemic.

The Labour leader first met Victoria, an NHS occupational health worker, when he was working as a solicitor, and previously revealed how she hung up on him during their first conversation, uttering: ‘Who the bleep does he think he is?’

Despite their unusual start, they married in 2007, and she has been by his side ever since as he rose through the ranks of the Labour party, although, unlike Boris Johnson’s wife Carrie, she prefers to stay behind-the-scenes.

Today, she watched on during his 88 minute speech in Brighton as he spoke movingly about his mother, an NHS nurse who suffered from a crippling rare form of arthritis, and her death.

After the speech concluded Victoria, who shares two children with Keir, joined her husband on-stage for a passionate embrace. 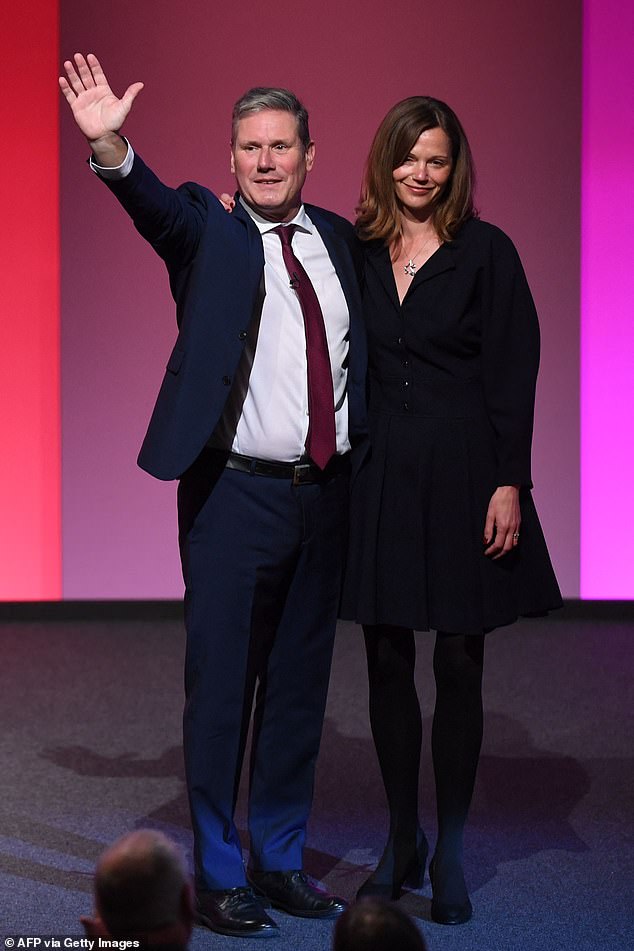 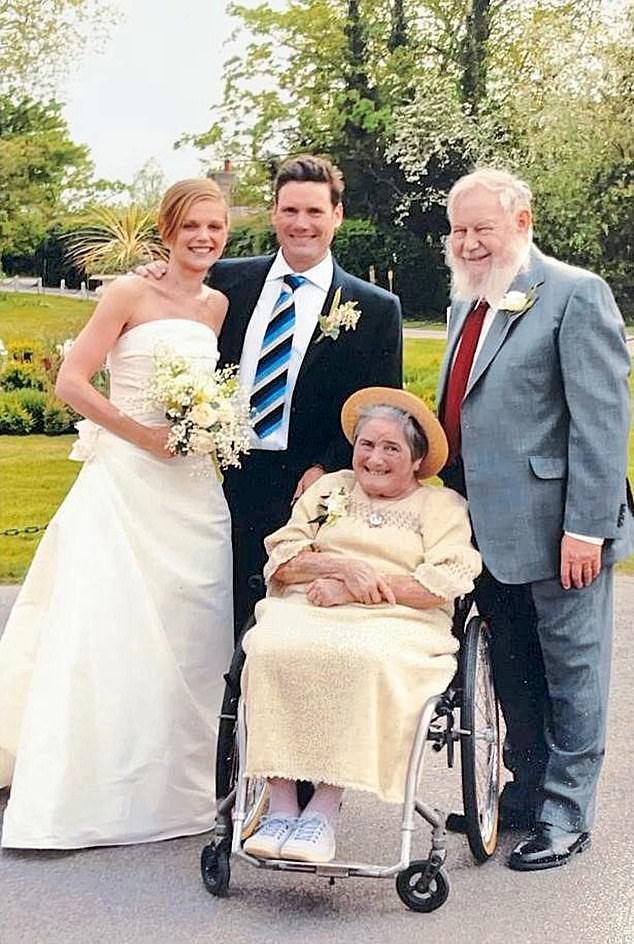 The politician married the solicitor in 2007, and she has been by his side ever since as he rose through the ranks of the Labour party

Speaking on Piers Morgan’s Life Stories last year, Keir revealed how he met Victoria, explaining: ‘I was doing a case in court and it all depended on whether the documents were accurate.

‘I [asked the team] who actually drew up these documents, they said a woman called Victoria, so I said let’s get her on the line.’

When he spoke to Victoria, who was then working as a ward sister in the NHS, he grilled her on the documents.

Shortly before hanging up, he said he heard just one comment from her. 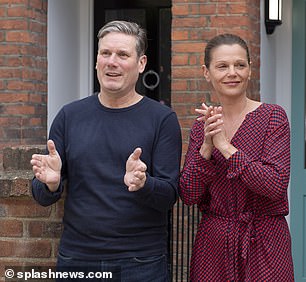 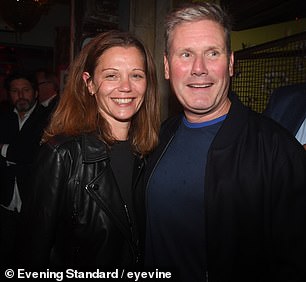 Publicity shy Victoria, who shares two children with Keir, has been spotted with the Labour leader taking part in Clap for Carers movement (left) and earlier this week in Brighton (right)

He explained: ‘She said, ‘Who the bleep does he think he is?’, then put the phone down on me. And quite right too.’

A 2008 profile mentioned that Victoria worked as a mentor to deprived children, before moving on to work in the NHS.

The couple now live together in their £1.75 million house in Camden, North London with their two children, who have never publicly been named.

Victoria is understood to now work in occupational health, and is a follower of the Jewish faith. 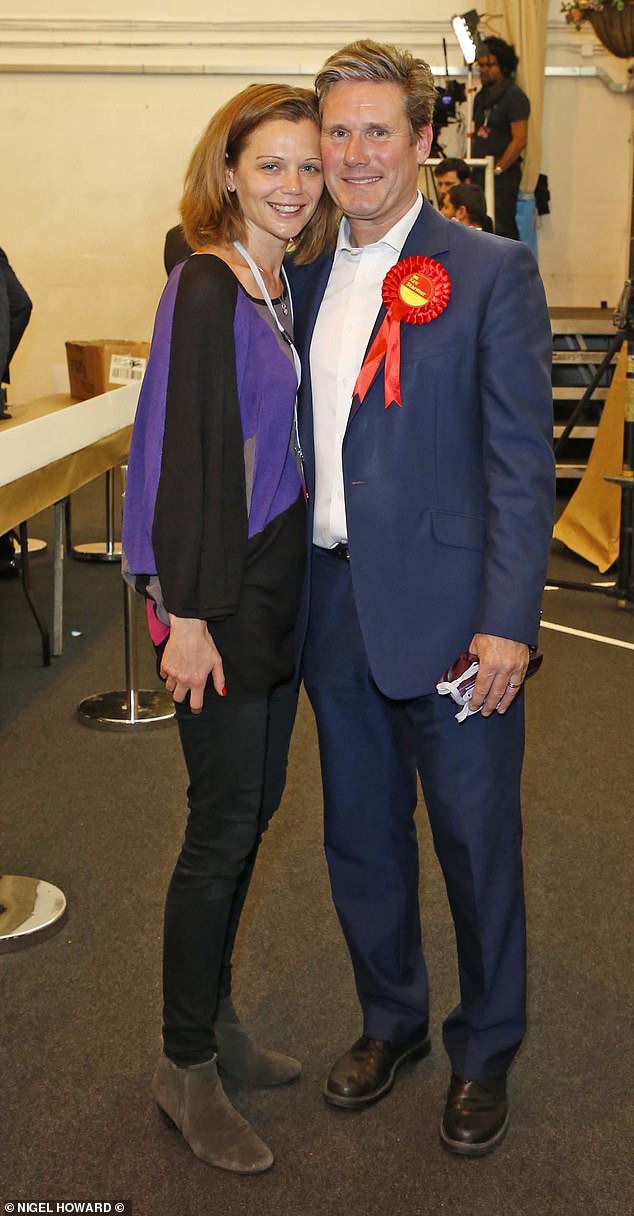 A 2008 profile mentioned that Victoria worked as a mentor to deprived children, before moving on to work in the NHS

He said: ‘It is perfectly true that my wife’s father is Jewish – they came from Poland – and my wife’s mother converted when they got married.

‘There is a long tradition of family and faith there.

‘We observe some of the practices, for example Friday night prayers, occasionally with my wife’s father – her mum sadly passed away earlier this year.’ 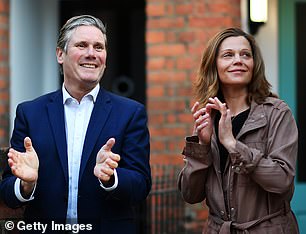 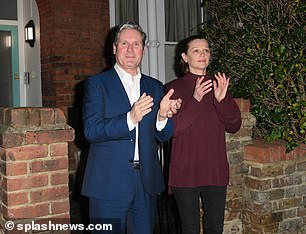 The couple now live together in their £1.75 million house in Camden, North London with their two children, who have never publicly been named 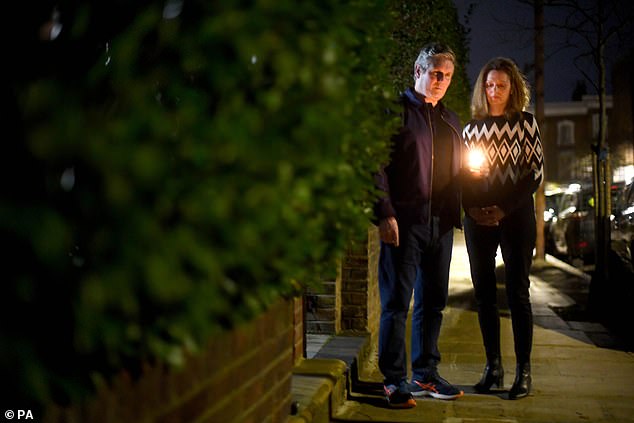 He then added: ‘My wife in particular wants our children to know the faith of her family.’

Meanwhile speaking at Limmud Jewish learning festival, he said the family spent time together every Friday, saying: ‘Just carving out that tradition, that bit of faith on Friday is incredibly important, because we get together, and we do Zoom prayers now.’

The family belong to London’s Liberal Jewish Synagogue, which is situated in the St. John’s Wood neighborhood.

Victoria’s mother Barbara, who converted to Judaism, died two weeks after suffering an accident in February 2020. 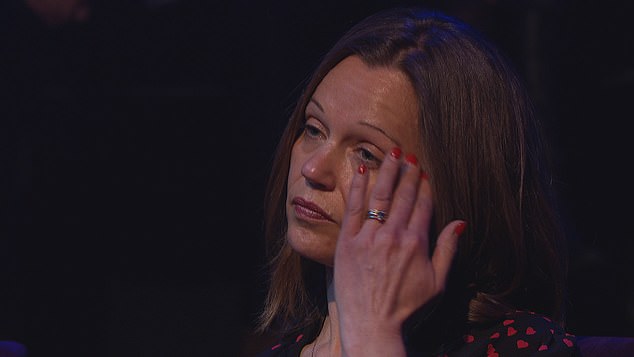 When Keir gave an interview on Piers Morgan’s Life Stories, the camera panned to an emotional Victoria in the audience

The mother of the Labour leadership hopeful’s wife had been in critical condition following the incident. It came as Keir was campaigning to lead the Labour Party.

He cancelled his appearance at a hustings in Nottingham to be with his family, later saying: ‘It’s been a terrible year for my wife and her family.’

And when Keir later spoke about the accident on Piers Morgan’s series, the camera panned to an emotional Victoria in the audience.

Keir said: ‘The accident came out of the blue.’I’ve seen intensive care many times but I’d never seen anything as awful as this. 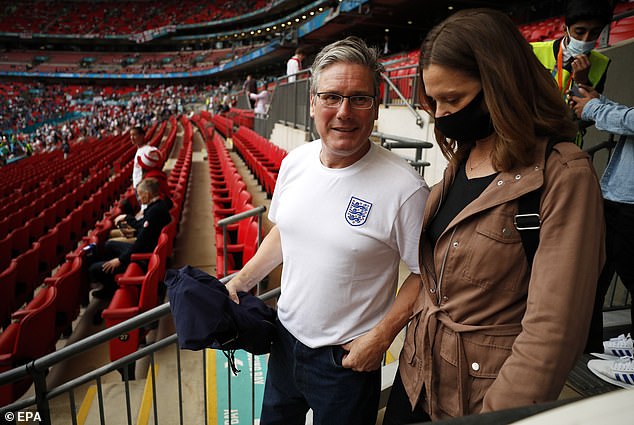 ‘Vic [his wife Victoria] obviously got a message through to me, I was in the Chambers of Parliament and I went straight to the hospital.

‘We were in the leadership election. It was very difficult for Vic and I took the decision to cancel the leadership campaigning and withdrew completely to be with her.

‘That was the right thing to do, it didn’t take me any time to make up my mind that was what I was going to do. Every day we went to the hospital. Tragically, Vic’s mum didn’t make it.

‘I had to do something I’d never done before which was to comfort someone who was going through grief. 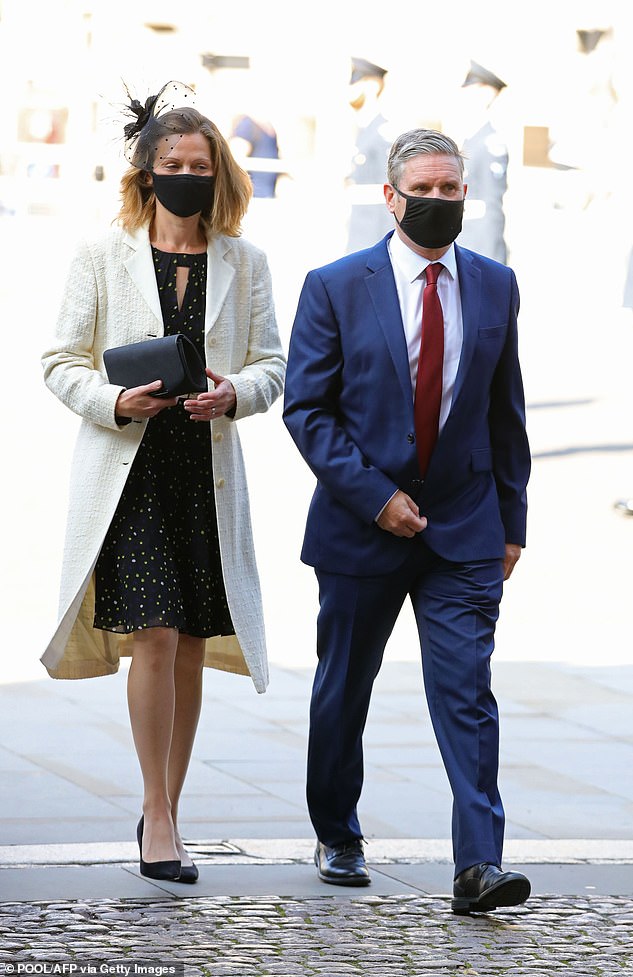 The former solicitor has made few public appearances since Keir came to be Labour party leader, joining him at the service for the 80th anniversary of the Battle of Britain in September

‘My dad had died, my mum had died. I’d been through my version of that grief. But to see your wife go through it… it’s deep.’

Meanwhile Victoria’s father, who was born Jewish and has roots in Poland, lives on the same street as Starmer and his family.

Throughout lockdown, Victoria was spotted joining Keir on the doorstep of their North London home to Clap for Carers.

Meanwhile she also stood alongside her husband as they took part in a candlelit vigil for Reclaim These Streets after Sarah Everard’s death in March.

The former solicitor has made few public appearances since Keir came to be Labour party leader, joining him at the service for the 80th anniversary of the Battle of Britain in September. 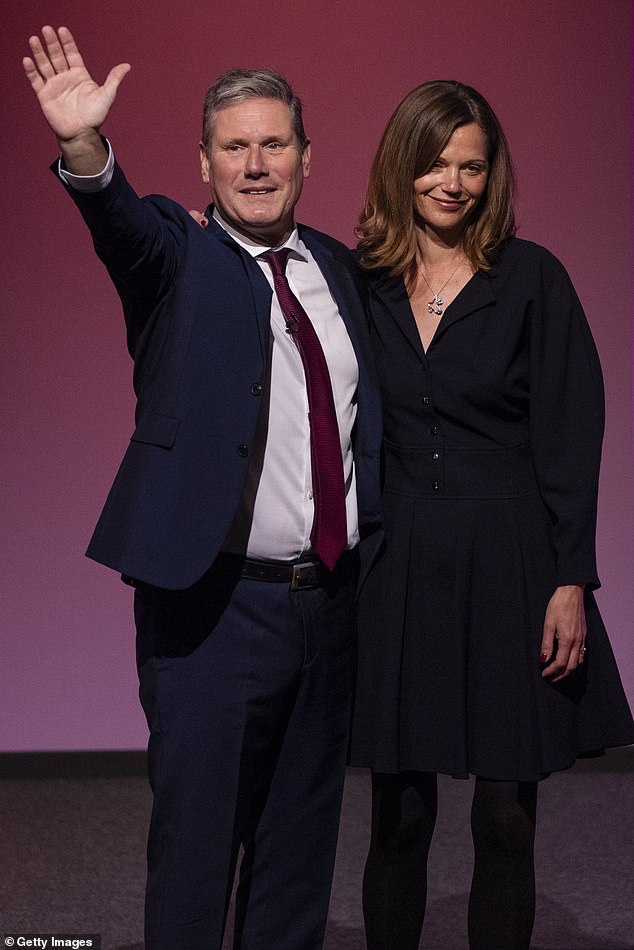 Today, Victoria embraced Sir Keir after his eventful speech to Labour activists in Brighton this afternoon 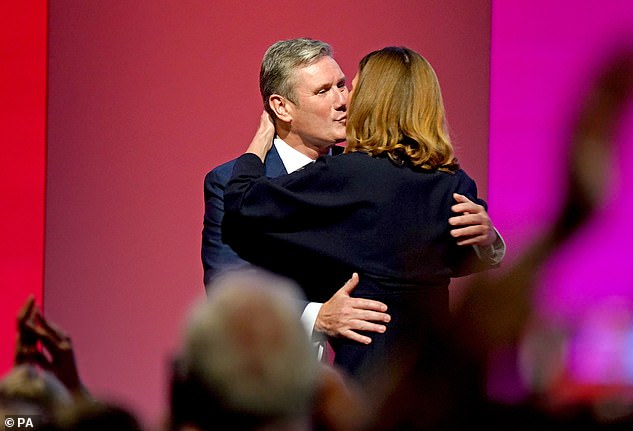 She was also snapped alongside the Arsenal supporter at the Euro 2020 final in Wembley earlier this summer.

Today, she embraced Sir Keir after his eventful speech to Labour activists in Brighton this afternoon.

Keir was repeatedly heckled by ‘petulant, small and awful’ Corbynites today as he warned Labour they must ‘get serious’ by ditching hard-Left policies to win power – and spoke movingly about the experience of caring for his late mother.

In his first in-person conference speech following the pandemic, Sir Keir faced chants of ‘Oh, Jeremy Corbyn’ and shouts about his Brexit policy being to blame for the crushing election defeat in 2019.

In one grim piece of trolling, there were jibes screamed out as Sir Keir was talking about his late mother, an NHS nurse who suffered from a crippling rare form of arthritis.

Sir Keir merely shook his head and carried on as he told how the Covid crisis had brought back memories of her illness.

He shrugged off other brickbats, saying he got the same treatment from Tories at PMQs every week. ‘It doesn’t bother me then, it won’t bother me now.’

As he was hit with more catcalls of ‘shame’, he shot back: ‘Chanting slogans or changing lives!’

The speech lasted a marathon 88 minutes as Sir Keir battled to make progress through the interruptions.