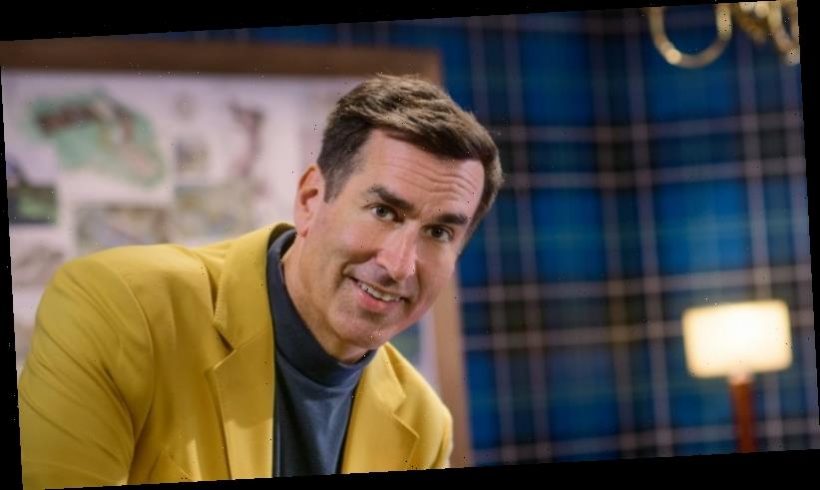 For true connoisseurs of early 21st century American film comedy, Rob Riggle is an icon. The hyper-aggressive sidekick bro in Step Brothers. The gleefully sadistic Vegas cop in The Hangover. The scene-stealing, drug-dealing gym teacher in 21 Jump Street. And, of course, the bad guy in The Lorax. Yet he has rarely been given the chance to dominate the grand stage, to be the main event. Perhaps that will change with Holey Moley, Channel Seven’s new attempt to fuse the Australian public’s two greatest passions: sport and watching people get hurt. 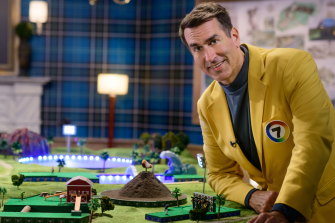 Some might say the stars of the show are the contestants: skilled athletes whose mini-golf chops are tested at the same time as their ability to endure a battering at the hands of the Holey Moley course’s various, entertainingly violent obstacles. But the wacky travails of the bruised putt-putters would seem hollow and tragic without the hyperactive bellowing of Riggle, in partnership with former Australian sprint champion Matt Shirvington – a commentary coupling roughly equivalent to letting Lleyton Hewitt and Will Ferrell spearhead the summer of cricket. Which might not be a bad idea, judging by the colour – and volume – that the Riggle-Shirvo team brings to proceedings.

It was not exactly the expected career trajectory of the Saturday Night Live alumnus. “I didn’t,” Riggle says when asked whether he saw himself becoming a golf commentator at this stage in life (he professes to enjoy the game while not being an expert). “These opportunities just come along, and I couldn’t pass it up – I knew this would be a show like nothing anyone had ever seen before.”

There’s something in this. Although those old enough to recall the glory days of It’s a Knockout might find it vaguely familiar, others will get a sense of the Holey Moley vibe if they imagine Australian Ninja Warrior just ate a bag of dodgy mushrooms. Riggle believes the skill of the competitors – who range from professional golfers to enthusiastic and flamboyant amateurs – is as crucial an element to the mix as the spectacular tumbles they take while trying to negotiate the course.

“I think people enjoy seeing the skills of the contestants and the real sporting side of it,” he says, “but of course a big part of the fun is seeing them try to dodge those obstacles – and failing. Everyone loves seeing someone else take a fall. Slapstick – it’s the oldest and most reliable form of comedy there is, and that’s what we deliver in spades.”

“There’s sport, there’s comedy, there’s people falling into water – it’s got something for everyone.”

Riggle speaks from experience, as his stint hosting the Australian edition of Holey Moley comes after starring in the same role on the US original. That show has already racked up two seasons of putting mayhem, so slipping into the yellow jacket Down Under came as naturally to him as tasering Ed Helms.

One trump card the Aussie version has that its American progenitor lacks is the presence of golfing legend Greg Norman as the “resident golf pro” (in America, the pro is – intriguingly and confusingly – NBA superstar Steph Curry). Sadly, Riggle is unable to provide any insight into the Great White Shark. “We didn’t actually get to meet,” he says, with just a tinge of regret in that sonorously familiar growl. “Greg did his thing separately from the rest of us.”

Riggle is far better equipped to wax lyrical on the virtues of the man sitting beside him in the commentary booth – former Fastest White Man on Earth Shirvington. “Shirvo is fantastic,” he says. “So nice, so easy to work with, and a really funny guy too.”

Indeed, on the show, Riggle and Shirvo – or “Shiggle” as the ex-sprinter has dubbed them – bounce off each other like a seasoned comedy double act, whether crying out in tandem horror at the catastrophic fates of the golfers, sharing a few quiet asides on the peculiarities of Australian culture, or jamming as many mentions of the word “Uranus” into a five-minute interval as is humanly possible. 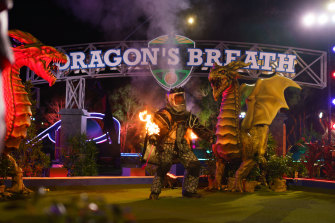 Technically, Shirvington assumes the role of “play-by-play” caller while Riggle is the “colour commentator”, but the roles are far more loosely defined in practice, with the Australian keeping up the thinnest veneer of professionalism while his bombastic American partner careens off on whatever tangents he likes and occasionally becomes vaguely baffled by what’s unfolding in front of him.

In this, Riggle might be said to be assuming the role of audience proxy, as bafflement is sure to be a large part of the viewer experience, at least at first. Just why we are watching these intrepid golfing adventurers tumble off spinning logs, or be knocked into water hazards by aggressive toilet doors, or get sent flying as they try to dodge whirling windmill blades, is not immediately apparent.

Riggle has his own answer. “It’s just good old-fashioned family entertainment. Everyone can sit down and enjoy this. There’s sport, there’s comedy, there’s people falling into water – it’s got something for everyone. And it doesn’t take itself seriously at all.“

That might be the key to it all, and why putting Riggle on the front line is such a masterstroke. With such a man, whose career has been built on some of the most splendid silliness Hollywood has had to offer, calling the action, there’s no way to mistake Holey Moley for anything other than what it is: a colossal, over-the-top, technicolour celebration of sheer absurdity. And Riggle is the rudder that keeps it from ever straying from its ridiculous course.

The man himself would shy away from any such grandiloquent assessments. “I’m just always grateful to be working in this business. It’s a privilege.”

WHAT Holey Moley
WHEN 7.30pm Monday on Seven