Mariska Hargitay weighed in about whether or not Olivia and Elliot will get together on ‘SVU’/’Organized Crime’ and admitted things are ‘percolating’ between them.

It’s the ultimate will-they-or-won’t-they. For years, fans have been wondering about a possible Olivia Benson and Elliot Stabler romance. There’s clearly chemistry between them, and after that “I love you” confession during Organized Crime’s first season, nothing seems off the table. Mariska Hargitay and Christopher Meloni opened up about the relationship on the September 23 edition of TODAY and revealed if they know about a romance in the future.

“It’s all underneath percolating,” Mariska said on TODAY when asked if Stabler and Benson will get together. “We’re trying to, right now, after Stabler being gone for 10 years and the way that he left and the complexity of what’s happened and how he came back surprising me, we’re still finding our way. But it’s complex and real and I think what I love about it most is that it’s earned. This relationship is truly earned. Not a lot of people have a 23-year relationship on film.”

Mariska and Christopher are best friends in real life and have been since Law & Order: SVU premiered in 1999. Mariska gushed that she and Chris had “an instant, instantaneous connection that is inexplicable, that has only grown, and I look at it as a gift.” When asked if they ever dated, Mariska joked that they dated for 4 years and “just broke up.” Chris quipped, “Don’t tell our spouses.”

TODAY co-host Craig Melvin pressed Christopher about Elliot’s “I love you” to Olivia on Organized Crime. Mariska and Christopher said Elliot was under “emotional duress” at that moment. The actor continued, “I was saying it because it was in the midst of an intervention. My family was coming together with the help of Olivia Benson for an intervention. One of my daughters said ‘I love you,’ but I was looking at Mariska.” 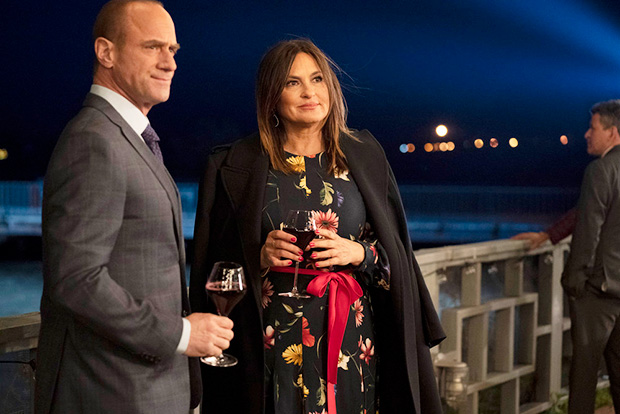 Christopher looked over at Mariska and said, “How could you not?” They both said “I love you” right then and there on the show. Their friendship is so wholesome!

Law & Order: SVU returns for season 23 on September 23 with a two-hour premiere on NBC. The premiere will be followed by the season 2 premiere of Law & Order: Organized Crime at 10 p.m.