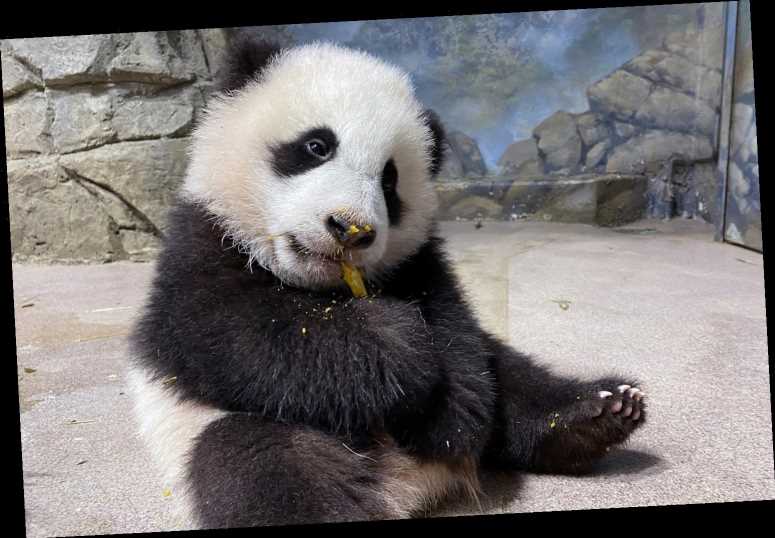 Xiao Qi Ji had a big day on Wednesday!

He started off the day clinging onto a keeper's broom as they swept his enclosure because it looked like fun, and then followed up these chores with his livestream debut at Smithsonian's National Zoo & Conservation Biology Institute. During the stream, which was open to all animal lovers, the National Zoo's newest panda cub licked up a cooked sweet potato in front of his legions of online fans.

Xiao Qi Ji spent the rest of the livestream getting food all over himself, attempting adorable handstands, and showing off his strength by playing tug-of-war with his keeper. All in all, it was a brilliant show.

The zoo is temporarily closed to the public due to the ongoing coronavirus pandemic, but the baby giant panda is blossoming behind the gates. Now 5 months old, the cub was recently plunked into a tub for weigh-in and he's right on schedule, gaining around a pound a week. Currently 22 pounds, he has about 230 to go. Xiao Qi Ji is still nursing for most of his nutritional needs but is exploring new foods. He's also less dependent on mom Mei Xiang in other ways.

"He can get himself places," says giant panda curator Michael Brown-Palsgrove. "He knows where she's at. He doesn't need to call her."

While he's exploring his indoor enclosure more and copying mom's climb up and down the rocks — which will be useful when he ventures outside to climb trees – Xiao Qi Ji is a cautious fellow. "Some cubs move around with a little bit more abandon and less self-regard, but he is very careful when he's moving around and makes sure that he has a safe out," Brown-Palsgrove tells PEOPLE.

But falling doesn't hurt because he has so much padding, and it's an important part of learning. The little cub has to face his fears. "We're starting to see him climb higher and higher all the time," Brown-Palsgrove adds. Along with rock climbing, wrestling with Mom and playing with toys are some of the cub's newest hobbies. He also plays with the keepers he seems to know and trust. Soon he'll be able to answer to his name and come when he's called, just as the other adult giant pandas have been trained to do. It's an important skill because keepers can't go into enclosures with adult panda, even ones they cared for as cubs. In a few months, keepers will have to interact with Xiao Qi Ji through a protective barrier. If he's outside with his mom and they want him to come in, they can't go into the outside enclosure to get him. This is a precaution put in place for the safety of the keepers and the animals. Giant pandas have strong jaws, Brown-Palsgrove says. It's unclear if a zoo panda would ever get aggressive with a keeper or hurt someone by not knowing their strength, but the National Zoo isn't taking any risks.

"They're a bear. I don't know what their motivation would be, but I'd rather not test that," he adds.