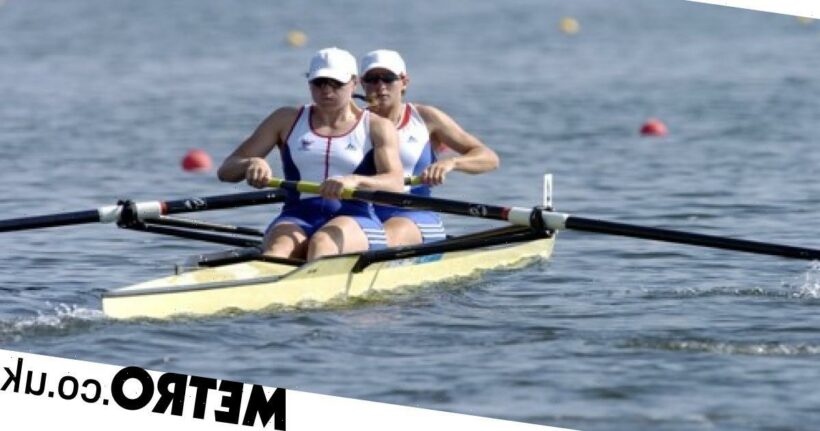 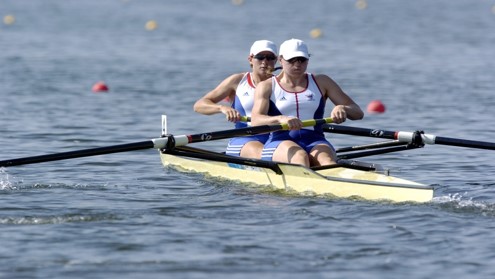 I never dreamt of being an Olympian.

My school reports labelled me ‘unsporty’ and even mentioned a ‘poor attitude’ towards PE lessons. I was tall and uncoordinated as a teenager, while the ‘sporty types’ were short and nippy, excelling at all activities.

At university, I wanted to try something new; I toyed with the idea of drama or political debating.

I certainly didn’t intend to take up rowing, and when first suggested at the freshers clubs fair, I laughed.

But by a twist of fate, I found myself in a boat weeks later when new friends begged me to ‘make up numbers’. Although I protested at first, I was quietly curious about the camaraderie I’d noticed.

I was far from instantly brilliant – who is on their first effort? – but I fell in love with it: the feel of being in a boat, on the river, learning to drive your oar in time with your crewmates.

Unlike on the school hockey pitch, once in a rowing boat, there’s no option to opt out. I felt instantly addicted.

There were still no Olympic aspirations. I’m grateful I fell in love with the sport itself first, not the idea of winning medals – it made the gruelling training and brutal culture later bearable.

When my coaches suggested I trial for the Olympic team after university, everything changed. I couldn’t believe it but felt compelled to explore the possibility.

National coaches told me to ‘get serious’, asserted that I shouldn’t expect to have fun and questioned if I had the requisite ‘will to win.’

I figured I had to learn to think differently, to focus on being tough and show how committed I was.

We trained three times a day, usually about two hours each session, seven days a week, most weeks of the year. It was all-consuming. Everything else came second: family, friends, relationships.

I gave my all in first in a crew of eight rowers plus a cox (a team member who does not row but steers the boat and sits facing forward), and then in a coxless pair (two rowers with no cox) but at my first two Olympics we fell well short of the podium. It was devastating.

In this winning-obsessed culture, such results left you feeling at rock bottom off the water – inferior and inadequate.

Some rowers and coaches didn’t want to talk to you if you lost. It left me feeling worthless.

We now better understand the mental health costs if athletes feel that they have to win in order to justify their human value – it’s madness to think your life’s worth is justified by an activity that lasts a few minutes. Especially when there are so many factors out of your control that affect the results, from the weather to referees to injuries.

After those two ‘failed’ Olympics, I retired. I had lost so much self-belief.

My crewmates were shocked but could see I was a shadow of myself and that I wasn’t thriving.

It instantly gave me a broader perspective on life beyond a boat. But within a few months, the benefits of stepping back compelled me to return for one more go at the Olympics.

Then 30, I realised that I had been a good rower, despite poor Olympic results, and believed that I still had the potential to win a medal.

Most of my friends thought I was mad; the coaches weren’t keen either looking at my past record.

This time, I wanted to create a different experience and see if I could find an alternative way to succeed, by ensuring that I learnt and took positives from each day.

When I returned, our psychologist asked, ‘what will you gain if you don’t win a medal in Athens?’

At first I thought this was heresy to even contemplate, but it forced me to readjust my mindset.

It was the beginning of what I now coin ‘the long win’ approach. It involved appreciating the gains made each day that I could take into life after sport: working in a team, developing resilience, constantly learning.

These had lasting value that would survive beyond moments stood on a podium.

It was still unbelievably tough, and the sporting world still has a way to go to develop high performance environments where athletes can thrive rather than be punished, but a different mental attitude after a year outside sport helped me perform to a higher level.

As I crossed the finish line at my third Olympics in Athens 2004, I felt a complete mix of emotions – first, utter exhaustion.

By the end of a 2000m rowing race, you are incapacitated from burning muscles; your lungs on fire fighting for oxygen.

Next, I felt a crushing disappointment when I realised that we hadn’t won. Everything is geared around what’s required to come first. Nobody plans to come second.

But moments later, I felt a flood of pride and relief. We’d given everything we had.

I was torn between learned behaviour that I should be unhappy with anything less than winning and the uplifting sight of Union Jacks waving joyfully in the grandstands that made me smile as we headed towards the medal ceremony pontoon.

I walked away from my Olympic career wondering how to make sense of that silver medal. In traditional sporting talk, if you finish second, you are the first loser.

A phrase I first heard in the playground. It’s a dangerous perspective on performance – there can only be one winner, and if we devalue everything and everyone else, then we are excluding and undermining the majority.

Sports psychology now teaches athletes to focus on delivering their personal best, not targeting a particular result, and then accepting how that plays out, learning from it and improving next time.

I spent some time thinking about how it feels to come second compared with first, and surprisingly kept finding unhappy winners. Sporting champions who felt empty, flat, even depressed. How could this be?

‘Team GB silver medallist Ben Whittaker has been criticised for his reaction to missing out on gold at the Tokyo Olympics, pocketing his medal and not congratulating his rivals.

‘Asked about his emotional reaction to only winning silver, Whittaker told the BBC: ‘You don’t win silver, you lose gold. I’m very disappointed with myself.’

Jonny Wilkinson has talked a lot about his poor mental health as he obsessively chased the next cap, medal, trophy, expecting joy to come when he won – except it never did. Michael Phelps has talked powerfully about his mental health struggles and ‘the weight of gold’ and Simone Biles has put the topic of mental health firmly at the top of the agenda in Tokyo 2020.

When I discovered that gold-medal winners weren’t always joyful either, I realised that we needed a better way to define and pursue winning.

Success isn’t just about standing on the podium, it is the experiences that you treasure and make use of long after the medals have been tucked away in a drawer.

When I get together with my old crewmates, we don’t bring shiny trophies or remember race results. We talk about joyful times we had on training camps, such as jumping on beds to our favourite music after a hard day or secret trips for delicious ice creams between sessions!

It has taken me years to make sense of that intense decade training as an Olympic rower, to challenge some of the ‘winning is everything’ orthodoxy that held me and others back.

I wrote a book about the concept of ‘The Long Win’ because I kept seeing a damaging obsession with winning in other parts of my life too – working as a business coach, as a parent of two children navigating schooling that is obsessed with grades and league tables; and all around us in the media.

I must stress that I am not saying ‘it’s only taking part that counts’ – it’s about pursuing excellence in a way that has integrity and a framework of values and purpose. And seeing success as more than a short-lived, short-term moment in time.

When watching the Tokyo Olympics, it’s important to see beyond the medals. There are brilliant stories everywhere – in near-misses, personal bests and daring risks as well as those precious moments on the podium.

The true value of triumphs (or failures) will be found in what lasts when the cameras stop rolling.

Dr Cath Bishop’s first book ‘The Long Win: the search for a better way to succeed’ is out now.