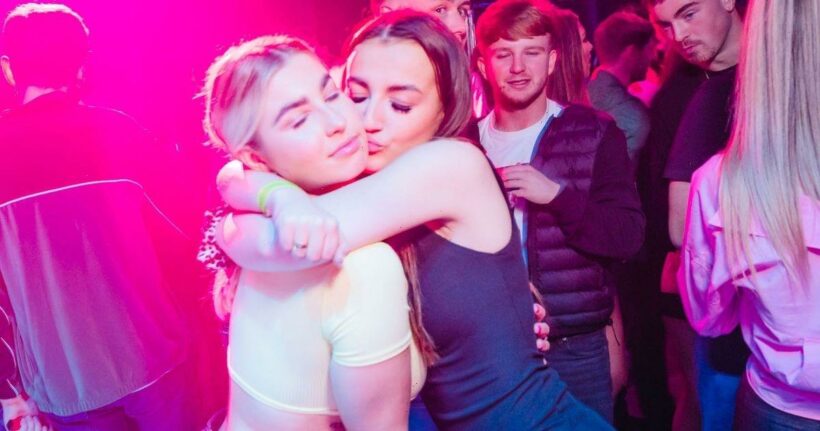 A lot of young people often eye-up potential matches on the dance floor when they head to a nightclub.

And unfortunately for two lads, they appear to have been awkwardly caught in the act.

Photographer Alex Brown snapped a pair of partying girls at Liquid and Envy in Oldham, Greater Manchester, earlier this month.

However, as well as the ladies, he also captured two lads checking them out too.

People were quick to notice when the club posted the image to Facebook.

Alex, 27, says he was only told of his photo's popularity by the nightclub’s DJ last weekend, and joked he 'feels sorry for maybe catching them out'.

However he admitted they could simply have been trying to get past him taking a photo.

The lad wearing a puffer jacket, Ethan Taylor, was tagged in the photo by a teasing pal, which left him jokingly commenting: 'F**k sake', before brushing off jokes he'd been 'caught in 4K'.

Alex says that the photo, which was taken between 12am and 2am, has now racked up more than 162 interactions online.

And many have been left giggling over the cheeky snap.

One person exclaimed: "Hahaha caught in the act."

While another added: "I know where them lads are looking. Baited."

Photographer Alex, from Royton, Oldham, said: "It could be one of those things where they weren't actually looking and they were trying to get past, but it does look like they were looking at them. It looks pretty funny.

"I feel sorry for the lads because I might have caught them out there a bit, but it happens.

“I didn't mean to catch anything like that. It was a complete coincidence.

"I remember taking the photo but I didn't notice anything.

“The girls were enjoying the chance to get a photo and I was just focusing on them.

"I'm always keeping an eye out for anything that looks inappropriate but nothing like that stood out to me with this one.

"I wasn't even aware of the photo going viral, but the DJ told me about it when I went into work.

"I'm editing these at the end of my shift at about 5am, so admittedly every now and again I do miss something. I sort through ones that are definitely not suitable to go on.

"Normally I'll get a message from someone telling me to take it down, but nobody's been in touch about this one anyway."

The photo comes after some other nightclub pictures when viral back in September as people were left giggling over the boozy antics.