Carrie Bradshaw eat your heart out! Self-confessed shoe addict has spent $60,000 on her collection of 110 pairs of designer heels – including 40 pairs of Louboutins

A self-confessed shoe addict has collated an impressive 110 pairs of designer shoes worth $60,000.

Tara, from New York, has dedicated a room in her house to showcase her lavish collection.

She said that she has been obsessed with shoes since she was a little girl and has added big designer brands Christian Louboutin, Manolo Blahnik, Gucci and Prada to her collection. 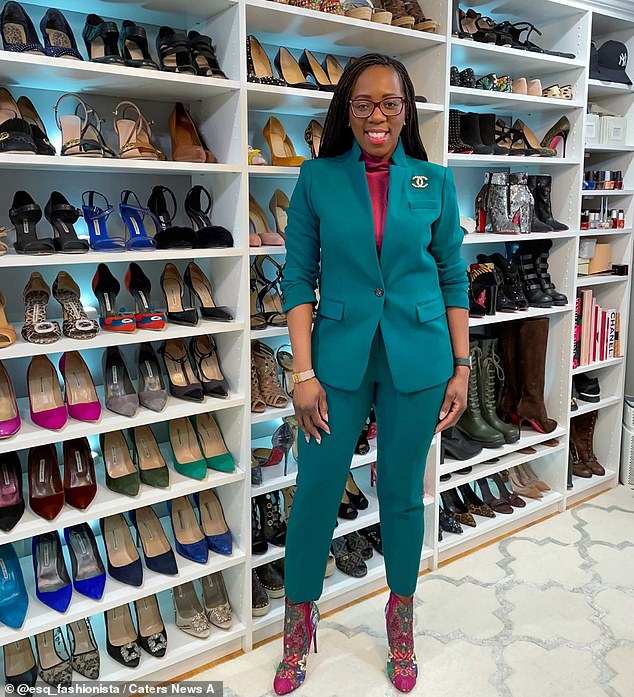 Tara, from New York, has collated an impressive 110 pairs of designer shoes worth $60,000 and has dedicated a room in her house to showcase her lavish collection

The attorney used to dress up in her mother’s heels which made her feel amazing, but her obsession became more serious after she became a corporate attorney because of more freedom with ‘how she could dress’.

Tara said: ‘I have always loved fashion and shoes, I remember the moment I got my very first pair of heels when I was in high school, it was so special.

‘Shoes are my one true love because they are forever, whereas with clothes your weight can go up and down and affect what clothes you can wear.

‘But once you reach a certain age, your shoe size doesn’t change and you can keep shoes forever because you know you aren’t ever going to outgrow them.’ 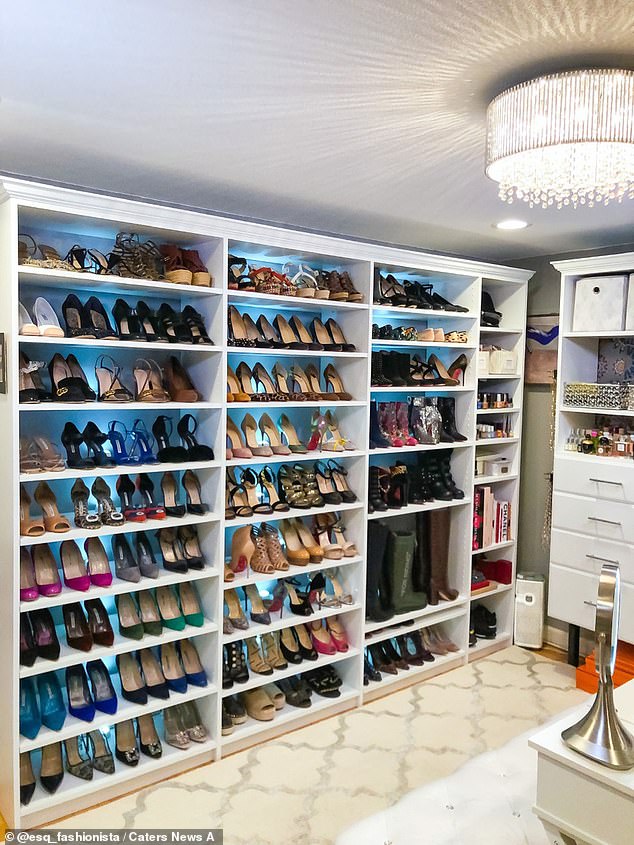 The attorney has been obsessed with shoes since she was a little girl and has added big designer brands Christian Louboutin, Manolo Blahnik, Gucci and Prada to her collection

In her previous job, Tara had to go to court daily, meaning she was more restricted in her footwear and fashion choices.

However, since changing jobs and no longer having to attend court every day, Tara said her shoe obsession increased.

Tara said: ‘I would say my shoe obsession became more serious after I became a corporate attorney because I had more freedom with how I could dress.

‘I also started loving the Sex and The City series, which heightened my love for shoes even more as it was full of beautiful shoes. 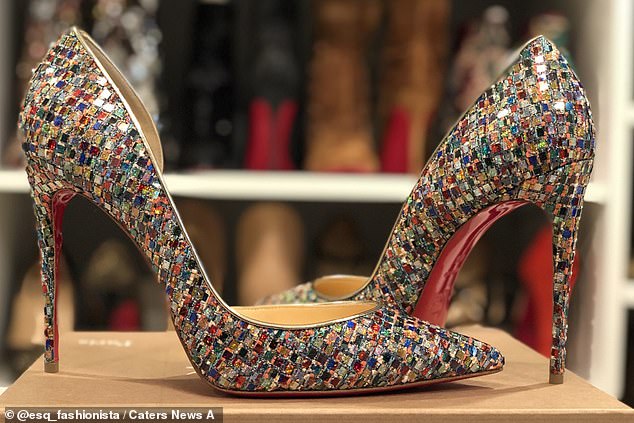 ‘I just completely fell even more in love than I already was.

‘So, in 2008 during a work trip to Chicago, I went shopping in Barney’s – a luxury department store – while I had some downtime and I bought myself my first ever pair of Manolo Blahnik heels.

‘It was so exciting, I couldn’t believe I had my very own pair.

‘I would say this is when my obsession was really kickstarted. I absolutely adore them and I still have them now.

‘I have been working on my collection and adding to it ever since.’

Since her shoe obsession accelerated, Tara has discovered a community of fellow shoe addicts on online forums focused on specific shoe designers. 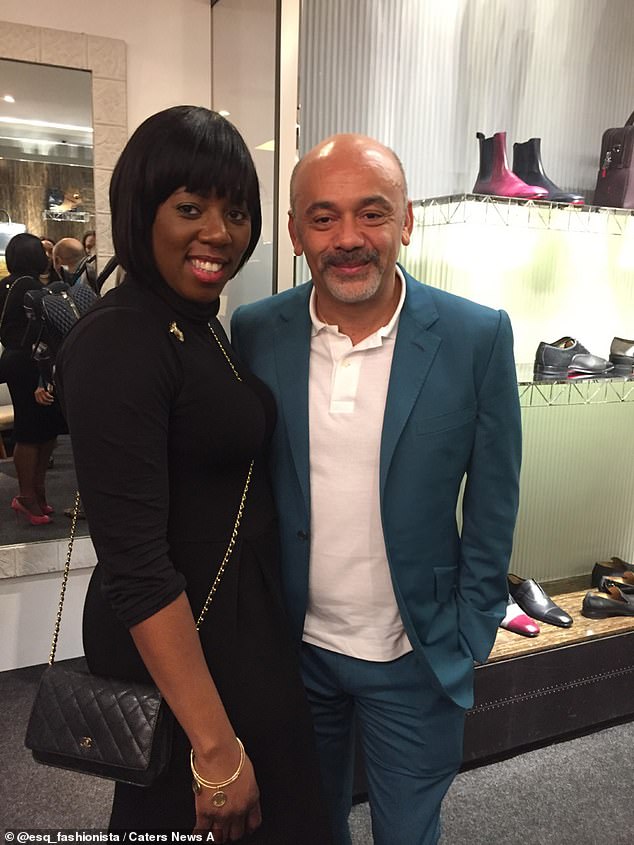 Tara’s most expensive pair of shoes are a military-style pair of boots with a thick heel and fur lining from Christian Louboutin (pictured), who she has met a few times at special events

She said: ‘I found lots of people who all love shoes as much as I do, we all shared our collections and news pairs of shoes when we purchased them.

‘This also got me really interested. We have met up for shopping events at shops such as Barney’s and I have even hosted a few, it is really fun.’

With Christian Louboutin being Tara’s favourite shoe designer, she currently has around 40 pairs of the famous red soles.

The shoe fanatic said: ‘The whole experience of shopping at the Louboutin boutiques makes is amazing.

‘The atmosphere, the service, the way the shoes are beautifully displayed and the amazing red carpets. It makes you feel great when you’re shopping there.

‘Louboutin’s are my favourite, I have the most pairs of them. I even met Christian Louboutin a few times at special events.

‘The red sole is so sexy, there is nothing like it. They make an outfit and add another dimension to whatever you’re wearing, that is just the effect the shoes have.

‘They are also made incredibly well and I love their unique designs and colours.

‘The most expensive pair of shoes that I have bought is a pair of Louboutin boots. They cost around $1,600.

‘They are a military-style with a thick heel and fur on the inside. As saw as I saw them I knew I needed them. 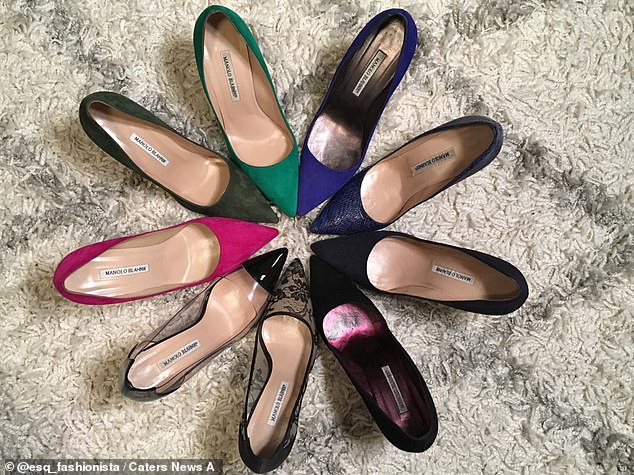 ‘I would say my second favourite designer is Manolo Blahnik. I have about 20 pairs of those, they’re amazing and such classics.

‘My other favourites in my collection are Gucci, Prada and Miu Miu. They’re all so well made and stand the test of time, which is very important to me.

‘My collection is based on timelessness, so I can get a lot of wear out of them and they will never become outdated.

‘I have a few fun and special pairs, but a majority of my collection are timeless pairs that will never go out of fashion.

‘I would say that 95 per cent of my collection are heels because I rarely wear flats. Heels make your legs look awesome and give a more sophisticated and polished look.

‘To me, they are the most important part of any outfit and are the best accessory. I usually pick my shoes first and then build my outfit around them.’ 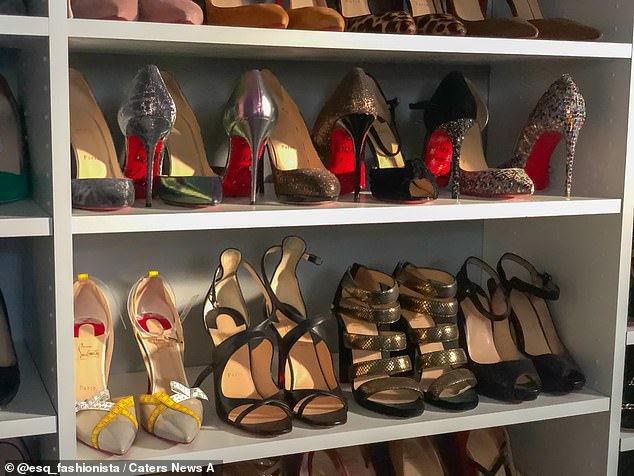 Tara compared picking a favourite pair of shoes to a parent picking their favourite child, however, she has a couple of pairs of signed Louboutin’s which is very special to her.

She is always on the lookout for a new pair of shoes and keeping up to date with when new collections and seasons are being released.

Tara said: ‘To help me stay on top of what is being released I have built amazing relationships with sales associates. They send me pictures and let me know what is coming out so that I don’t miss out.

‘I have been working with some of them for around 15 years, so they have really gotten to know my style. So they send them over to me and ask if I want them to hold my size so that I can secure the pairs that I really want. 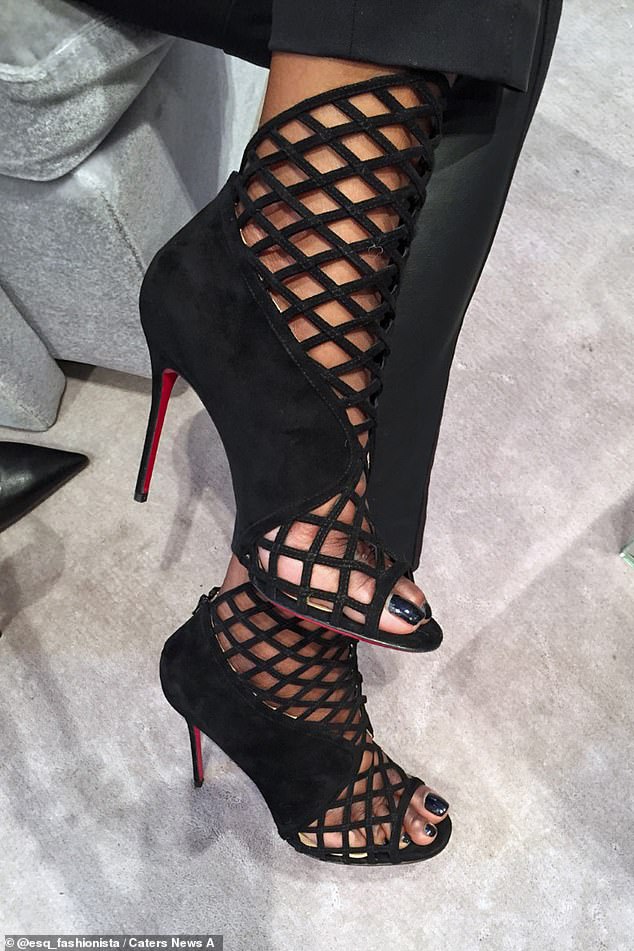 She said she has worn almost all of the pairs of shoes she owns, with only a couple yet to be worn (pictured modelling a pair of Louboutins)

‘I have sales associates all over the world, in England, Ireland, across Europe and in various places around the US too.

‘I usually purchase a new pair every month.

‘When I was living in my old house, storage became a real issue as my collection continued to grow. So when I was searching for a new home, having space for all of my shoes was a priority.

‘I needed an extra bedroom from my shoes. When I moved into the new house, I designed my closet around my shoe collection.

‘However, I am starting to run out of room again for my ever-growing collection. I am going to redesign the closet so that it is bigger.

‘Shoes are a fun escape for me, it is one of the ways I can express myself every day.

‘I am very fortunate I can buy all of these shoes and I am really proud of my collection which I have been working on for around 15 years.

‘My collection is an investment, and I have worn almost all of the pairs of shoes that I own. There are only a couple of pairs that I haven’t worn yet.’

Tara shares her shoe collection with her Instagram followers on @esq-fashionista. 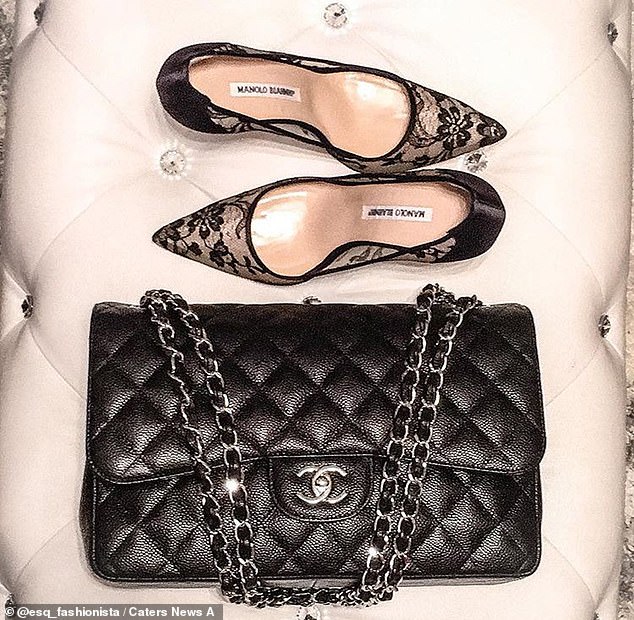 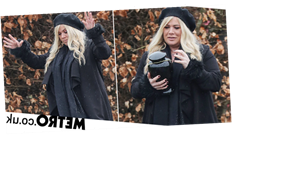 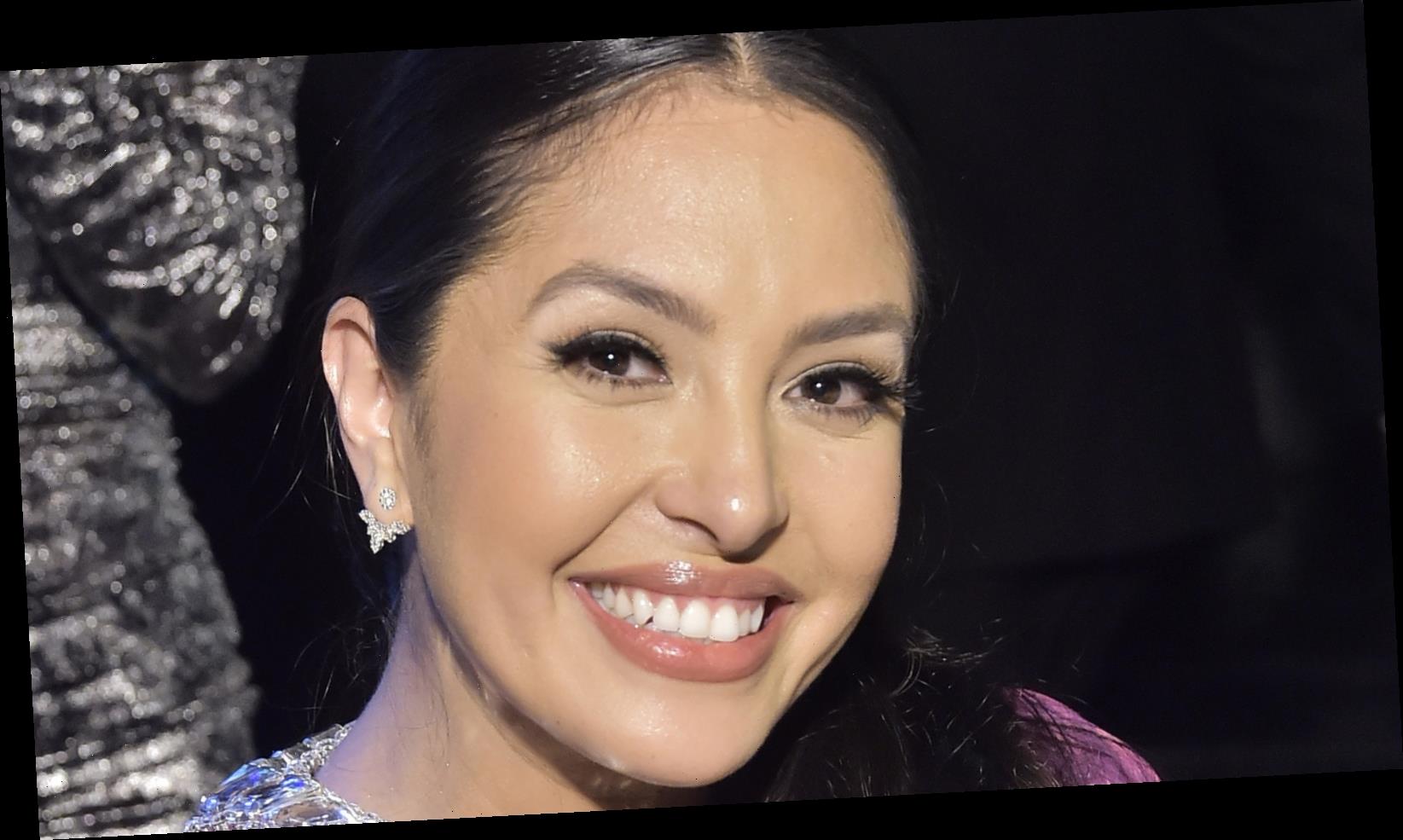