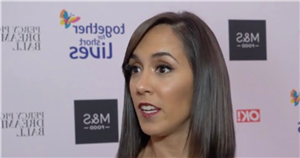 Strictly Come Dancing's It Takes Two host Janette Manrara has revealed a secret from the show that fans would never guess.

The 37 year old professional dancer, who recently revealed that the popular BBC programme helped to strengthen her relationship with Aljaž Škorjanec, 31, gave an insight into the costume department during an exclusive interview with OK! at The Together For Short Lives' Ball.

The Together For Short Lives' Ball aims to raise £300,000 to allow families caring for children with life limiting conditions to make the most of the time they have together.

Speaking on the red carpet at the ball, which was sponsored by M&S Food and held in partnership with OK! magazine, Janette said: "Sometimes the costumes that we use in the dress run can be completely changed for the live show!"

"It is very last minute for wardrobe sometimes – bless them! They are just so good at their jobs!"

Meanwhile Janette, whose husband Aljaž is partnered with Dragons' Den star Sara Davies, revealed how she is 'massively' close to the businesswoman outside of the show.

Janette added: "We go for like girl dinners together. I think [Aljaž] feels a little bit left out! She [Sara] is like: 'What are you [Aljaž] doing tonight? Well great because I am going to go for dinner with Janette so you do that!'"

It comes after the Strictly It Takes Two host and Aljaž began dating back in 2009 after meeting while in the Broadway show Burn The Floor.

The couple toured the world together but were quickly faced with being plunged into a long-distance relationship once the show was over.

However, just as Aljaž was getting ready to return to Slovenia and Janette was preparing to go back to Los Angeles, the pair were asked to audition for the BBC show.

Speaking on the Sliding Doors podcast, Janette explained: "The thought of doing the whole long-distance thing made it hard for us.

"We were very scared about what was going to happen to our relationship."

She went on to speak about how she and Aljaž were invited to be on Strictly as she said: "They called me first and asked me to join the show, I didn’t scream but my face said it all. Within five minutes they called him straight after."

Describing it as a "dream come true", she continued: "Getting Strictly Come Dancing was the most incredible thing, not just for my career but for my personal life and marriage with Aljaz because if it wasn’t for Strictly, I don’t know if we could have worked through the long-distance thing."

Janette and Aljaž joined the programme in 2013 for its 11th series and just four years later the pair tied the knot, solidifying their relationship.

It comes after the star recently told OK! that Aljaž cried when she was first given her new role as It Takes Two presenter.