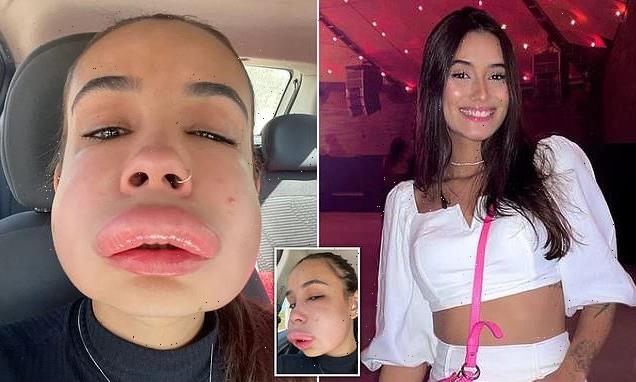 Student, 20, reveals how her face swelled dramatically after an allergic reaction to a product designed to dissolve lip filler

A 20-year-old student was left with a massively swollen face after a severe allergic reaction to a product designed to dissolve lip filler.

Isis de Oliveira Almeida Pinheiro, from Palmas, northern Brazil, was left with the terrifying reaction after having hyaluronidase injected into her lip earlier this month.

The psychology student posted footage of the horrifying mishap to her TikTok in a clip that has racked up 1.5million views. 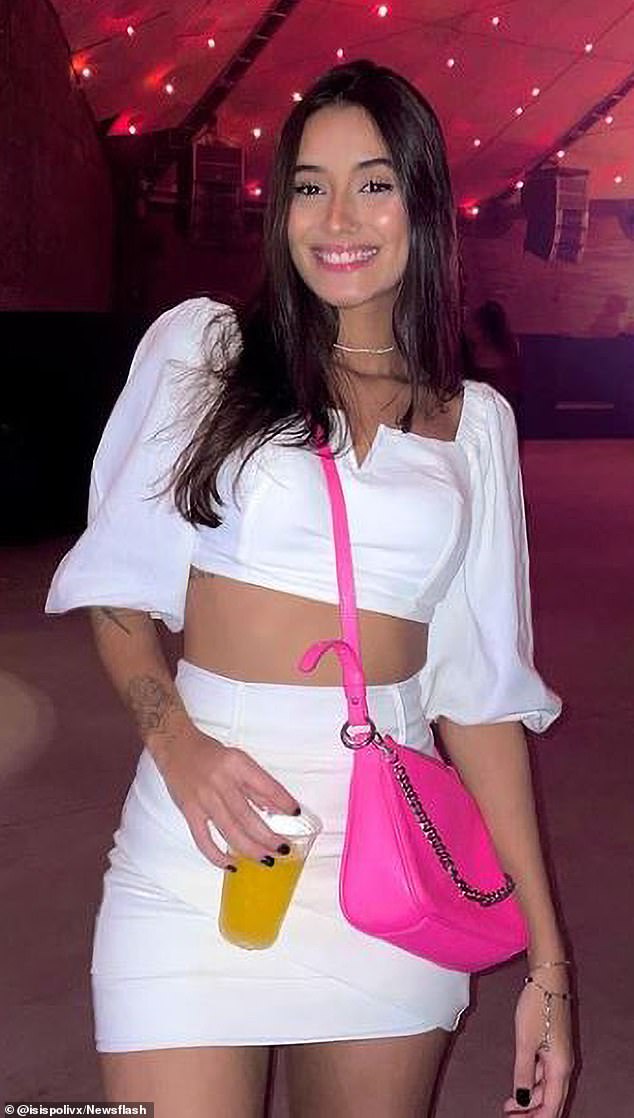 Isis de Oliveira Almeida Pinheiro, from Palmas, northern Brazil, was left with a massively distorted face after an allergic reaction caused her cheeks and jaw to swell up. Pictured, before the reaction 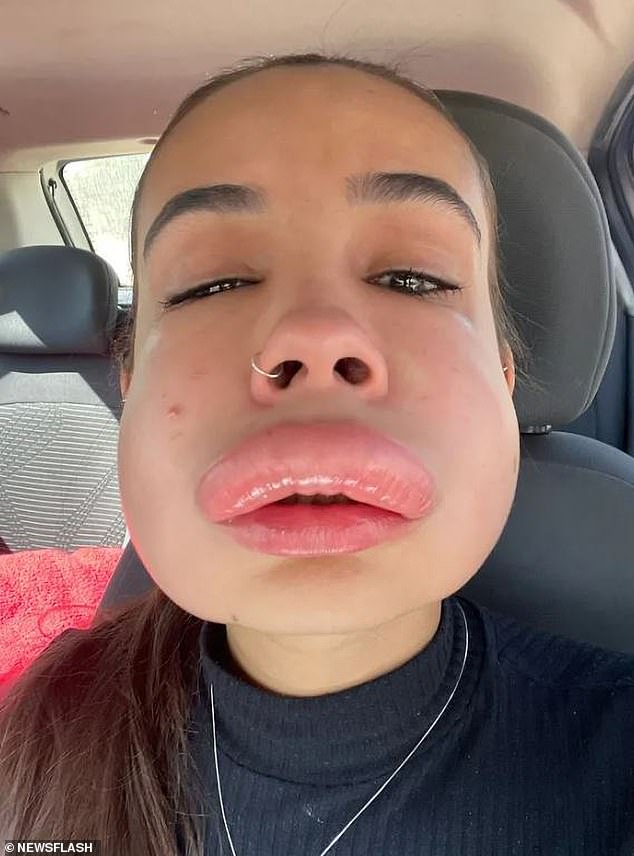 Isis needed to have her filler dissolved after being left with one side of her lip fuller than the other following a recent plumping appointment.

She told local media: ‘First we tried to shape it, because hyaluronic acid in the first days can be shaped, but there was an excessive accumulation of the product and it didn’t work.

‘We also tried perforating to squeeze it out but it didn’t work out. Then the last time I went, we applied hyaluronidase, which I later learnt has a very strong allergic potential.’ 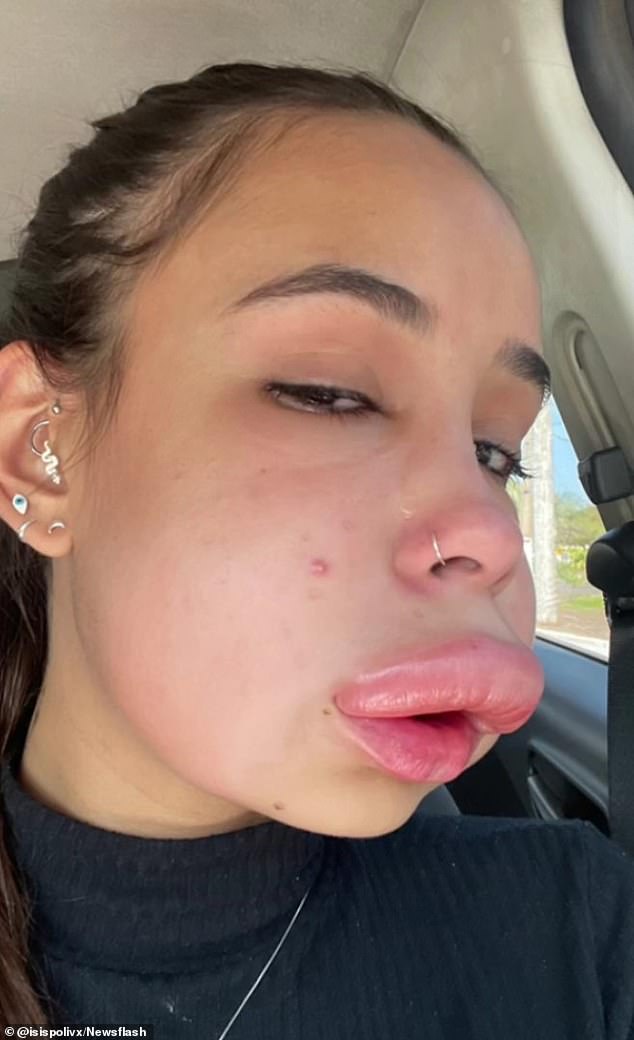 The psychology student posted footage of the horrifying mishap to her TikTok which racked up an astonishing 1.5 million views 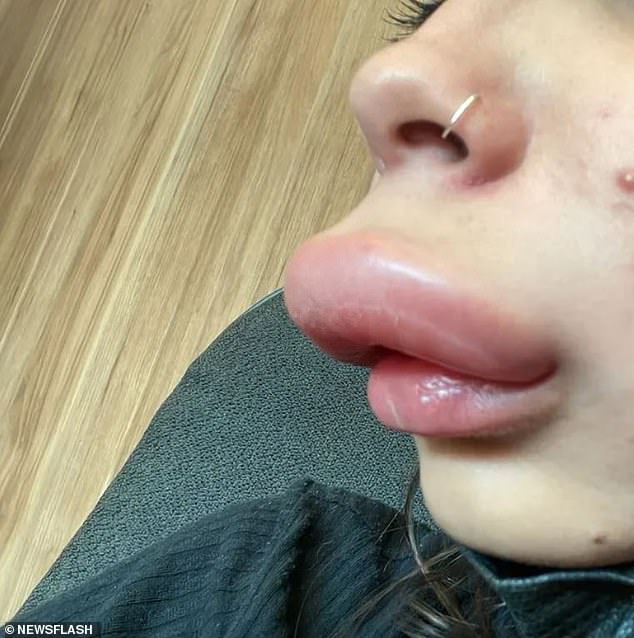 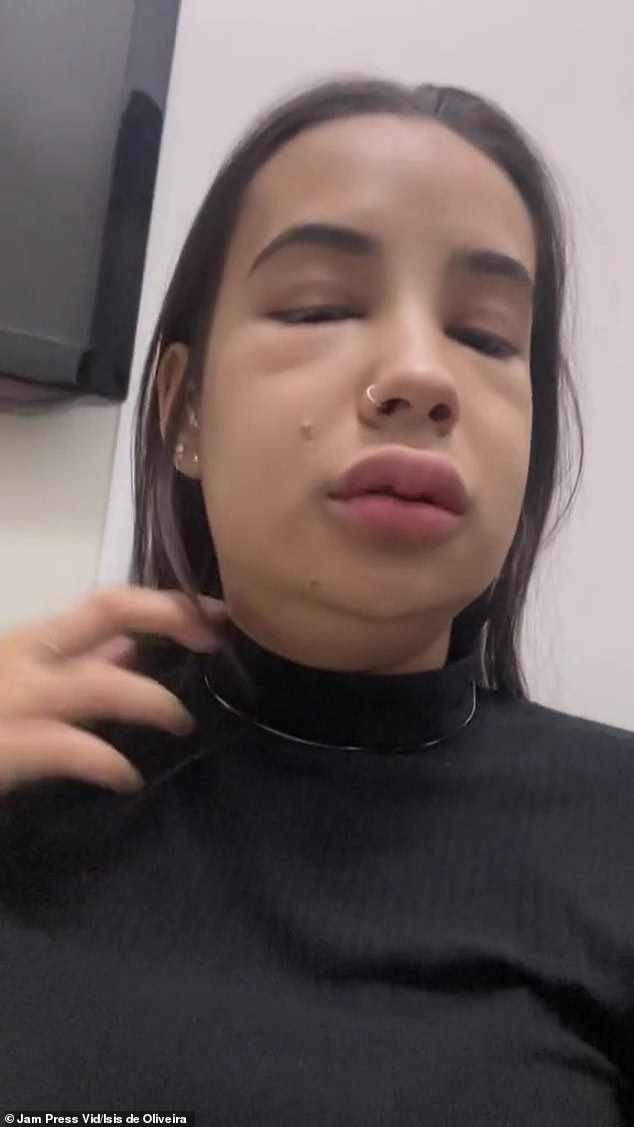 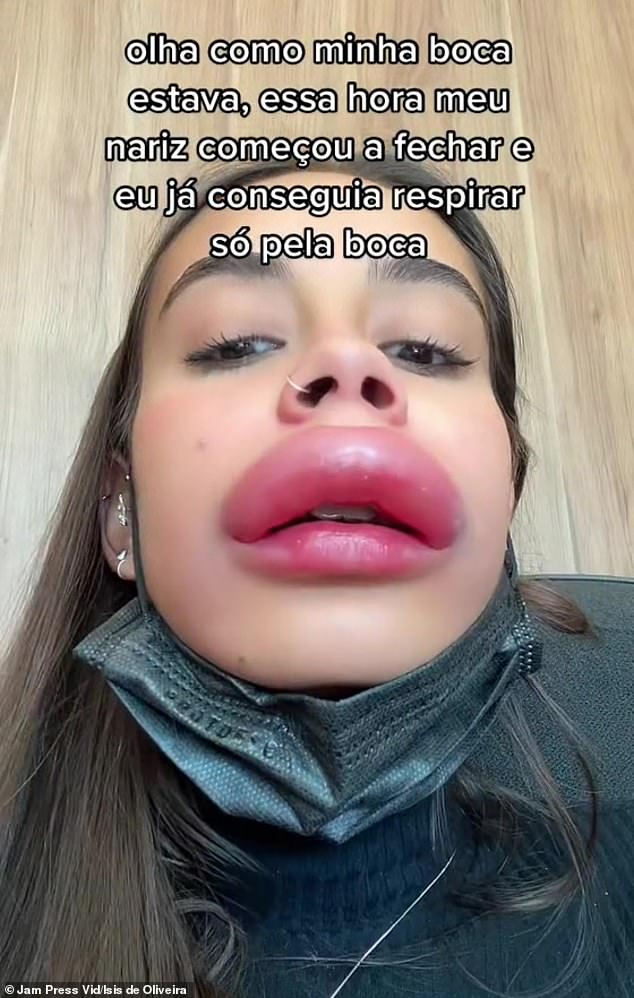 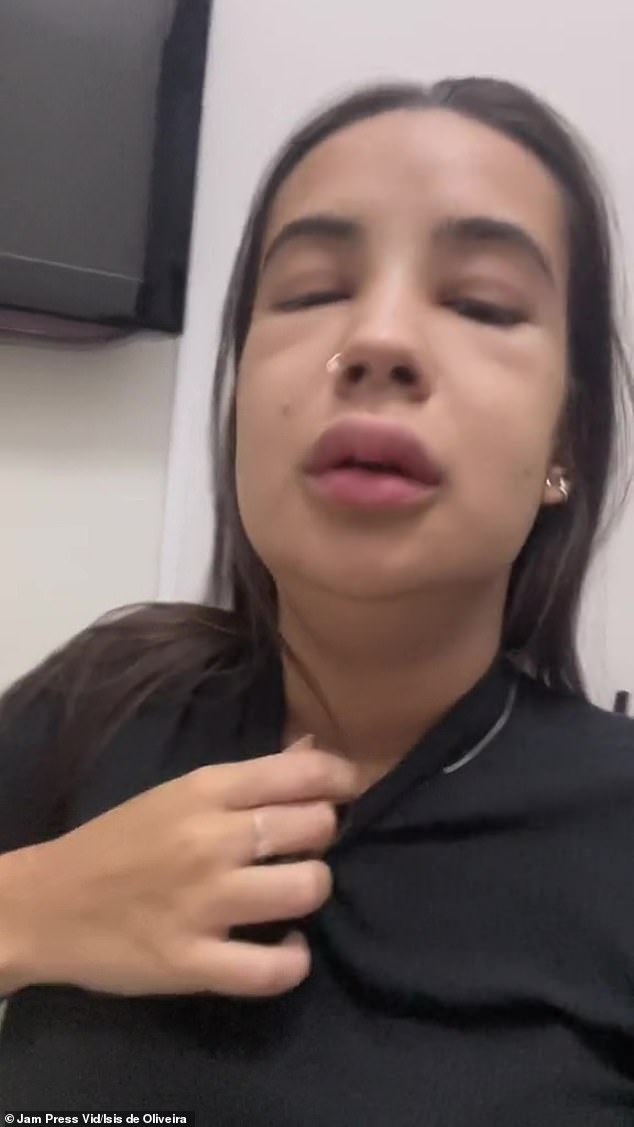 She was rushed to hospital, were they gave me adrenaline, steroids, anti-allergic drugs and the swelling started to calm down after awhile

Isis said that her face started to swell uncontrollably as soon as she was given the enzyme.

She told local media: ‘In an hour everything was already very swollen. I rushed to hospital, they gave me adrenaline, steroids, anti-allergic drugs and there was time for everything to calm down.’

She added: ‘I was very scared because it happened very fast. And I was feeling a lot of pain. My mouth hurt a lot, I couldn’t see because my eye had closed a lot.

‘I kept thinking that I was going to end up with some after-effect, that my face would end up not going back to normal. 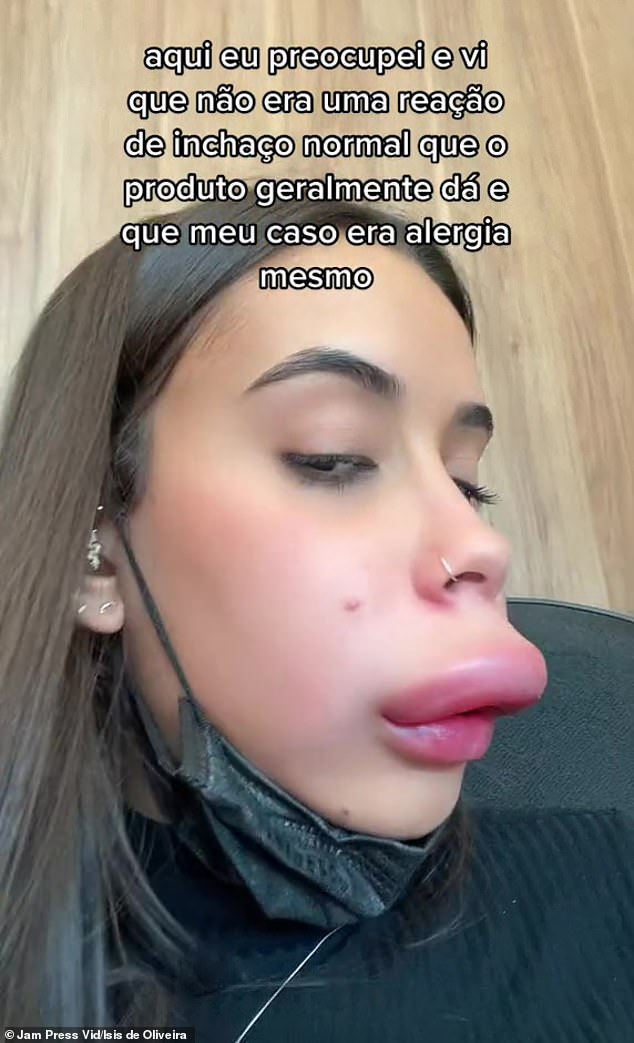 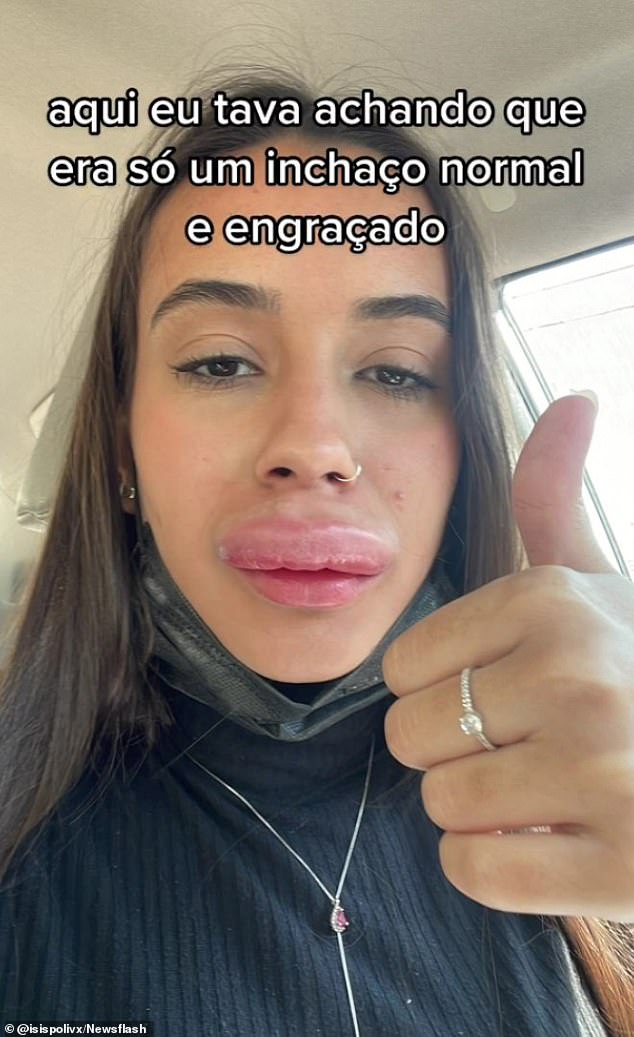 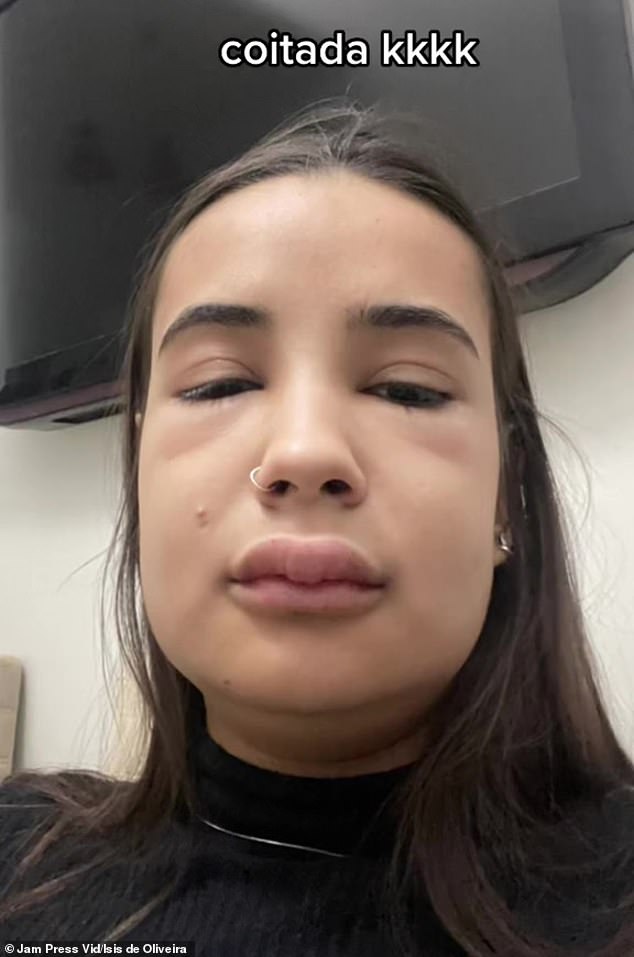 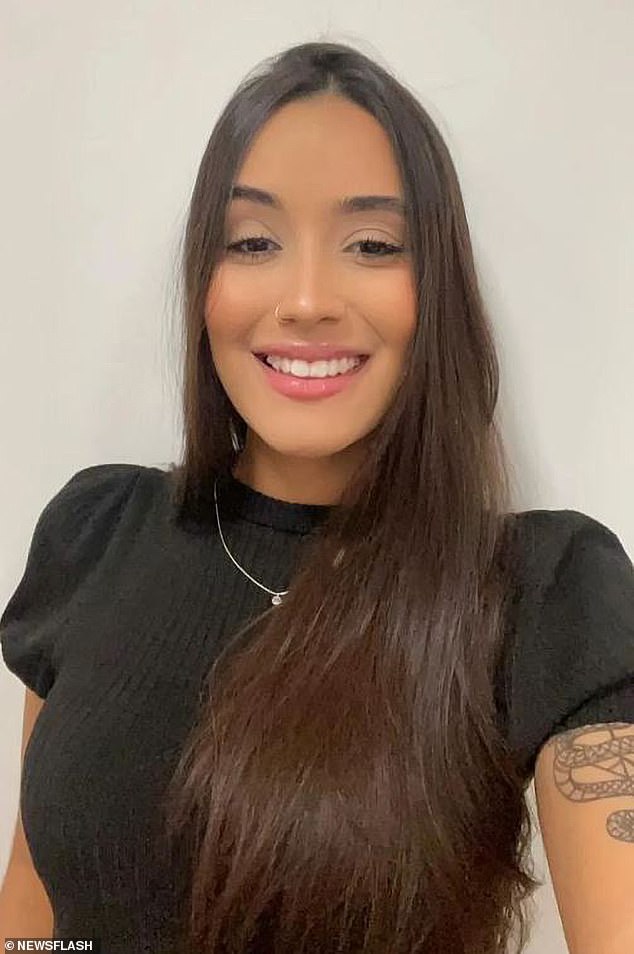 ‘I was very scared, thinking ‘my God, what did I do?’ and very scared of something worse happening.’

Isis revealed that it took four days for her face to go back to normal. She says she does not plan to get any more cosmetic procedures done any time soon.

She explained that she decided to post footage of her mishap to social media to warn others of the possible risks of such procedures, but she had no idea that it would go viral.

She said: ‘I didn’t expect it to have such an impact. I posted it to alert people because it was very dangerous and I hadn’t seen anything about it.’

Dermatologist Camila Novak – who was not involved in the procedure – told local media that had Isis not sought immediate help, she could have died.

She said: ‘An important part of the population can suffer swelling of the mucous membranes, of the lips, of the eyes, it can cause oedema of the glottis, close breathing, it can cause allergies in the whole body.’

Hyaluronidase is an enzyme that breaks down a substance in the body called hyaluronic acid.

Hyaluronic acid is found throughout the body in connective tissue, skin, and fluids in the joints and inside the eye.

In medicine, hyaluronidase is made in the laboratory and given with other drugs by injection under the skin to treat certain conditions.

Using hyaluronidase to break down hyaluronic acid helps make the fluids and connective tissue thinner so the drugs can move more easily into the tissues.