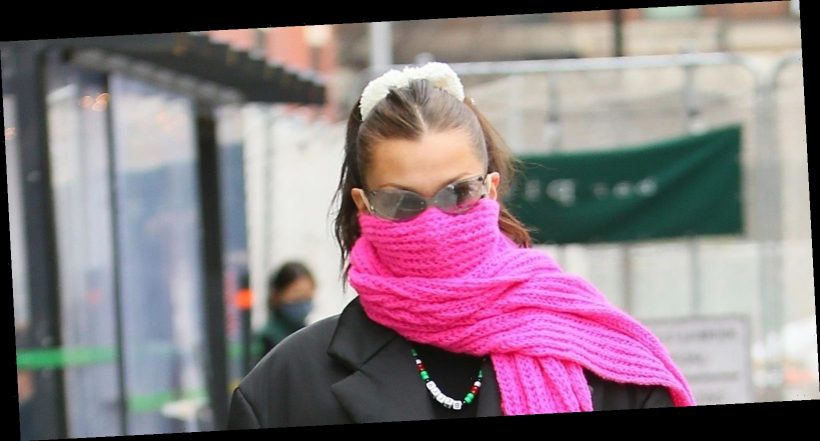 Over the weekend my boyfriend asked me if I wanted a scarf. I immediately said yes, but that it had to have a specific look and be approximately four times the length of a regular scarf. It would be ideal, I said, if it completely engulfed me while simultaneously cleaning the floor I walked on. Think that iconic photo of Lenny Kravitz looking as though he has a wool python wrapped around his entire upper half.

Clearly, Kravitz wasn't just a meme but a trendsetter, as XXL, supersized scarves are the only practical accessory all supermodels appear to be wearing these days. Maybe they were inspired by the very Acne Studios scarf I can't stop thinking about, or maybe it's the more affordable options that seem to be all over ASOS. Whatever it is, Bella Hadid is influenced — and also influencing me to go get a scarf I can live in (or at least, under).

While on her way to meet friends for lunch, Hadid wore a Prada Re-Nylon Gabardine puffer coat, a pair of high-top Dior sneakers, a ton of chunky La Manso rings, and a very long hot pink scarf. The exact scarf hasn't been ID'ed yet but I'm fairly certain once it is, it'll sell out instantly. Thankfully, hot pink scarves are all over Amazon starting at just $8. And if you feel the need to splurge on a $260 Acne Studios one, know that it will be the most stylish piece of warmth money can buy.

Supersized scarves also work twice as hard as any other winter accessory because you can easily wrap them around your face for even more protection on top of your double face masks. And if you are Bella Hadid, it works triply hard to keep you incognito against paparazzi. Although as the supersized scarf trend becomes more popular, they're likely to make you look more like a supermodel instead of less, which I'm also absolutely here for.