Victoria’s latest lockdown to prevent the spread of coronavirus affected jobs and wages across the country, with new data revealing the ongoing economic damage from the COVID pandemic.

The Australian Bureau of Statistics reported the number of people on business payrolls fell by 0.9 per cent in the fortnight to June 5. The biggest hit came in Victoria where jobs on payrolls tumbled by 2.1 per cent. 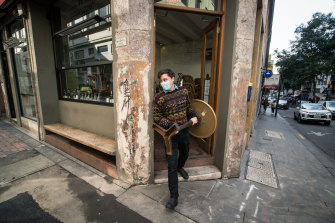 Victoria’s lockdown resulted in a 2.1 per cent drop in the number of people on business payrolls.Credit:Getty Images

Every state and territory bar the Northern Territory suffered a fall in payrolls over the period that covered part of the Victorian lockdown, which started on May 27.

Payrolls fell by 1.1 per cent in both Tasmania and the ACT while in NSW they fell by 0.6 per cent.

The drop in people working also had a substantial impact on wages. Total wages paid across Victoria over the period dropped by 2.8 per cent while in Tasmania they edged down by 2 per cent.

Lockdowns continue to hit the hospitality sector the hardest. The payrolls of accommodation and food service businesses in Victoria dropped by 10.2 per cent in the fortnight while they dropped for similar businesses in Tasmania by 3.5 per cent and in South Australia by 3.3 per cent.

The bureau’s head of labour statistics, Bjorn Jarvis, said the data covered the first nine days of the Victorian lockdown, which was extended from its initial seven-day duration.

“Each lockdown sees falls in accommodation and food services payroll jobs, reflecting the impact that restrictions have on this industry,” he said.

“While the fall in payroll jobs is generally greatest in the state or territory of the lockdown, restrictions that affect interstate travel may also contribute to falls in payroll jobs in the accommodation and food services industry in other states and territories.”

Small businesses continue to be most affected and younger Australians lose work much faster than their older counterparts. Payroll jobs among teenagers dropped by 2.6 per cent during the fortnight but increased by 0.5 per cent for those over the age of 60.

Recent unemployment figures show the jobs market back to where it was before the pandemic rocked the economy in March last year.

However, the payroll data shows much of the recovery in jobs has been in particular areas. The number of people on payrolls in the public administration and safety sector is 12.5 per cent higher than in March last year while across the financial services sector they are 7.6 per cent higher.

Job numbers in accommodation and food services are down by 12.3 per cent while in information media and communications they are down by 9.6 per cent.

Senior Westpac economists Justin Smirk and Lochlan Halloway said the figures suggested there was still a negative impact caused by the end of the JobKeeper wage subsidy being felt across some sectors.

“With JobKeeper no longer providing cash flow support, firms may have a higher propensity to shed workers during periods of revenue stress,” they said.

“Our estimates suggest that JobKeeper was supporting around one in every 10 employees in accommodation and food services, making it one of the most reliant industries on the subsidy.”