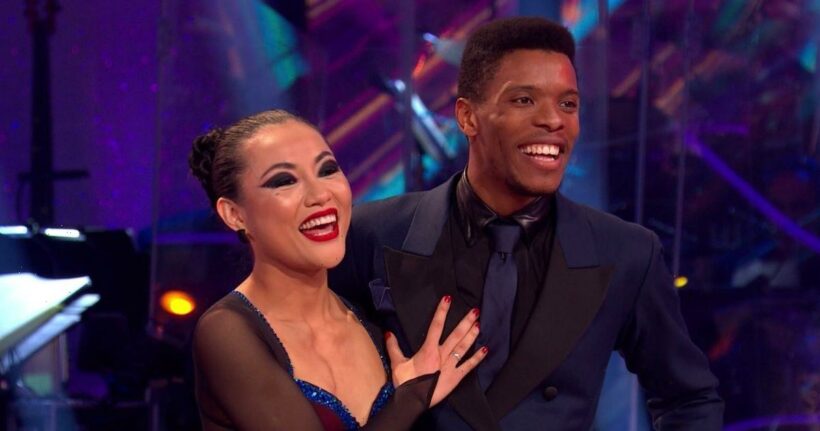 Rhys, 28, and Nancy, 30, received a standing ovation from the audience as they danced to Phil Collins' In The Air Tonight, and went to score an impressive 39 out of 40 from the judging panel.

Judge Anton Du Beke told the pair they "nailed it", while Craig Revel Horwood praised Rhys, telling him he "did a fantastic job".

Get exclusive celebrity stories and fabulous photoshoots straight to your inbox withOK!'s daily newsletter. You can sign up at the top of the page.

Backstage, Rhys and Nancy chatted to Claudia Winkleman as they discussed their score and dance routine.

Claudia cheekily asked the star what his girlfriend thought of his dancing, to which he replied: "Beth said… 'If I'm not jealous, you're not doing it right'."

Turning to address viewers at home, Rhys then jokingly pointed at the camera before exclaiming: "So Beth, I hope that you're proud, and furious!"

Claudia added: "Yeah, livid! Tearing up all the photographs of you both together…", as Nancy and Rhys fell about laughing.

The revelation of Rhys' relationship status surprised viewers, with the CBBC presenter usually keeping his personal life out of the spotlight.

The comment marked the first time his girlfriend Beth had been mentioned, ultimately confirming he is in a relationship after speculation about whether he was single or not during his Strictly stint.

One viewer took to Twitter to exclaim their surprise, writing: "Wait, what? Rhys has a girlfriend? Why has that not come up before?", as others laughed at the star's comments on during the BBC one show.

As Rhys continues to keep his personal life private, the details of his and Beth's relationship remain unconfirmed.

John Whaite and Johannes Radebe came in third with an impressive 32 out of 40, closely followed by Dan Walker and Nadiya Bychkova who scored 31, and AJ Odudu and Kai Widdrington with 30.

Dan and Nadiya became the tenth couple to be eliminated from the competition, having faced AJ and Kai in the dance-off.

Strictly Come Dancing continues on Saturday on BBC One.

For more gossip on all things Strictly Come Dancing, sign up to our daily newsletter here .