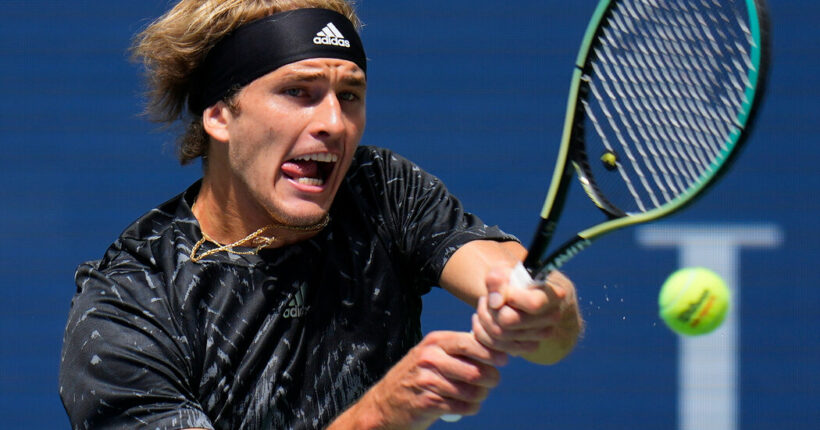 Alexander Zverev is playing the best tennis of his career.

He stretched his winning streak to 12 matches on Tuesday with a clinical, 100-minute demolition of Sam Querrey, the hard-serving American who is always dangerous on hardcourts. Zverev is one month removed from knocking off the world No. 1, Novak Djokovic, in the Olympic semifinal and winning the gold medal in men’s singles, which he followed by winning the Western & Southern Open near Cincinnati, a top-level event on the men’s tour and the main tuneup for the U.S. Open.

But as he prepares to face Albert Ramos-Viñolas of Spain in the second round of the U.S. Open on Thursday, he continues to fend off allegations of domestic violence from a former girlfriend that have become the elephant in the room, one that neither the ATP Tour nor Zverev can ignore any longer.

As Zverev’s stature on the court has grown this summer, so has attention to the accusations. Last month, leaders of the ATP announced a review of how the tour handles players accused of domestic abuse. Zverev went to court in Germany last week to contest publication of a lengthy article in Slate that details accusations from a former girlfriend, Olya Sharypova, a former Russian tennis player, that Zverev repeatedly abused her.

Sharypova has not filed any criminal charges over the incidents, which she says took place in 2019.

Zverev, 24, a German, has repeatedly and categorically denied ever abusing Sharypova. In recent days, he has pointed to the German court’s decision late last week to issue an injunction against Slate and the author of the article, Ben Rothenberg, from publishing the allegations without more substantial evidence as a confirmation of his innocence.

Rothenberg is a freelance tennis journalist who sometimes writes for The New York Times. He and Slate have stated they stand by the reporting in the article, which Slate has not removed from its website or blocked from readers in Germany, despite the injunction from the German court.

“We stand by our fair and accurate reporting based on multiple sources and interviews,” Katie Rayford, Slate’s director of media relations, said in a statement.

The initial decision from the court in Germany, where the libel and defamation standards are more stringent than in the United States, was far from a final word on the matter.

The hearing in the court in Berlin took place without the participation of Slate or anyone except Zverev’s lawyers. The decision stated Zverev’s lawyers made a credible argument that the accusations were not true, but the court did not hear testimony from the other parties involved, and it’s not clear how the ruling will be enforced.

The court, however, agreed with his argument that the evidence presented in the article was not sufficient under German law to justify the impact on him. The decision stated that such an article needed to have enough balance so that it did not leave the impression that Zverev was guilty of the acts Sharypova accused him of committing.

Sharypova, who was not a named defendant in Zverev’s complaint, continued to make claims against him on Instagram after the ruling, writing that she was not afraid of Zverev, his family or his legal team, though she has since taken down the post.

“I said the truth and you’re going to court to try to win it with a lie?” she wrote. “Nice try to scary me, but I have nothing to be afraid of.”

After his first-round win on Tuesday, Zverev said he planned to push ahead with the legal battle to clear his name.

“I think my statement was very, very clear, and I think the German court system is also very clear,” he said.

“I will not let that sit on me, and that’s it,” Zverev said of the accusations. “I’m not going to comment on it any further because, to be honest, I have been dealing with it for a long time now.”

Days before the Slate article was published, the ATP Tour announced it would review its strategy for handling players who are accused of domestic abuse or sexual misconduct. The major North American sports leagues took similar actions years ago.

Critics of the ATP, including active players, have long asked for similar action from their own association. Until now, the ATP has waited for legal proceedings to conclude, a process that can take years, before issuing its own penalties or punishments for players.

Last month, the leaders of the tour said they had commissioned a report from a panel of independent experts to recommend a new policy for more proactive involvement.

“Abuse has a profound and lasting impact on millions of victims each year,” Massimo Calvelli, chief executive of the ATP Tour, said in a statement announcing the creation of the panel. “When abusive conduct or allegations are related to any member of the tennis family it can also impact the public’s trust in our sport. We recognize that we have a responsibility to be doing more.”

Coming up with a uniform policy for tennis might be easier said than done. Seven major organizations run the sport. Scores of players have signed on to a new players association that Djokovic and others are attempting to create. The sport operates and the players live all over the world, and legal standards differ from one country to the next, though that may be the strongest reason for the need for a single abuse policy.

Andy Murray, a former No. 1 who is a member of the ATP Player Council and has lobbied for a change in the policy, applauded the move on Monday.

“Obviously it was something that needed to change in terms of how some of the situations have been handled, I think, this year,” Murray said. “I just didn’t really feel like the sport had much of a sort of stance on it really.”

Zverev said he, too, supported a new policy for abusive behavior, though he has not committed to participating in an independent investigation by the ATP Tour that could be included in such a policy.

Amid the allegations and legal proceedings, he has somehow managed to play the best tennis of his career. Midway through his semifinal against Djokovic at the Tokyo Games, Zverev abandoned caution and began blasting away with his serves and returns. Zverev rendered one of the best players ever to play the game helpless.

He has not let up since, putting on another show on Tuesday against Querrey. He blasted 18 aces, won 60 of 74 points on his serve and never faced a break point. He credited his success on the court with his happiness off it.

“The past year has been very, very good for me,” he said during his on-court television interview after the match. “I have had a lot of success on the court. I also enjoy life outside the court.”