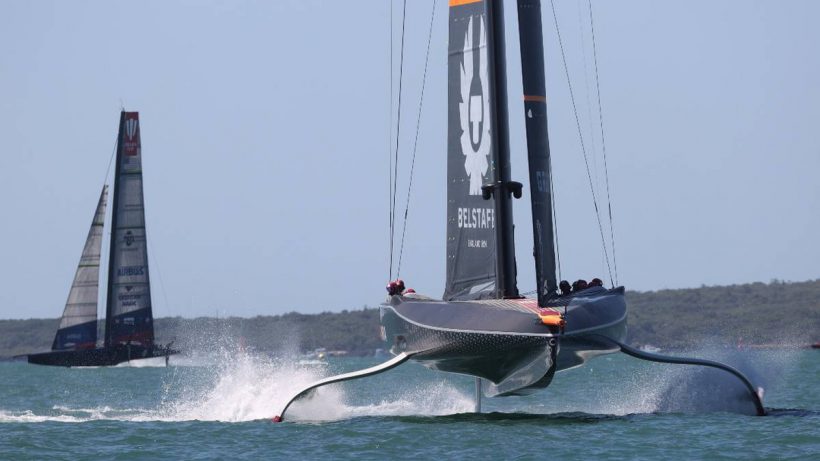 The lame duck of the America’s Cup is no more. In its place, a formidable – and undefeated – challenge.

Ineos Team UK struggled to just finish races in the America’s Cup World Series in late December, but have come flying out of the gates for the Prada Cup Challengers Series with two wins on the opening day of racing.

With the draw dealing the British challenge two races on day one, there was plenty of interest in how the Brits would bounce back. In short, they did so impressively.

After beating American Magic by 80 seconds in the opening race of the day, they repeated the dose against Luna Rossa in race two, with their 28-second win seeing them take two points from the day and leaving their opponents yet to get off the mark.

“That’s another one for the guys back in the dock,” team skipper Sir Ben Ainslie said after the race.

“We couldn’t be happier with how the boat went around the track today; they’ve done an awesome job.”

It was the dream start for Team UK, who got the luck of the conditions on day one.

The team have made it clear they favour the higher breeze. Today, they sailed in winds of up to 15 knots, while Saturday is expected to but much lighter – with predictions being below 10 knots.

After a smart start from Ainslie landed Team UK on the right side of the course, they took the upper hand early over Luna Rossa and never relinquished it.

It was a similar story in the first race. The better wind was on the right side of the course and the British syndicate played their hand perfectly to ensure they were sailing with the best of the conditions.

“The right hand side was stronger, North head as we saw in the races a couple of weeks ago.…quite a big feature,” Ainslie noted.

“Giles [Scott] did a great job calling the breeze and the guys sailing the boat fast and the handling. It was a good team effort.”

In the two races, Team UK didn’t trail at a single gate and reached speeds of up to 43 knots.

At times it appeared as though they were having to work hard to maintain stability in flight, but they sailed with confidence and, while wobbly at time, they never looked like losing their handle on their vessel.

Dean Barker, meanwhile, said the opening race was a tough one but they were simply out-paced by a boat his team expected to be fast and was confident the team would bounce back.

“We knew going into today that they were going a lot better from what we’d seen in the practice racing and, while it may be a surprise for some, we definitely knew it was going to be pretty close,” Barker said in his post-race interview.

“It’s early days, it’s one race, we obviously would have much preferred to have come out with a win, but at the same time, it’s a long series and we’ve got to keep improving. Nothing really changes for us.”

Follow all the Prada Cup racing action live on nzherald.co.nz and listen live on Gold AM on radio or via iHeart.