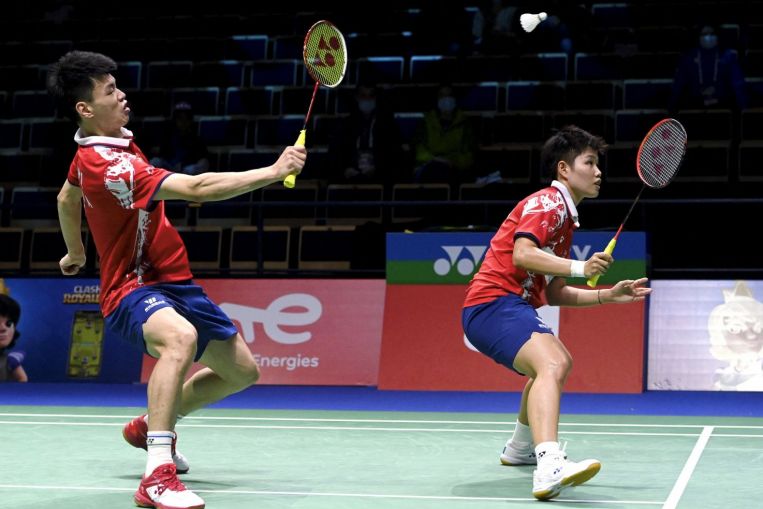 Seo, ranked No. 6 in mixed doubles, is newly paired with Shin, who ranks No. 4 in women’s doubles.

“It’s the same difficult to play the opening match as the deciding match. We don’t know too much about the opponents. It needs lots of adjustment,” said Huang.

“They pushed us a lot and we had lots of tough play, attacking and counter-attacking.

“Many fans believe that we can always win, which is a high expectation for us. We try to turn it into motivation for victory,” said Huang.

“After my victory, our team had things under control,” said Shi.

“I don’t want anything unexpected to happen again,” he added. “I could feel Heo might not want to trap in the fight in the second set and hoped to determine the game in the third. However, I took advantage of it with great confidence.”

In the women’s singles, Olympic champion Chen Yufei showed a similar game to Shi when losing the first game 14-21. But she got back on course and grabbed the win 21-15, 21-15.

Before the semi-finals began, Chen had made preparations for all kinds of situations, including China leading 2-0, level at 1-1 or even falling into a 0-2 hole.

“It feels so great to win the match. I’m very happy to help the team reach the final,” said Chen.

“I was so excited and impatient in the first set, thinking about sealing the victory for China as soon as possible. I knew exactly what was going wrong and tried to regain the tempo which I’m getting used to in the following two sets,” said the 23-year-old.

Winning the Tokyo 2020 gold did not change her attitude. Chen said she is always willing to restart from a mentally lower position.

“Everyone wants to challenge me, and I’m happy to take that. I enjoy the excitement of meeting challenges from others, because I’m also a big challenge for them,” she said.

The final will be on Sunday, with the 11-time champions facing Japan, who beat Malaysia 3-1.

Lee Zii Jia won Malaysia’s only point when he edged out Momota 22-20, 21-19 to cut the deficit to 2-1, before Japan scored the winning point in the women’s doubles.