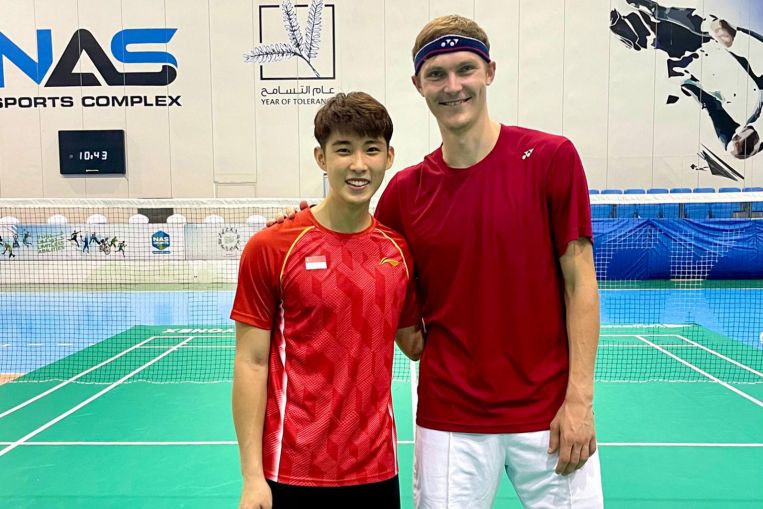 SINGAPORE – Loh Kean Yew has his sights set on joining the world’s elite badminton players and who better to learn from than newly crowned Olympic men’s singles champion Viktor Axelsen?

One month after Tokyo 2020, Loh now finds himself in Dubai after Axelsen invited him, along with four other players in the men’s top 60, to train with the Dane at his new base at the Nad Al Sheba Sports Complex for a month.

The world No. 40 shared that Axelsen had approached him back in early 2020, around the time when he had pushed the world No. 2 to three games at the Spain Masters’ round of 32. But the plans were put on ice after the one-year postponement of the Olympics due to the coronavirus pandemic.

Loh told The Straits Times: “I’m glad he asked me and Singapore Badminton Association (SBA) and my coaches agreed to the arrangement.

“It is an eye-opener to train with Viktor. He is of a different level and has so much quality in his shots. His smashes, especially, are very hard to retrieve, and I’m trying my best to keep up.

“Besides Viktor, I will also be able to train with, and compete against, players from different parts of the world with different styles.

“With Paris 2024 in mind, as well as upcoming competitions such as the World Championships in December and next year’s Commonwealth, Asian and SEA Games, these training camps will help me improve and increase my chances of doing well at future tournaments.”

The SBA also hopes he will “gain valuable experience from the training camp with Viktor and the other players during this period” and added that it is supportive of similar plans for all its players.

The first two weeks of the programme comprised more drills and interval training, while the second half will involve more match play.

Loh described the sessions as shorter but more intense than what he has been used to in Singapore. He also noted his improvements with overseas exposure, including a three-month stay with Denmark’s Langhoj Badminton Club in 2018. The following year, he captured the Thailand Masters by beating Chinese legend Lin Dan in the final.

He said: “Similar to Singapore, we have one morning and one afternoon session, but instead of 21/2 hours, it is around 11/2 hours over here. While we may work on a certain drill for around 30 minutes in Singapore, we do shorter repetitions of three to five minutes here as we rotate among the different players.”

There are other things for Loh to get used to in Dubai, including cars being left-hand drive, but he is relishing the chance to train at a world-class facility that boasts of a gym, ice bath, sauna and other amenities.

Axelsen, who had stints at the complex in 2018 and 2019, and also trained in Dubai in the build-up to Tokyo 2020, said: “In one room you can simulate altitude training at up to 2,000m altitude. In another, you can simulate humidity. In the third, you can get cryotherapy, where you cool the body down to increase blood circulation.

“There are underwater cameras in the pools, so all your movements are recorded when you recover after an injury.”

The 27-year-old, a bronze medallist at Rio 2016, had stunned the badminton world by relocating to Dubai, which means that while he will still represent Denmark, he will not be training with his national team.

This led to criticism back home, as some felt the move would deprive Danish players of a top sparring partner while strengthening his current team of international rivals.

However, Axelsen stood by his decision, which took into account his respiratory issues during Denmark’s pollen season, as well as family time with his girlfriend Natalia Rohde and 10-month daughter Vega.

He said: “I will always chase the extra per cent. I always dreamt of creating my own training facility and I live to challenge myself.

“My asthma and hay fever reduce my lung capacity by 15 to 20 per cent during summer in Denmark. I have been looking for a way to avoid it for many years so I can exercise optimally.