Europe will take a two-point lead into the final day of the 17th Solheim Cup after withstanding a determined fightback from the United States on day two in Toledo.

The home side won three of the morning foursomes to close the gap to a single point and led in three of the afternoon fourballs at one point.

That advantage looked set to be a single point until Mel Reid and Leona Maguire snatched a half against Jennifer Kupcho and Lizette Salas on the 18th, Reid getting a fortunate bounce off the bank of a bunker to set up a birdie from close range.

Matthew revealed she had a birds-eye view of Reid’s shot, adding: “I was actually sitting right there. Saw it coming, was watching it, watching it, thought, hmm, maybe it will go in the bunker, and then did get quite a fortunate bounce there just to cut through the rough.

“Every half point, I’ve realised over the years, is absolutely crucial. From the start to the day it looked like the momentum was kind of heading towards the US, but kind of edged back a little bit in the afternoon and that half point has buoyed us up I think.

“(We’re) very confident. Two-point lead, we would have taken that when we teed off the first round. So yeah, delighted to be going in with a lead.”

Yealimi Noh and Mina Harigae defeated Celine Boutier and Sophia Popov 3 and 1 in the first fourball match to level the overall score, but Hull and Pedersen beat Danielle Kang and Austin Ernst 4 and 2 moments before Ciganda and Madsen edged out Jessica Korda and Megan Khang on the last.

In the morning foursomes, Maguire had teamed up with Reid for the pair’s second foursomes success on Sunday, thrashing world number one Nelly Korda and Ally Ewing 5 and 4.

That gave Europe a four-point lead in pursuit of only a second victory on US soil in the contest’s history, only for the home side to win the three remaining matches to close the gap to a single point.

Reid and Maguire won four of the first five holes and although Korda produced a rare moment of magic to eagle the 13th and keep the match alive, it only delayed the inevitable and the European pair secured victory on the next.

“I think it was a pairing neither of us saw coming, but the captains obviously saw something in us that we didn’t see in ourselves,” said Maguire, who is the first Irish player to appear in the contest.

“And I think we’re both fearless on the golf course, which is something you need to be in those matches, especially given the pairings we were up against.

“I mean, Nelly and Jessica yesterday, Nelly and Ally today, world-class players, and we really had to be on our “A” game to come out with a point.”

Maguire let out a huge roar after holing the winning par putt on the 14th and added: “We played great all day and it was great to finish it off in style and not have to go down another one.

“Mel holed a lot of clutch putts today, so it was my turn to finish it off in style.”

The remaining matches were all much tighter affairs and Kang and Ernst edged out Hall and Madelene Sagstrom on the 18th.

The European pair were two up after making birdies on the opening two holes, but lost the fourth, sixth and seventh to fall behind, won the eighth and 10th to get back in front and then lost the 13th and 14th to trail again. 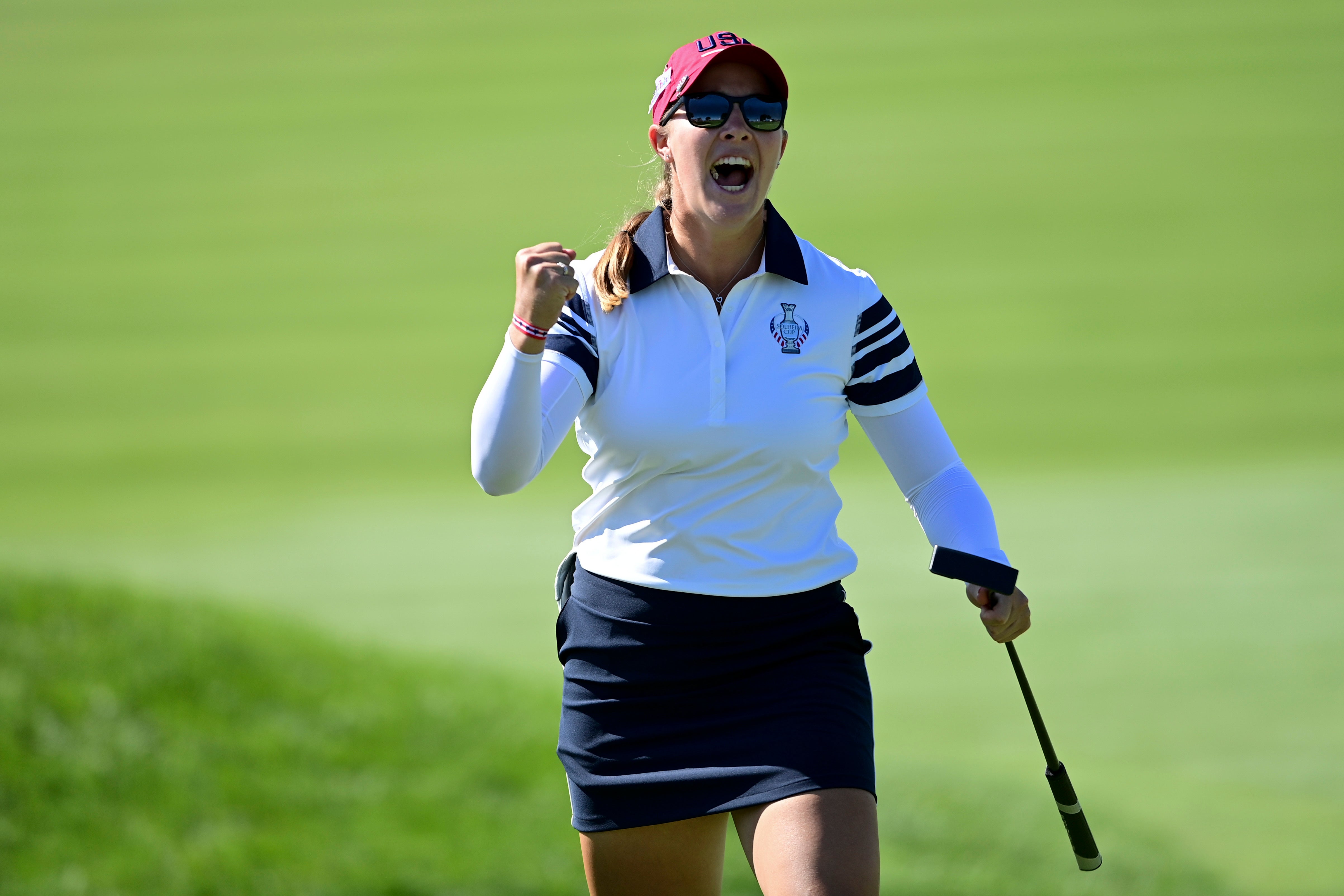 Hall holed some superb par putts to keep the match alive, but was unable to birdie the 18th to snatch half a point.

Moments later, Lexi Thompson’s long birdie putt on the 17th sealed a 2 and 1 victory for her and Brittany Altomare over Hull and Emily Pedersen.

Salas and Kupcho completed an excellent session for the home side with a 3 and 1 victory over Anna Nordqvist and Matilda Castren, who had won both of their matches together on Saturday.

Two birdies in the first seven holes took the European duo two up, but they lost the eighth to a bogey six and also lost four holes in a row from the 14th to see Europe’s overall lead cut to a single point.