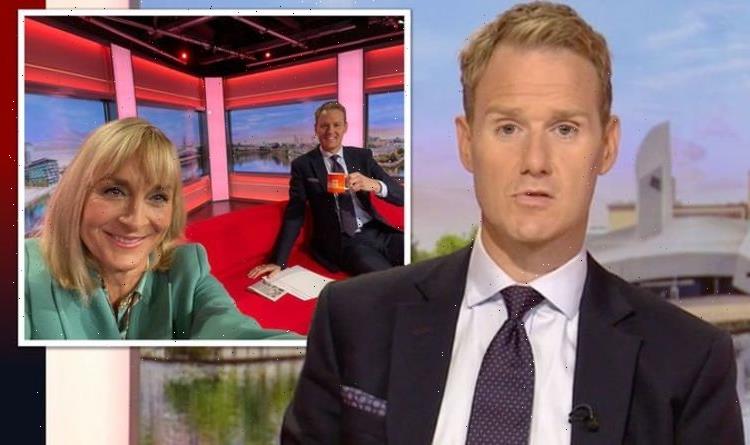 BBC Breakfast presenter Dan Walker took to Instagram last night to share a string of pictures to illustrate his weekend. The TV star made a last minute edit to his post after getting told off by his co-star Louise Minchin for posting too many images of meat following a BBQ.

To make it up to his colleague he posted an additional picture of a salad and another of his adorable dog Winnie, much to the delight of his followers.

Alongside the pictures, he explained: “I got told off by @louiseminchin last week for posting too much meat so… here is a salad.”

The accompanying photo appeared to show a broccoli coleslaw dish.

Rounding up his weekend, he added: “The BBQs were out again, friends were round for church and food and the pulled pork went down a treat (we got a Boston Butt joint from @farmisonuk).

“Random photo of Winnie just because I can. I hope you all had a lovely Sunday,” he signed off, in view of his 206,000 followers.

“Salad!!” exclaimed Louise followed by three laughing emojis when she took to the comments section of the post.

“I agree with Louise Minchin.. it clearly hasn’t stopped you though! Don’t like meat picture either,” another follower chipped in.

“All looks gorgeous but Winnie steals the show as per,” another user added.

“@louiseminchin I’m really going to miss you as you brighten the start of the week. Can’t believe you’ve only 6 breakfasts…” a fourth said.

Last week Louise, who has been a part of the BBC breakfast show for almost 20 years, announced that she will present her very last show on September 15.

While talking about her last day on the live show, Dan accidentally revealed the start date of Strictly Come Dancing 2021, which he is starring in.

“About time someone told us the start date for #Strictly this year #Sorry #StrickiLeaks,” he wrote on his own account alongside a video of his co-star Tom Fletcher.

He added a grimacing face and laughing emoji to the post.

Speaking with his co-host on Wednesday’s show, Dan pointed out that Louise’s leaving date was good timing as she would be able to watch him in action on Strictly.

“I was just going to put your date in the diary,” he began.

“I meet and greet the partner in a couple of days time, and actually the first show is on the 18th and then the live shows start on the 25th,” he continued without realising the error.

At the time, Strictly Come Dancing had not officially announced the start date of series 19.