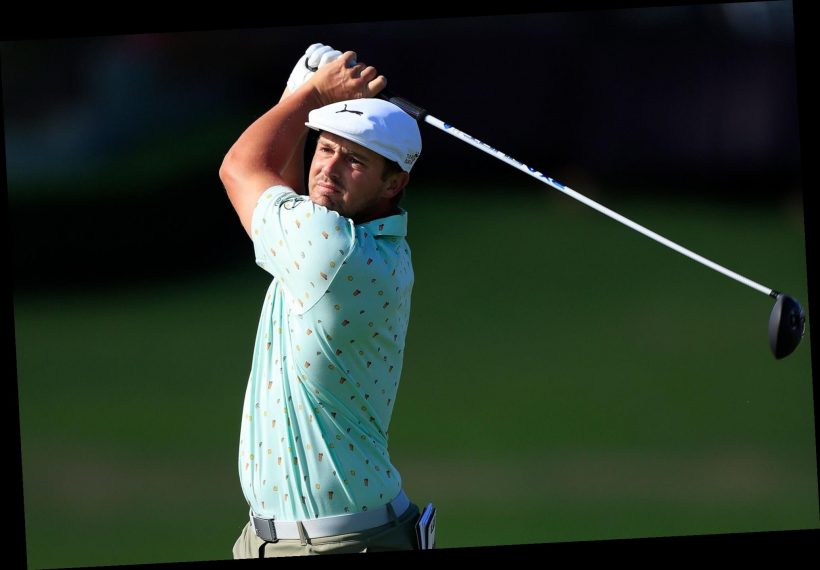 Rickie Fowler admits how 'frustrating' his slump really is

Those were the words Bryson DeChambeau’s caddie, Tim Tucker, playfully uttered to three reporters standing inside the ropes at the sixth tee during Thursday’s opening round of the Arnold Palmer Invitational at Bay Hill.

The sixth hole at Bay Hill is a par-5 that has become a mini tournament within the tournament this week with DeChambeau being the only player in that field. It’s 555 yards from tee to green the conventional way, via ground travel, as the fairway winds right-to-left around a large lake en route to the green.

DeChambeau, who measured it as a 340-yard carry over water from tee to green, twice tried to drive the green in his Wednesday practice round with both balls falling some 30 yards short into a watery grave.

The wind was into the players’ faces on Wednesday.

On Thursday, the wind was quartering from right to left, helping a little bit, which led to speculation that DeChambeau may give it a go. He’d nearly driven the green on the fifth hole, a 390-yard downhill par-4, moments before arriving to No. 6.

So, spectators — more interested in getting a good glimpse at DeChambeau, golf’s latest circus act, than showing any concern about social distancing — crammed against the ropes around the sixth tee in anticipation.

That’s when Tucker emerged from outside the ropes and made that crack to the three reporters. When pressed, Tucker joked, “This will test his IQ,’’ referring to whether his man, who was 4-under par and a shot out of the lead at the time, would risk it.

When DeChambeau got to the tee a few moments after Tucker, he playfully pulled a 3-wood out of his bag, eliciting a chorus of disappointed moans, and then he lifted driver out and ripped the head cover off of it to approving applause.

Still, though, he opted not to take the aggressive approach and hit his drive only 309 yards safely onto the fairway, from where he would birdie the hole en route to an opening-round 5-under 67, which has him one shot out of the lead held by Rory McIlroy and Corey Conners.

DeChambeau said when he played the fourth hole, which runs opposite of No. 6, and felt the wind into his face, he thought, “Man, it may be possible [to go for it on six] if the wind kind of flips a little bit.’’

When he got to No. 6, though, it just wasn’t downwind enough.

“There was definitely a high expectation level of me trying to go for the green,’’ DeChambeau said of when he arrived at the tee and heard the fans clamoring. “It was a little pressure that I wasn’t expecting. It was fun. The crowds were great with it. I pulled out [3-wood] as a joke off the tee box. For me, it was just too much off of the right and more into the wind than anything.

“If it’s more downwind, I’ll be able to do it [Friday] hopefully, or sometime during the weekend.’’

DeChambeau said if he has 10-mph downwind conditions, “I’ll for sure go for it.’’

This is the fascination surrounding DeChambeau, who draws crowds curious about what amazing thing he might do next with a golf club the same way Tiger Woods always has and the way John Daly used to — though the Daly crowds were car-wreck rubberneckers as much as they were in awe of his raw length.

Jordan Spieth, who played with DeChambeau on Thursday, said when he plays with DeChambeau, he finds himself “bumping’’ his caddie, Michael Greller, and wondering aloud, “Where is this one going to start?’’

Spieth already was anticipating what his playing partner may do Friday at No. 6.

“I think [Friday’s] going to be a northeast [wind], so hopefully I can just tee off first and get out of the way and then just watch,’’ he said. “With that wind [Friday], it could get a little exciting. I mean … you’re lying if you’re not saying you’re interested and going to be entertained.’’

The only shame is that Arnold Palmer, the tournament’s late host, is not around to witness the DeChambeau act, because few players the game has ever seen played it with the kind of flair and bravado that the “King’’ did.