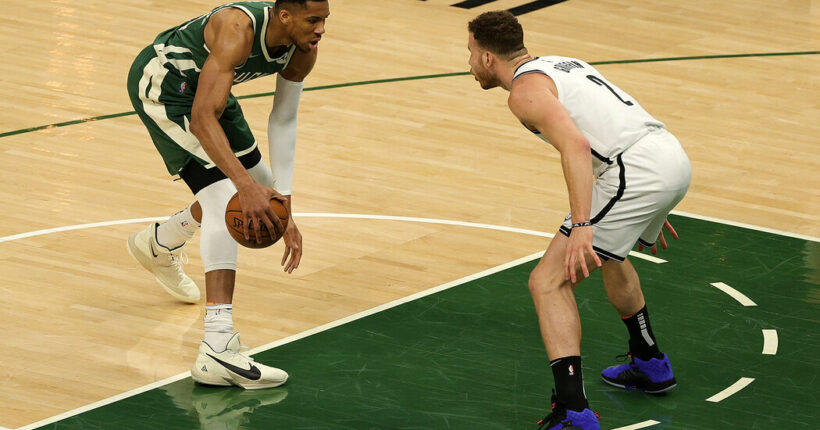 To get a much needed win on Thursday, the Milwaukee Bucks did the opposite of what got the team so far in the playoffs: They slowed down their play.

It wasn’t pretty. It wasn’t terribly efficient. But it was enough to let their stars, Giannis Antetokounmpo and Khris Middleton, break through.

In a throwback game that would have seemed at home in the 2000s, the Bucks squeezed out a victory Thursday night over the Nets, 86-83, and narrowed Brooklyn’s lead in the Eastern Conference semifinal series to two games to one.

For the Bucks, it was an admirable recovery from their Game 2 performance, when the Nets thumped them by 39 points.

This time, the Bucks crawled to victory.

During the regular season, the Bucks were fast — second in pace only to the Washington Wizards. On Thursday night, the Bucks generated offense by giving the ball to Antetokounmpo and Middleton. They either isolated them one-on-one or created shots through grinding screen-and-rolls to get near the basket. Throughout the game, the Bucks had only seven fast break points. During the regular season, they averaged 14.5, good for fourth in the N.B.A.

“Personally, I enjoy fast paced, finding my teammates for a lot of 3’s, high-scoring game, obviously. But at the end of the day, it was a very low-scoring game,” Antetokounmpo said.

The slower pace allowed the team to get the ball to Antetokounmpo and Middleton, who have seven All Star appearances between them, and get out of the way. They combined to score 68 of Milwaukee’s 86 points. The duo played almost the entire game. Antetokounmpo shot 14 for 31 from the field (45.1 percent) and Middleton was 12 for 25 (48 percent).

Most of their damage was done in the opening period, when the Bucks led by as many as 21 points, with the home arena at the Fiserv Forum at their backs. Antetokounmpo and Middleton scored all of the Bucks 30 points in the first period, and Milwaukee entered the second period leading, 30-11.

“I think there was a little bit of setting the tone,” Bucks coach Mike Budenholzer said after the game. “Those two guys having a big first quarter, they’re our leaders. They’ve been here a long time. They’ve been through a lot together.”

He added: “It doesn’t matter how you do it at this time of year. You just have to find a way to get it done.”

Yet the Nets quickly recovered in the second quarter. The Nets even took the lead in the fourth period on a Kevin Durant 3-pointer with 1:23 left in regulation. But a Middleton layup stanched the bleeding, and his free throws with 2.1 seconds left didn’t leave much time for the Nets to get a quality shot to tie the game. (Durant’s desperation 3 still almost went in.)

This was the kind of game where Antetokounmpo’s considerable strengths and weaknesses were on full display. In the first quarter, Antetokounmpo attacked the rim relentlessly, and was able to get himself multiple dunks in the way that has made him a star. He got his primary defender — Blake Griffin — into early foul trouble.

But after the opening quarter, Antetokounmpo’s flaws began to manifest. The Nets left him wide open from the perimeter, and Antetokounmpo obliged the Nets by shooting lots of 3’s. He was 1 for 8 from deep, and those missed shots helped the Nets, who are still missing James Harden, climb back in the game. It was Antetokounmpo’s career high in 3-point shots in a postseason game. 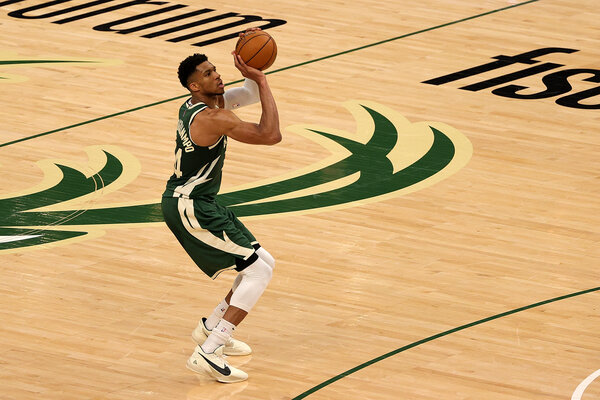 Asked about his shooting, Antetokounmpo seemed to be taken by surprise at first: “I took eight 3’s tonight?”

Antetokounmpo further defended his willingness to take jumpers by saying that his instinct told him to do so and that basketball is a game based on instinct.

It is also possible that Antetokounmpo strayed to the perimeter to avoid the risk of initiating contact under the basket and getting fouled.

He was only 4 for 9 from the free throw line, and also had a rarely called 10-second violation.

One offensive liability the Nets have — a rare one — is that they are predominantly a jump shooting team. They’re based on finesse, rather than on attacking the basket in the way Antetokounmpo does. The Nets only went to the line eight times on Thursday, as opposed to the Bucks’ 19. Six of those free throws were shot by Durant, who missed many midrange shots he usually makes.

This means the same looks that fell for the Nets in the first two games didn’t fall on Thursday. That happens sometimes with jump shooting teams. There is a high amount of variance and at some point, usually a regression to the mean.

Joe Harris, one of the best 3-point shooters in the league, missed several wide open chances and finished 1 for 11 from the field. And if jump shots aren’t falling for the Nets, they have trouble scoring. (During the regular season, the Nets were second in the league in 3-point percentage at 39.2 percent. On Thursday night, they were 8 for 32 for 25 percent.)

Which means a slow, low-scoring slugfest could benefit Milwaukee in the long-term. But it’s unclear Antetokounmpo wants that.

“We could play better,” Antetokounmpo said. “We could play faster. We could play more together. We can move the ball better so we can get back to our scoring 110, 120 points like we usually do.”