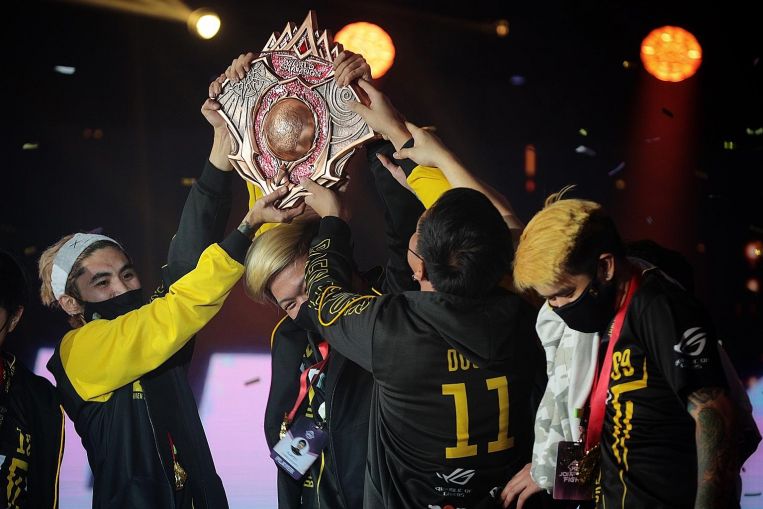 After an action-packed week at the Shangri-La Hotel, the Mobile Legends: Bang Bang (MLBB) M2 World Championship culminated last night in a thrilling grand final between eventual winners Bren Esports of the Philippines and Myanmar’s Burmese Ghouls, wrapping up one of the first major sports events that Singapore has staged this year amid the pandemic.

The Jan 18-24 event, which featured two local and 10 foreign teams, ran into an early hurdle just days before the start when three players from Brazilian team DreamMax tested positive for Covid-19.

But the US$300,000 (S$398,540) tournament went on smoothly behind closed doors with no other coronavirus cases and the Brazil team competed while isolating in their hotel rooms.

With the event deemed a success, the organisers and experts say that it proves that Singapore is able and ready to host major sports events during this Covid-19 era.

Lee Shu Ling, manager of Deloitte South-east Asia’s sports business group, said: “This event has definitely proven Singapore’s ability to host and organise such major events, even in the midst of a global pandemic with strict safe distancing restrictions and regulations.”

Singapore Cybersports and Online Gaming Association (Scoga) co-founder Nicholas Khoo said yesterday that the success of the world championship has erased doubts of Singapore’s ability to host major e-sports tournaments owing to factors such as cost and its small market size.

“As evidenced by the successful organisation of M2, Singapore is a trusted and safe place for world-class events,” he added.

Minister for Culture, Community and Youth Edwin Tong said in a Facebook post yesterday: “E-sports has a lot of potential for growth here, and we are in a good position to become a regional hub. In time to come, I am confident that we will build a thriving e-sports ecosystem, and nurture more Singaporean e-sports legends!”

The week-long tournament was co-organised by MLBB developer Moonton and Scoga, with the support of the Singapore Tourism Board.

Singapore has also previously hosted the 2017 world championship for mobile game Vainglory, which had a US$140,000 prize pool, while the US$500,000 One Esports Dota 2 Singapore World Pro Invitational was staged here in 2019.

As evidenced by the successful organisation of M2, Singapore is a trusted and safe place for world-class events.

Last week’s event could pave the way for more tournaments, with Moonton managing director Lucas Mao saying that Singapore “will definitely be high up in the list of potential host cities for our future world championships”.

Such events can only be a boon for the Republic, as Lee added that this would “solidify our position as an international sporting hub for the most popular and emerging sports, which in turn can boost tourism and the economy”.

She also pointed to factors that make Singapore an ideal destination for e-sports events, such as its location within Asia, which is the global hotspot for e-sports and one of the first to embrace e-sports in major Games such as the 2019 SEA Games in the Philippines and the 2022 Asian Games in Hangzhou, China.

Singapore also boasts some of the strongest infrastructure for technology in the world and has an IT-literate population, added Lee.

While noting that Singapore has a track record of hosting marquee sporting events, she noted that e-sports “is a whole different concept and it requires its own infrastructure for tournaments, streaming and facilities for the teams”.

Large amounts of bandwidth and a reliable network are needed to host a successful e-sports tournament to guarantee a good experience for players and spectators.

Khoo believes Singapore has shown that it is an ideal place to hold such tournaments, pointing to South Korean e-sports team T1 choosing to hold its Dota 2 boot camp here early last year.

Education in e-sports is also crucial in helping Singapore gain its foothold in the industry.

Lee said: “With heightened publicity and more e-sports viewership comes increased investment from sponsors, and more players and fans would translate to higher engagement and spending across the market, bringing the interest of e-sports game developers and franchises and setting the stage for Singapore as an e-sports tournament destination.”