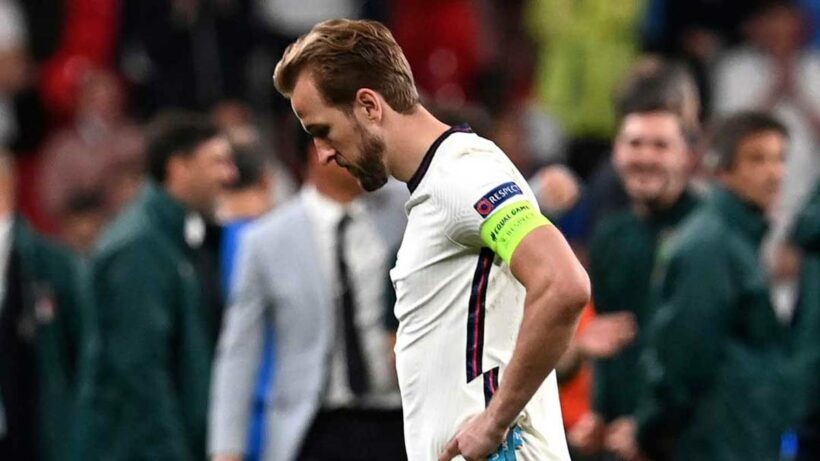 The hurt goes on.

That was the theme of British press coverage as England’s so-called homecoming party at the Euro 2020 football championships turned to disaster.

Italy’s win in the Wembley Stadium final raised old footballing demons for England, who have not won any major trophy since the 1966 World Cup and have a horror history in penalty shoot outs.

“It’s not coming home. Not yet,” wrote The Times, refusing to give up on the much-derided tournament theme that England is still the centre of the football universe.

The Times continued: “(England were) bedevilled by an old problem, by penalties, the scourge of (manager) Gareth Southgate’s life in the European Championships.

“It was brutal, as the years of hurt continue.”

“They were the better side tonight and proved themselves the best team of the entire tournament,” it reported.

Tracking the live Daily Mail headlines during the game showed how delight turned to torment.
‘England’s Dream Start’ greeted Luke Shaw’s early goal, but that turned into ‘Nerves are shattered at Wembley as resurgent Italy equalise…on a knife edge.”

As the game headed towards a spot kick tiebreaker, the headline read: ‘Please not penalties…fans fearing the agony of spot kicks.’

The question was then raised whether England’s young team could ‘overcome the country’s historic demons’.

And finally: ‘It all ends in tears…Italy extend 55 years of hurt’.

The Daily Mail went on: “Nerves were already shattered after the Italians ran England ragged in the second half, dealing them a hammer blow on the 67th minute through a scrappy goal from Leonardo Bonucci.

“Earlier Luke Shaw gave them a stunning lead within three minutes – the fastest goal ever in a European championship final – sending fans inside the stadium and millions across the nation wild.

“A jubilant Prince George threw his arms around his mother Kate as Prince William beamed from ear-to-ear.

“It comes after the party atmosphere descended into chaos just minutes before kick-off as dozens knocked down a barrier and rushed up the stairs to the stands as ticket-holding families with distraught children looked on.”