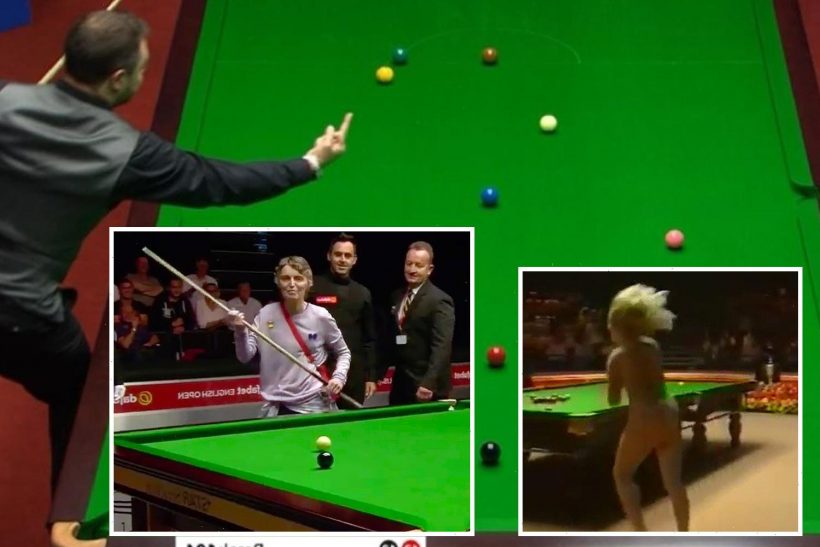 KURT MAFLIN'S middle-finger to the white ball was one of the highlights of a strange 2020 Betfred World Snooker Championships.

The Norway star was forced to apologise for flipping the bird to the cue ball as he missed out on a 147 attempt at the Crucible. 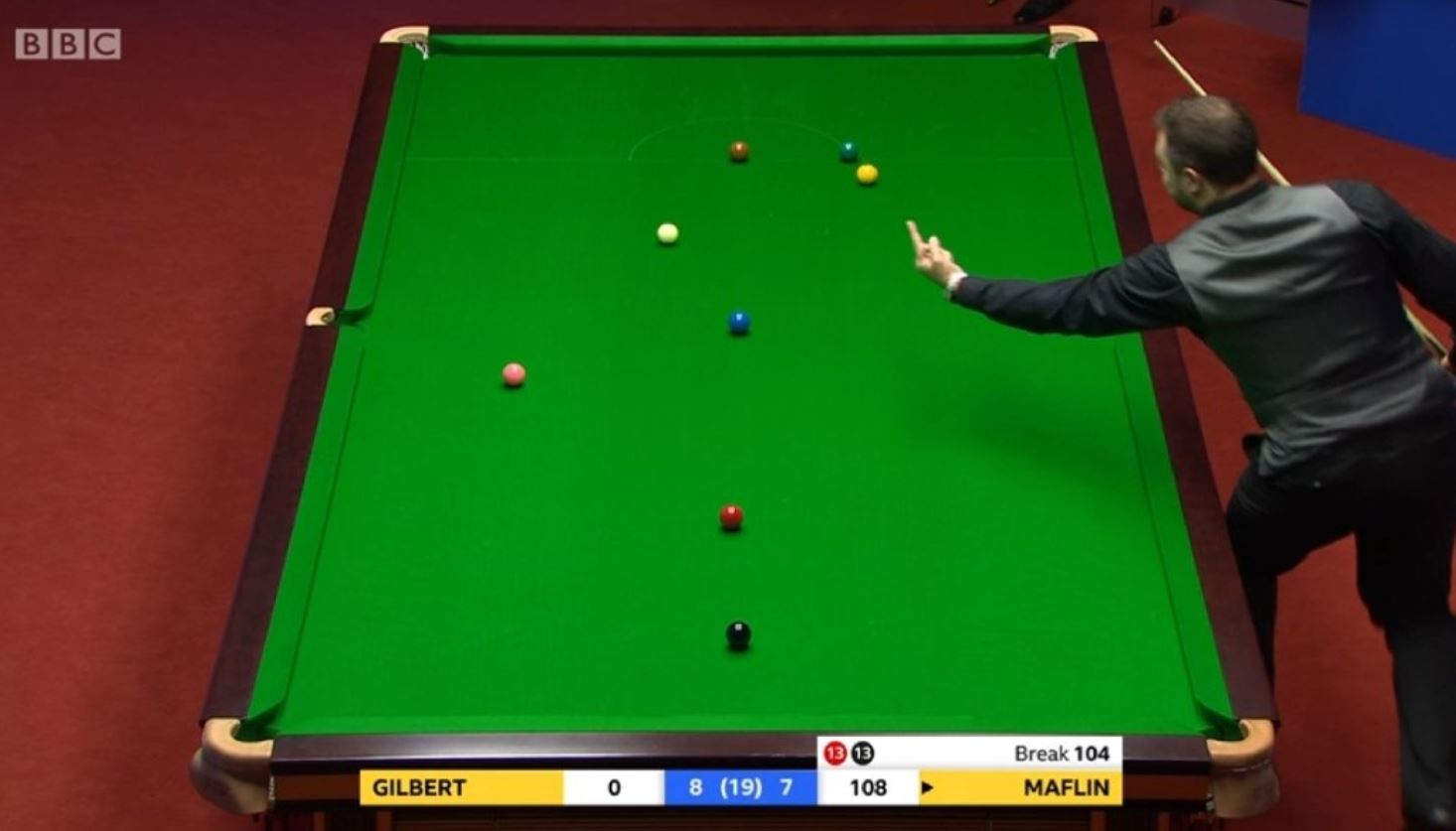 But snooker has a long history of crazy and wacky moments.

And SunSport have compiled the best for your pleasure. 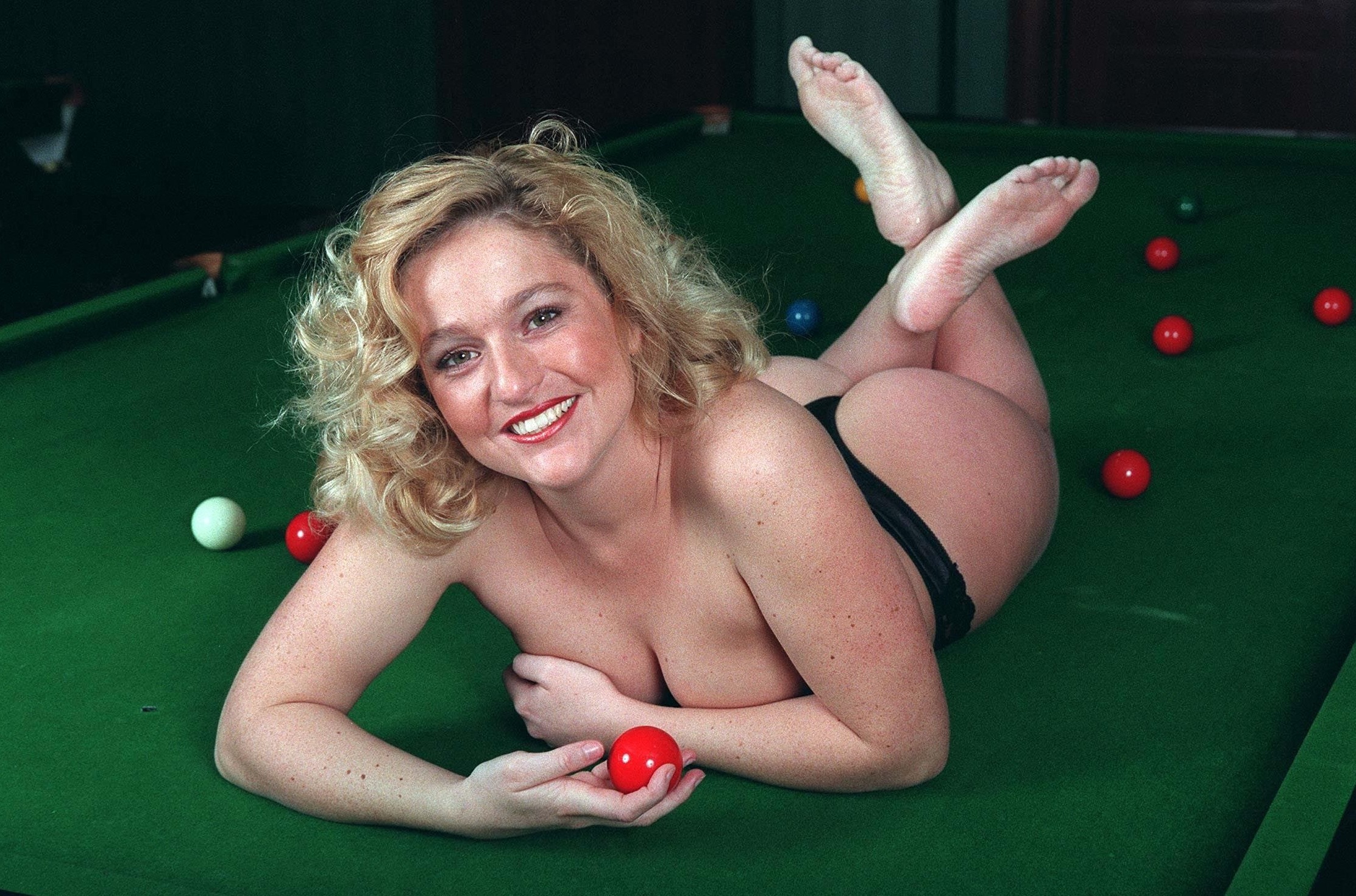 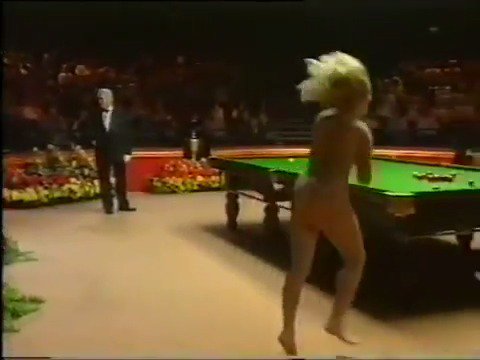 Fans getting naked at the snooker is nothing new and there have been various occasions when it has happened live on TV.

The first time it occurred, and perhaps the most famous occasion, was the 1997 Masters final between Steve Davis and Ronnie O’Sullivan.

A 22-year-old secretary Lianne Crofts gave everyone watching an eyeful when she invaded the playing area at the beginning of the third frame.

As stewards removed her from the arena, O’Sullivan amused the Wembley crowd by comically wiping the brow of veteran ref John Street, who was overseeing the final match of his career.

O’Sullivan laughed: “It was quite bizarre, I was sitting opposite her and saw her taking her clothes and thinking what she’s doing there?

“Then she ran down and did a couple laps of the table. I think she was waiting for someone to come and grab her, but no one would.

"So I think she felt a bit silly. But it was very funny.”

In 2020, the Masters final at Alexandra Palace was brought to a halt today by a mystery raspberry-blower.

Ali Carter and Stuart Bingham were going head-to-head for one of the sport’s most prestigious titles and a £250,000 prize in North London.

But midway through the fifth frame play began to be disrupted by noises many thought to be from a whoopee cushion.

Carter was first to be disturbed while he was at the table – and when Bingham came to play his next shot, the mystery assailant struck again.

With the audience starting to laugh, the players and referee Brendan Moore were not amused and security were sent to inspect the area from which the noises were coming.

However on further inspection, a small joke device was discovered under a seat, believed to have been placed there by a fan sitting elsewhere in the sold-out arena.

This meant that the device was being operated remotely, with the perpetrator remaining at large after its discovery.

The laughter had begun in ripples, but before long much of the arena were in hysterics. 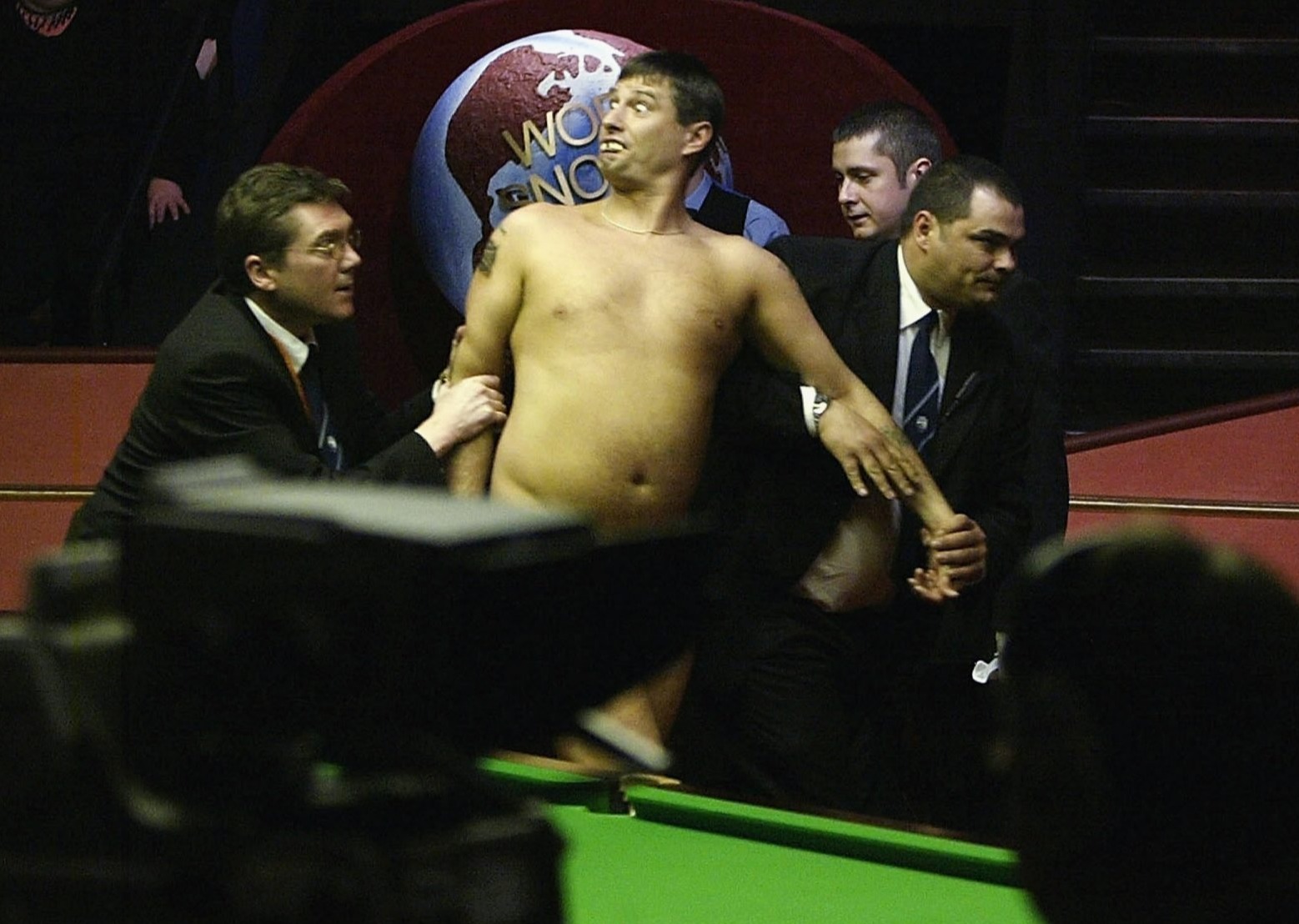 It can be cold in Sheffield in the spring but that did not stop serial streaker Mark Roberts from Liverpool from baring all.

In 2004, he had stripped off at the Super Bowl in Houston, a Barcelona vs Real Madrid match and Royal Ascot.

And he even managed to show off his own balls before the final session of the 2004 Embassy world final when O’Sullivan beat 200-1 outsider Graeme Dott 18-8 for his second trophy.

Sporting a pair of joke teeth and nothing else, the naked Scouser danced around the Crucible theatre in front of millions on TV before being escorted away by security.

He was let go by South Yorkshire Police and claimed his only aim was to get under the table to claim “psychological asylum, a helicopter out and the results of my 11-plus exam” 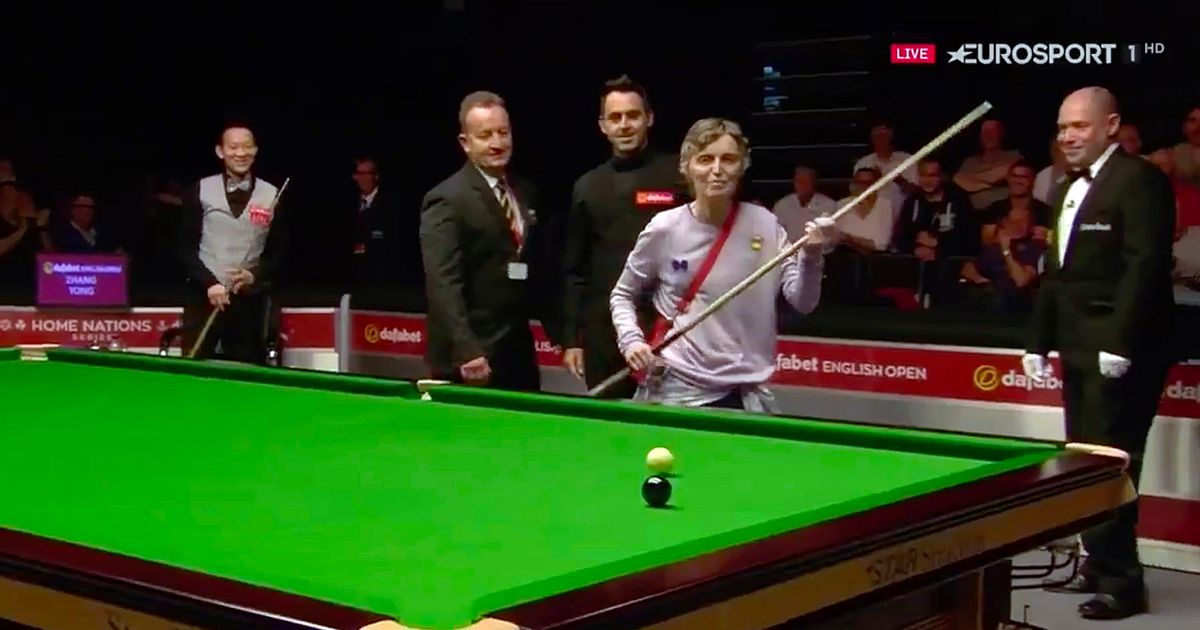 O’Sullivan doesn’t let many people use his equipment but that all changed at the 2017 English Open in Barnsley.

In the latter stages of a match-winning century against Zhang Yong, O’Sullivan was all set to pot the pink and then black.

Yet his flow was interrupted by the presence of an energetic yet clearly deranged middle-aged woman, who had evaded security and the match referee and then started jogging round the table.

Ever the gentleman, O’Sullivan offered his cue and let her attempt to pot the black ball, to which she cheekily asked: “Do I get money if it goes in?”

Though it all ended safely and there was plenty of humour involved, it did raise serious questions about what harm she could have done to the players. 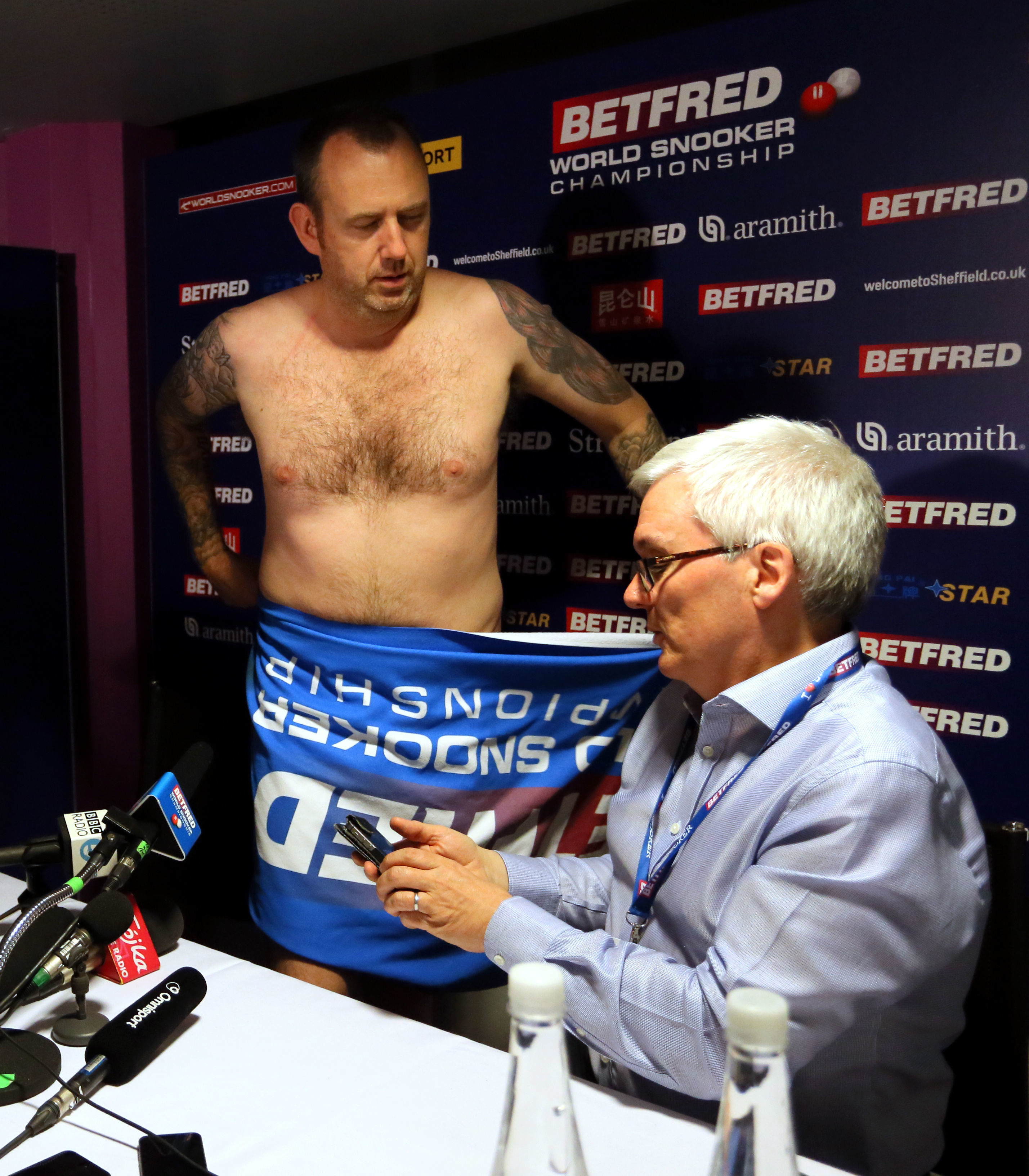 Nobody expected Mark Williams to win a world title at the age of 43. Neither did he.

Before the tournament, he did not rate his chances whatsoever and said he would strip off naked if he became a three-time world snooker champion.

Well the Welshman overcame the odds and beat John Higgins 18-16 in the final, becoming the sport’s second oldest world champ.

And he was true to his word.

With a Betfred towel protecting his modesty, he walked into the press conference with all his tattoos showing.

Fair play, Wilo. But best not to make promises next time. 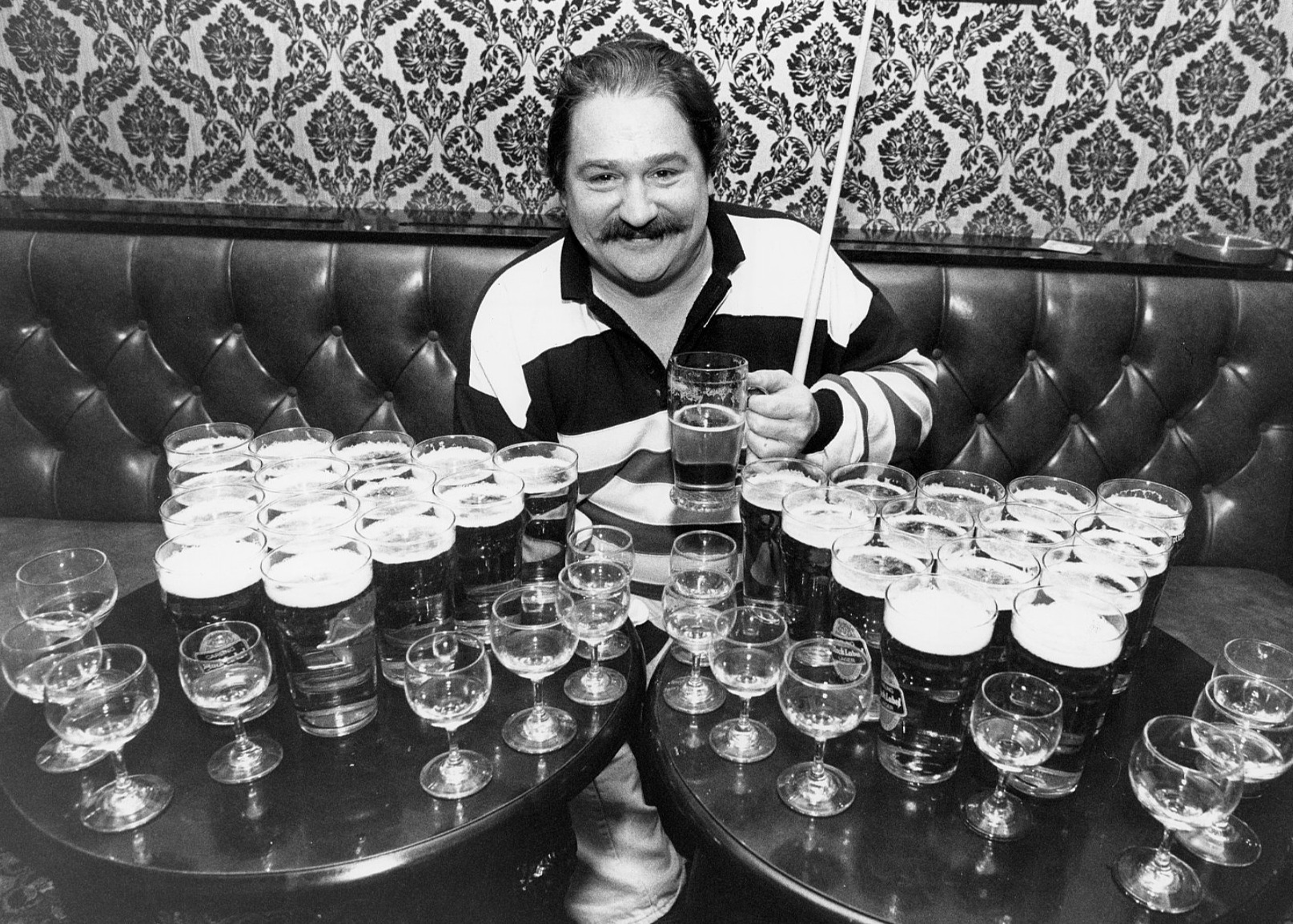 In a sport of heavy drinkers, Canadian hellraiser Bill Werbeniuk was the undisputed King.

Legend has it that in January 1990, the Canadian downed 28 PINTS of lager and 16 whiskies as he lost 10-1 to Nigel Bond in qualifying for the 1990 world championship.

Once the match was over, he drowned his sorrows at home with a bottle of scotch.

The 20-stone star claimed he suffered from a hereditary nervous disorder which caused his hands to shake.

He argued that drink was the best solution to calm himself down.

After acquiring a medical certificate for his beer-consumption, he once tried to claim his drink expenses against tax! It didn't work.

In retirement, Werbeniuk suffered bankruptcy and lived off disability benefits.