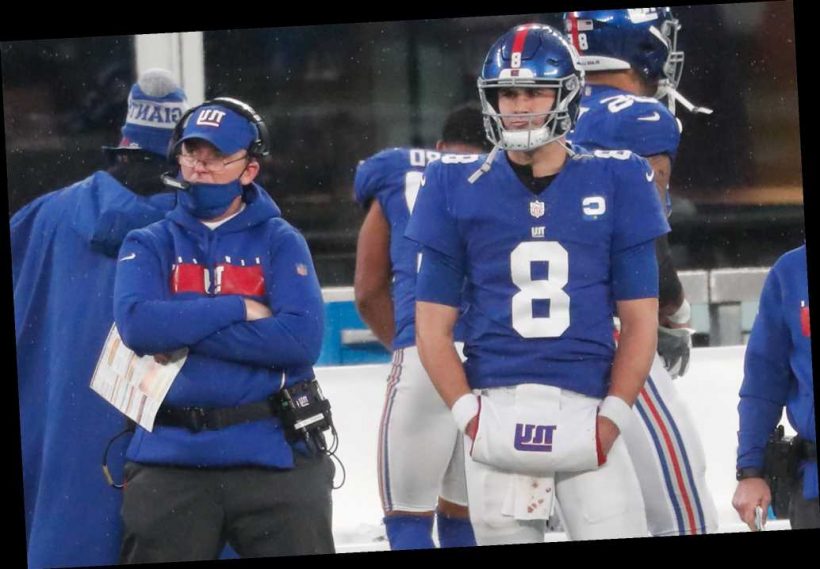 Giants get apology for play that nearly cost them

Eagles doing everything they can to endanger Giants’ playoff hopes

Long-time Giants delivered when needed most

As strange and unusual as this season was, it ultimately was not so strange and so unusual that it included the Giants becoming the team with the worst record to ever qualify for the playoffs.

All the Giants could do Sunday afternoon was all they could do, which was finding a way to win their final regular-season game and then hope for the best. They did their part, beating the rival Cowboys 23-19 at rainy MetLife Stadium. As they left the field, the Giants did not know if the victory was a fond goodbye or a springboard.

“However it shakes out, I’m proud of this team,’’ receiver Sterling Shepard, the longest-tenured Giants player, said.

It did not shake out the way the Giants needed it to, as later in the evening, Washington defeated the Eagles 20-14, securing the NFC East title for Washington (7-9) and leaving the Giants (6-10) in second place, the first season for head coach Joe Judge over and done with.

Leaving the job to others is always risky business, and so it was for the Giants. The three-game losing streak in December cost them control of their playoff destiny, and that turned out to be their undoing.

Giants players watched with great interest and then intense horror as Eagles head coach Doug Pederson, trailing 17-14 early in the fourth quarter, pulled quarterback Jalen Hurts for seldom-used Nate Sudfeld, a move that showed how uninterested Pederson was in actually winning the game.

“This is sickening,’’ receiver Darius Slayton posted on Twitter.

The Eagles owed the Giants nothing, but you can be sure Judge and the Giants will remember how Pederson navigated his way into a loss and cost them a shot at the playoffs.

If Washington had lost, the Giants would have become the first team in NFL history to go 6-10 and make it to the postseason. Instead, Washington plays host to the Buccaneers (11-5) in an NFC wild-card game and the Giants pack up and go home, missing out on the playoffs for the fourth consecutive year.

Judge, after the Giants won, said he was headed back to his office to begin preparing for the Bucs. Whatever he and his staff got done will not be needed.

“My words for the team at the end of the day was how proud I was that they kept playing,’’ Judge said before knowing his playoff fate. “We came in, it was a meaningful game, put us in position to have a chance, our guys went out and took care of business.’’

To stay alive, the Giants went ahead 13-3 and 20-6. They nearly unraveled and early in the fourth quarter they were clinging to a 20-19 lead and every scintilla of momentum was with the Cowboys. At the finish, the Giants got a monstrously big end-zone interception from rookie Xavier McKinney with 1:15 remaining and exulted over a Wayne Gallman run for a first down to clinch the game, until Gallman actually dropped the ball. He fell on it for the recovery and only after a scrum of bodies and an official replay confirmed this, the Giants could exhale.

So, when the Giants showered and took leave of the stadium, they did not know if the next time they assembled would be to clean out their lockers or to begin preparation for a playoff game at MetLife Stadium. The Giants, for one night, were Eagles fans.

“I won’t be caught dead in an Eagles hat, but I will be rooting for ’em,’’ Shepard said.

To stay alive, the Giants had to survive. They dropped would-be interceptions by Julian Love and James Bradberry and had what was an interception by McKinney nullified by a penalty on Darnay Holmes. Daniel Jones tossed first-half touchdown passes to Shepard and Dante Pettis, and Shepard started the scoring with a 23-yard touchdown run on a reverse.

The second half was a slog, as the rain started to pick up. Jones early in the third quarter was intercepted by safety Donovan Wilson on a pass that went through and deflected off the hands of tight end Evan Engram. The Cowboys cashed in with an Ezekiel Elliott touchdown and the Giants lead was trimmed to 20-16. A Greg Zuerlein field goal made it 20-19 early in the fourth quarter.

Jones and Shepard got cooking, and a 50-yard field goal by Graham Gano pushed the Giants lead to 23-19 with 6:27 remaining. The Cowboys marched from their 25-yard line to the Giants’ 6-yard line. Leonard Williams’ sack of Andy Dalton made it third-and-goal on the 17-yard line and McKinney came up with his first NFL interception when Williams pressured Dalton into a desperate throw.

“I feel like we’re the best team in the division,’’ safety Logan Ryan said. “We definitely deserve to represent the NFC East.’’

That will not happen. It is wait until next year for the Giants.