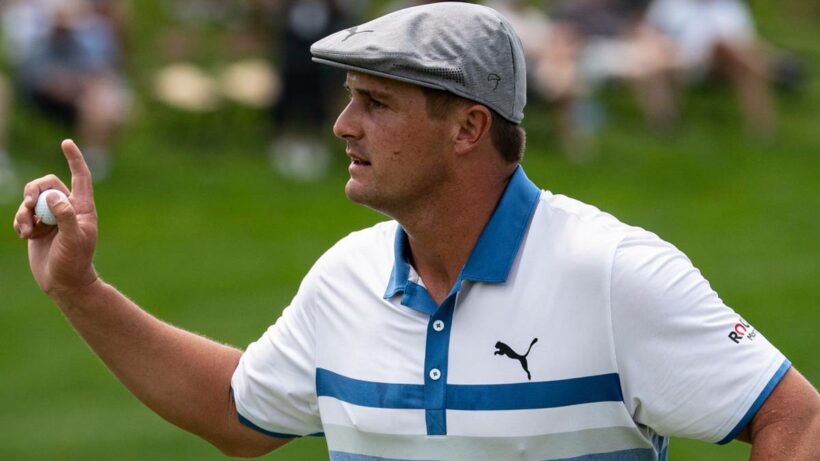 You knew Bryson DeChambeau had some devilish sorcery planned when he lined up his body at a 45-degree angle from where the markers on the fifth tee were pointing.

A couple of seconds later, golf’s destructive genius was launching perhaps the most blistering Exocet of his career, a 381-metre drive that left him just a short pitch into Whistling Straits’ second-longest par-five. Even for a man who has made the ridiculous look routine, it was a flourish of stunning audacity.

As a measure of the shot’s rarity, DeChambeau was 185 metres further up the fairway than fourballs partner Scottie Scheffler, himself one of the longer hitters on the PGA Tour.

This extraordinary disparity owed much to the aerial route he had chosen across the lake, more treacherous than anyone else would dare attempt. But it also reflected his ferocious power.

The 27-year-old is in training for next month’s long driving world championship in Nevada, a title that on this evidence he is sure to collect.

While DeChambeau’s physique invites caricatures of Popeye-esque absurdity, his bulking-up has not been without purpose. As he illustrated here, he has developed the distance to pound courses such as this into submission. Yes, the Wisconsin crowds went wild, but his mighty heave was not just some extravagant party trick.

By shortening the hole so dramatically, he could stick his second shot within a foot of the flag, walking off with an eagle and a vital advantage in the US pair’s duel with Jon Rahm and Tyrrell Hatton.

DeChambeau has conjured similar feats before, not least when carving up Bay Hill’s iconic sixth hole earlier this year, with a 366-metre drive that sent the Florida fans into raptures. But this was prodigious even by his standards.

The ball had flown so far, into a place normally intended as a lay-up area for second shots, that the cameras initially had trouble finding it. When finally spectators understood what he had done, the sound was one of incredulous laughter.

Sky Sports television commentators could be heard remarking on just how remarkable DeChambeau’s tee shot was and seemed to be in a state of disbelief.

“That’s not real. That is unbelievable, what a drive from Bryson.”

However, it wasn’t all smooth sailing for DeChambeau as his first drive of the afternoon sailed into the crowd lining the edge of the opening hole, leaving a woman with an injured foot.

“I didn’t see it coming,” the woman told the LA Times. “Came down right on top of my foot.”

Perched just above a bunker to the far left of the fairway, the woman said she felt fine but that the ball was coming in hot, so it likely would have been buried deep in the tall grass had it not struck her.

“He signed a golf ball and gave it to me,” she said. “He was very nice. Apologised and shook my hand.”

Earlier, the US took a 3-1 lead after the first morning’s play. After dropping their first match of the day, they then took the next three to open an early lead after the foursome matches.