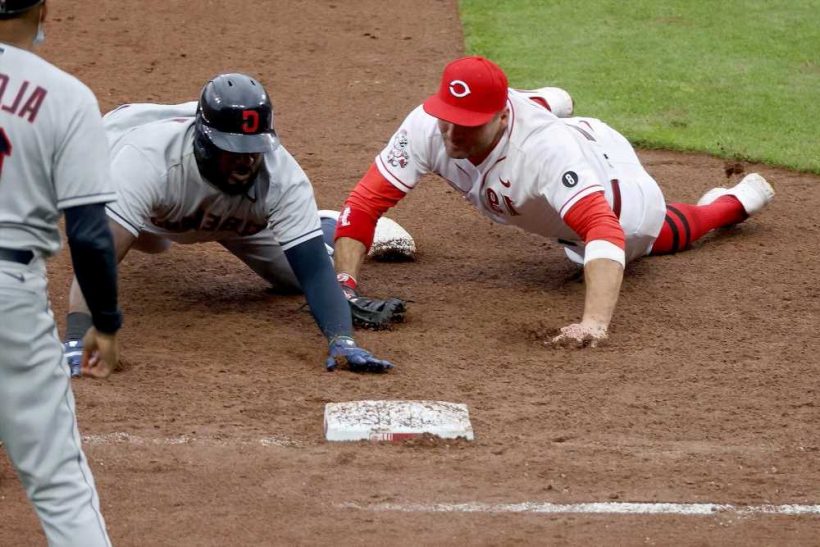 Former Mets starter twirls another gem to improve to 3-0

Yankees’ solution for turnaround is what they used to live by

Joey Votto pulled off the Reds’ first triple play Saturday since they did so against the Yankees in 2017.

With runners on the corners and Cincinnati trailing by a run in the eighth inning against Cleveland, the star first baseman snared Josh Naylor’s line drive and made a diving tag of runner Franmil Reyes attempting to get back to the bag.

Votto then got up and appeared to ask if the runner at third, Eddie Rosario, had tagged up before running home. He threw to third baseman Max Schrock and umpire Chris Conroy signaled for the third out of the play.

“Of course, a huge swing in that game,” Reds manager David Bell said after his team came back to post a 3-2 win in 10 innings. “Hard-hit play by Joey. We got a break there. We got the break, and we made the most of it and then came back and won. But it could have definitely been a different game if they scored a run or two there.”

Votto’s defensive gem marked the 31st triple play in franchise history and the first since one against Todd Frazier of the Yankees on July 25, 2017.

Schrock admitted he wasn’t certain if Votto had caught the ball in the air, and he actually was yelling for him to throw the ball home to try to nail Rosario at the plate.

“I was screaming, ‘Four!’ I was screaming to throw home,’ Schrock said. “I’m glad he didn’t do that because it was a lot easier for him to flip it over to me at third, it ended up being. It’s cool to be a part of that.”