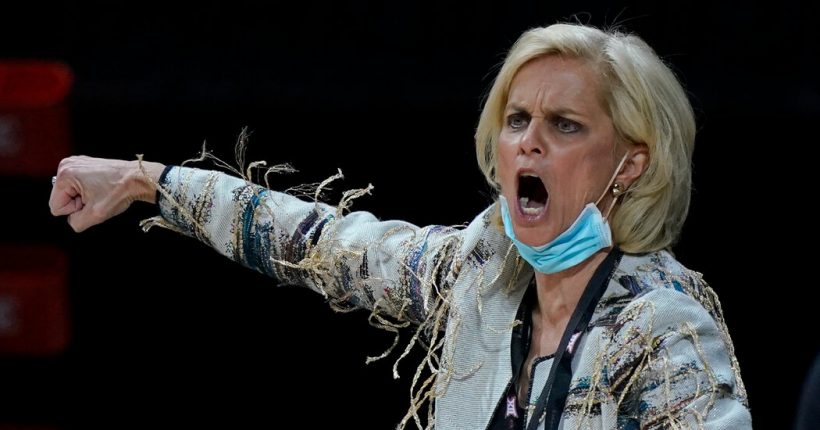 Louisiana State scored a major women’s basketball coup on Sunday when it hired Kim Mulkey, who won three national championships in 21 years at Baylor, as its new coach.

Mulkey’s move is perhaps the most significant coaching change in women’s college basketball in recent years, and sends one of the country’s top coaches to one of the nation’s deepest leagues, the Southeastern Conference. The fiercely competitive SEC, long a standard-bearer in women’s basketball, sent seven teams to last season’s N.C.A.A. tournament and one, South Carolina, to the Final Four.

The national champion and Hall of Famer has been named the head coach of the Fighting Tigers!

Mulkey, 58, is returning to her roots. She grew up in Louisiana, where she was a four-time state champion at Hammond High School and won two national championships as a player at Louisiana Tech. She began her college coaching career at her alma mater, and then went 632-104 at Baylor.

“Kim Mulkey is a champion and a Hall of Famer, and we are thrilled to welcome her home,” said Scott Woodward, the L.S.U. athletic director. She will be introduced as the Tigers’ coach at a news conference on Monday.

Mulkey’s playing achievements — which include an Olympic gold medal in 1984 — were followed by an equally sterling coaching record. After serving as an assistant at Louisiana Tech, she became the head coach at Baylor in 2000. The team was coming off a 7-20 season and had never made the N.C.A.A. tournament.

She led the Bears to national titles in 2005, 2012 and 2019. Mulkey’s teams made one other Final Four, and 10 additional trips to the round of 16. Baylor made the N.C.A.A. tournament every year but one during her tenure.

“She reminded me a lot of my dad — strict and fair,” Griner said at the time of Mulkey’s coaching style. “There are no favorites. There is no sugarcoating. She tells you how it is and doesn’t hide anything.”

The only woman to win an N.C.A.A. basketball championship as a player, as an assistant and as a head coach, Mulkey was inducted into the Basketball Hall of Fame in 2020.

“We are grateful for the more than two decades Kim Mulkey poured into building Baylor women’s basketball to one of the nation’s premier programs,” Baylor’s athletic director, Mack B. Rhoades IV, said.

In 2019, Mulkey brought her championship team to the White House, the first women’s team honored in its own right by President Trump.

“Would you like to work at the White House, by any chance?” Trump asked her. “No,” Mulkey replied. “We’ll take you,” Mr. Trump said. “We need the help.”

Mulkey’s success had earned her a $2.27 million a year contract at Baylor, and L.S.U. was reported to be exceeding that figure to lure her away. The L.S.U. men’s coach, Will Wade, makes $2.5 million.

Mulkey again comes to a team in need of a turnaround. L.S.U. made five consecutive Final Fours from 2004-08, but it has not returned since. In eight seasons under Nikki Fargas, the team made two appearances in the round of 16. In 2020-21, it was 9-13. Fargas resigned on Saturday.