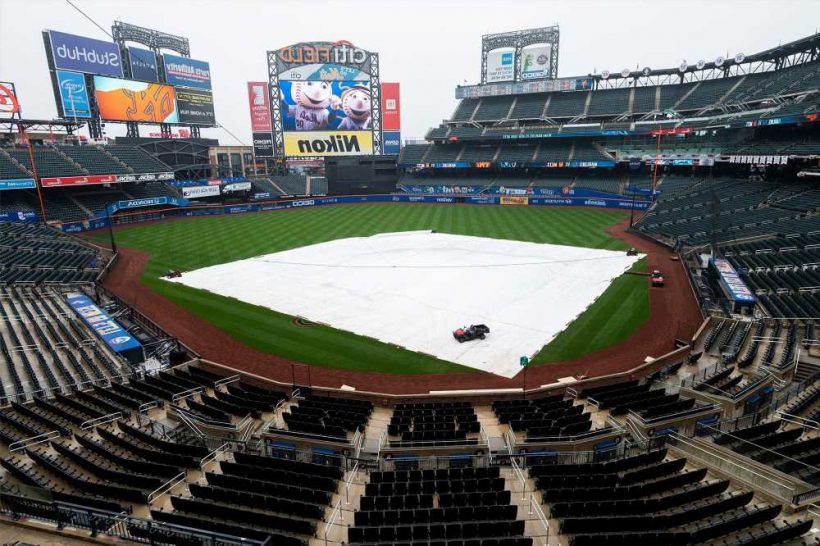 Imperfect replay system is still better than none at all

Mets, Michael Conforto aren't about to return this gift

What makes this Knicks downer so tough to swallow

This Mets start hasn't been pretty

A brief history of rain-and-sports quotes:

Carl Spackler, 1980: “I’d keep playing. I don’t think the heavy stuff’s going to come down for quite a while.”

Luis Rojas, 2021: “We had an exclusive forecast expert. He said it was going to be lighter rain or a mist-like rain.”

(NOTE TO METS: Get a forecast expert with more expertise.)

Yes, only the Mets could make something as annually routine as the April shower and turn it into a 2-hour and 10-minute soap opera. That’s how long it took everyone in charge at Citi Field on Sunday to wait out the rain, which refused to be waited out. To anyone with a weather app on their phone, this was the least-surprising news of the day.

“I’m on my phone all the time,” Rojas said, and so is anyone else who has a vested interest in whether the weather will allow early-season baseball games to be played. There are a number of these apps available, and on Sunday every one of them had essentially the same forecast.

No, seriously: All day, a lot. I saw that. Rojas saw that. Most of the fans who chose to stay away from Citi Field on Sunday — and a hearty cheer to those of you who came, anyway — could see that. Of course, we’re not forecast experts …

There are certain threads of common sense that really need to be applied to springtime baseball and the dark clouds that sometimes interrupt the fun.

When the Mets and Marlins took the field Sunday, the pitcher’s mound, batter’s box and basepaths were already glistening. This was “light rain” only compared to the sideways rain Forrest Gump encountered in Vietnam. The second batter of the game, Starlin Marte, hit a lazy bloop to right that Michael Conforto had to slosh through to corral.

And Marcus Stroman, the Mets’ pitcher, didn’t look at all comfortable, walking around between pitches, throwing balls out of play. We learned later just how uncomfortable he was when he tweeted:

“This game should have never been started. Not smart at all. Those conditions put everyone at risk. Beyond happy no players on either side were injured. Hate that I have to wait another 5 days to pitch again. That’s a miserable feeling. However, #LFGM each and every day! @Mets”

Now, you may be of the old school that players should keep their opinion about things that don’t pertain directly to them to themselves. But Stroman does seem to be the only person willing to believe his eyes over a forecast expert. What he said was correct.

So Stroman got ready to pitch, and then he watched the sky open up, and nobody was telling the Mets or the Marlins it was time to go home. It’s supposed to be too early in the year for the silly season to start.