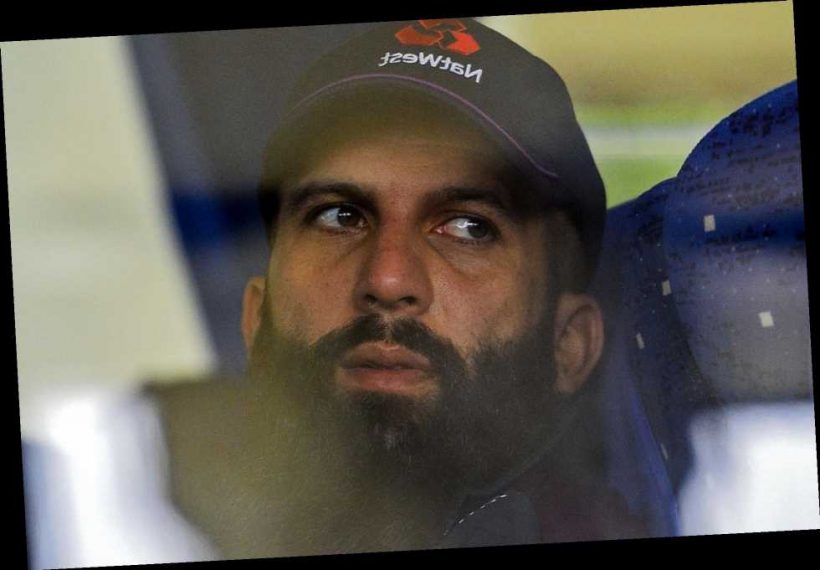 MOEEN ALI has completed an extreme piece of social-distancing – he is now 75 miles away from his team-mates.

All-rounder Moeen, who tested positive for Covid-19 on Monday, departed England’s training base yesterday and was driven to a special safe house. 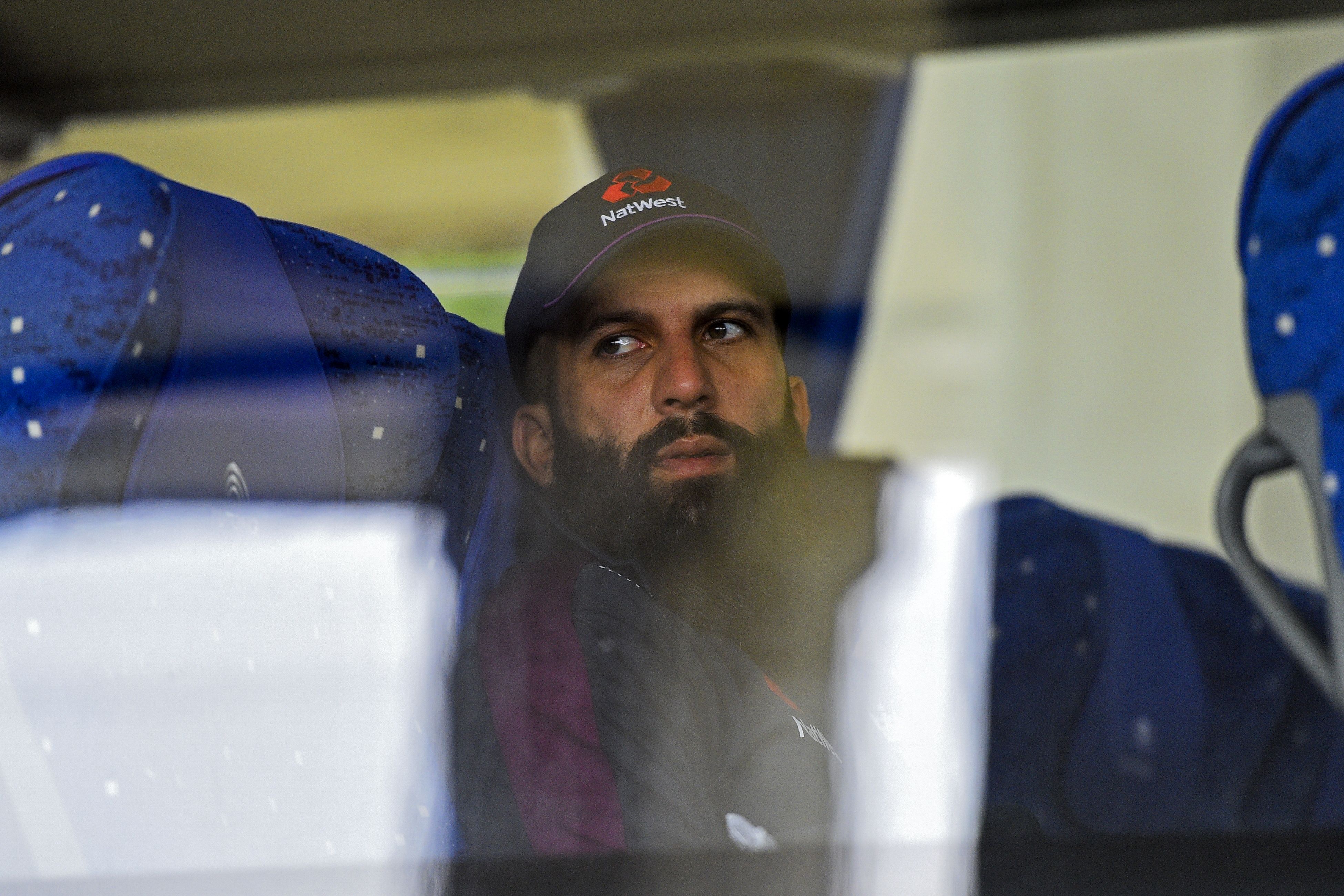 The rest of England’s players and management are keeping their fingers crossed that their latest Covid-19 tests – conducted on Tuesday – are negative, with the results due on Wednesday.

If they are all negative, England hope to be given the green light to begin training in small groups the same day.

Moeen is in a hotel in Galle – venue for the First Test against Sri Lanka on January 14 – which was reserved and kept empty as a bolthole in case any England squad member tested positive.

He was accompanied from Hambantota by Professor Nick Peirce, the ECB’s chief medical officer, who is with the team in Sri Lanka.

Peirce travelled in a separate vehicle but was allowed to join Moeen because he has already received an anti-Covid vaccine in the UK.

His job was to check the facilities, hygiene and Covid protocols at the hotel – which had not previously been viewed by ECB officials.

Because of the pandemic, they had seen only pictures and videos.

The rest of the England squad will arrive at another, bigger hotel in Galle on Saturday evening. 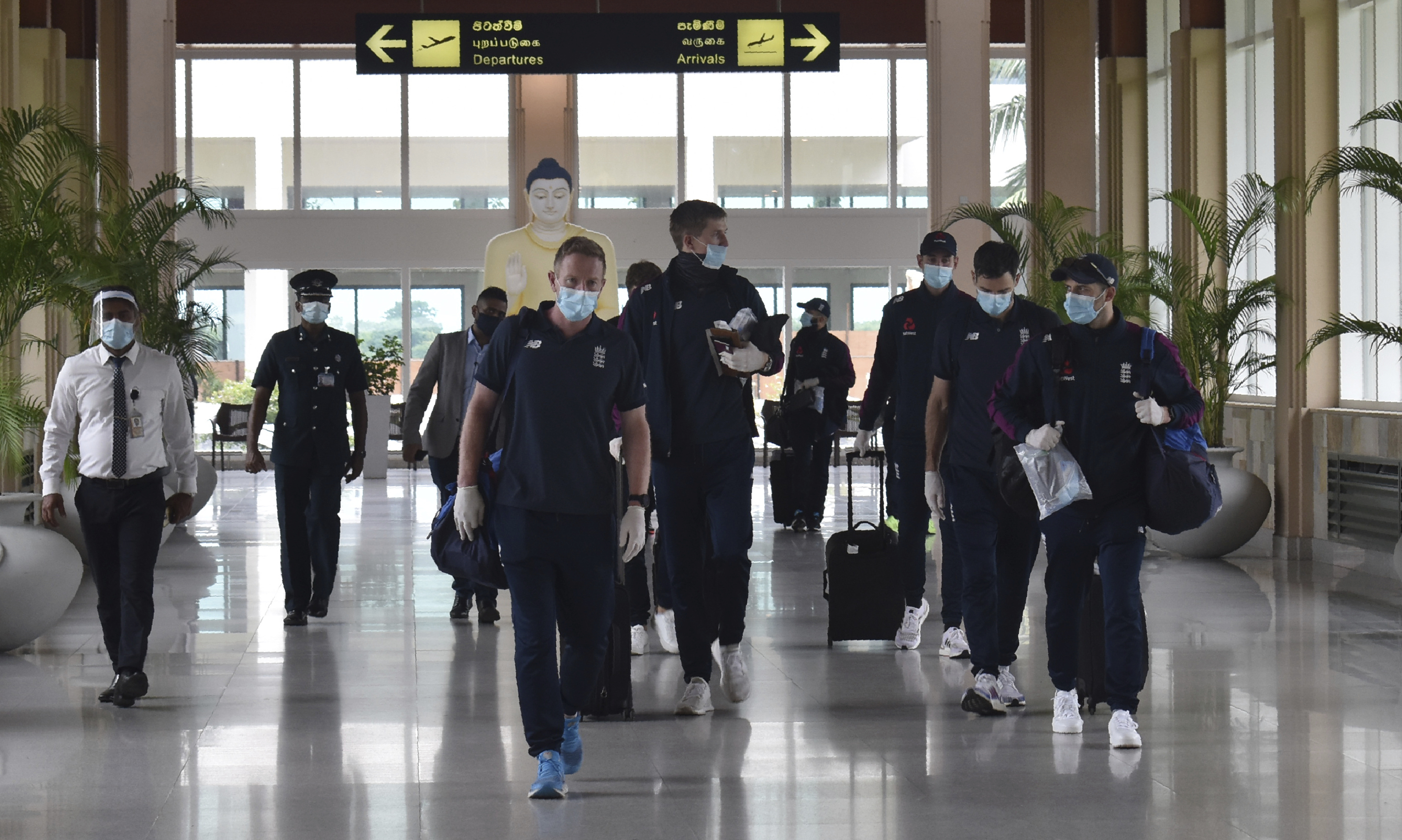 Moeen was said to be reasonably relaxed about his positive test but frustrated that his ten-day isolation period will not end until January 13 – almost certainly ruling him out the First Test.

Chris Woakes, who must isolate for seven days after sharing a chauffeur-driven car with Moeen to Heathrow airport on Saturday, has remained with the team in Hambantota.

Joe Root and his England players are experiencing by far their strictest lockdown protocols since the start of the Covid-19 pandemic.

The ECB are under huge pressure to complete the two Tests against Sri Lanka before heading to India for four Tests, five Twenty20 and three one-day internationals.

England have aborted their last two overseas missions – to Sri Lanka in March and South Africa in December.

It is a big contrast to West Indies, Pakistan, Ireland and Australia staying the distance and fulfilling every fixture last summer.

Moeen's positive test on arrival in Sri Lanka on Sunday was a blow to England because it sent anxiety through the squad and cast an early doubt on the future of the tour.

Here, SunSport gives a breakdown of the measures in place to try to make sure nobody else catches Covid-19.

England’s players and backroom staff have been stuck in their rooms since arriving at their luxury golf and hotel resort in the coastal town of Hambantota on Sunday.

They were disinfected by a 12-strong squad of hazmat-wearing staff as soon as they disembarked their BA charter.

All luggage, hands and footwear was sprayed.

Once in the terminal, they were given lateral flow and the more accurate PCR tests.

This meant two swabs up the nose and down the throat. This is when Moeen tested positive.

They travelled on two buses to the hotel. Masks were worn throughout and they kept apart as they waited to be assigned rooms.

No other guests are staying at the resort. 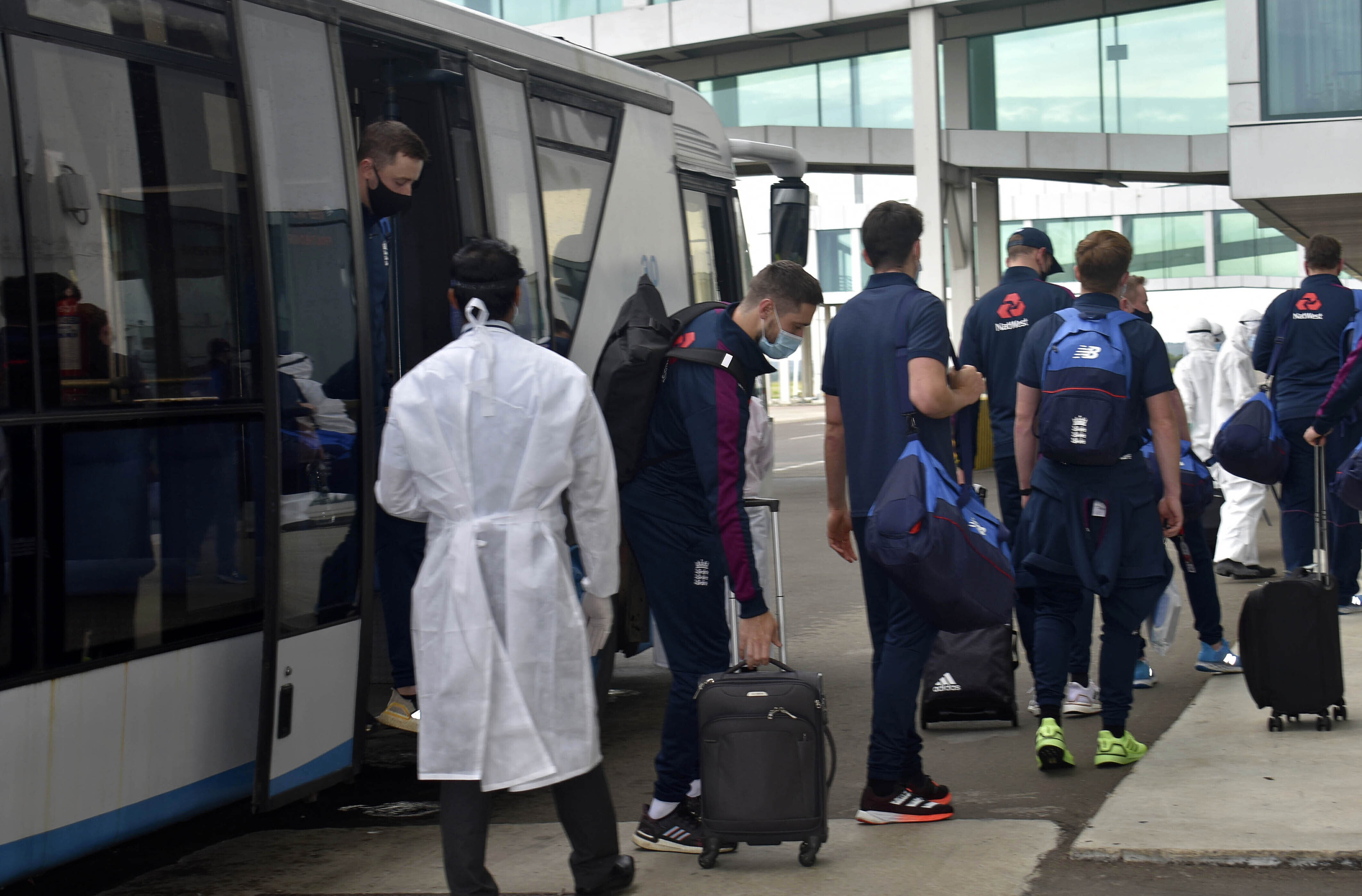 Breakfast, lunch and dinner is ordered via the room phone. Vegetarian options are available.

They arrived in takeaway cartons on a trolley with a knock at the door.

Empty cartons are put back on the trolley and left outside for collection.

Anything delivered to rooms is brought by somebody wearing a white hazmat suit.

The rooms are well-appointed but space is restricted.

Players can do yoga, skipping and other exercises.

Each has been given an app with a variety of body-weight routines prepared by an ECB strength and conditioning coach.

Players keep themselves amused by playing games – Call of Duty is a perennial favourite – watching Netflix or keeping up with various cricket matches around the world, most of which are on TV.

Some have even been known to read books.

They can communicate via Zoom or Whatsapp.

The rooms have balconies – either overlooking the beach or the golf course – which allows fresh air, but there are partitions so it is not possible to see or talk to your neighbour.

Golf might be allowed on the hotel course after lockdown is lifted but time and opportunities will be limited.

The only time anybody has been permitted to leave their rooms was for another Covid test on Tuesday morning.

These were conducted in an outdoor dining area. One-by-one, each person was escorted down from their room and then straight back.

They didn’t see any other squad member. The results are due on Wednesday. 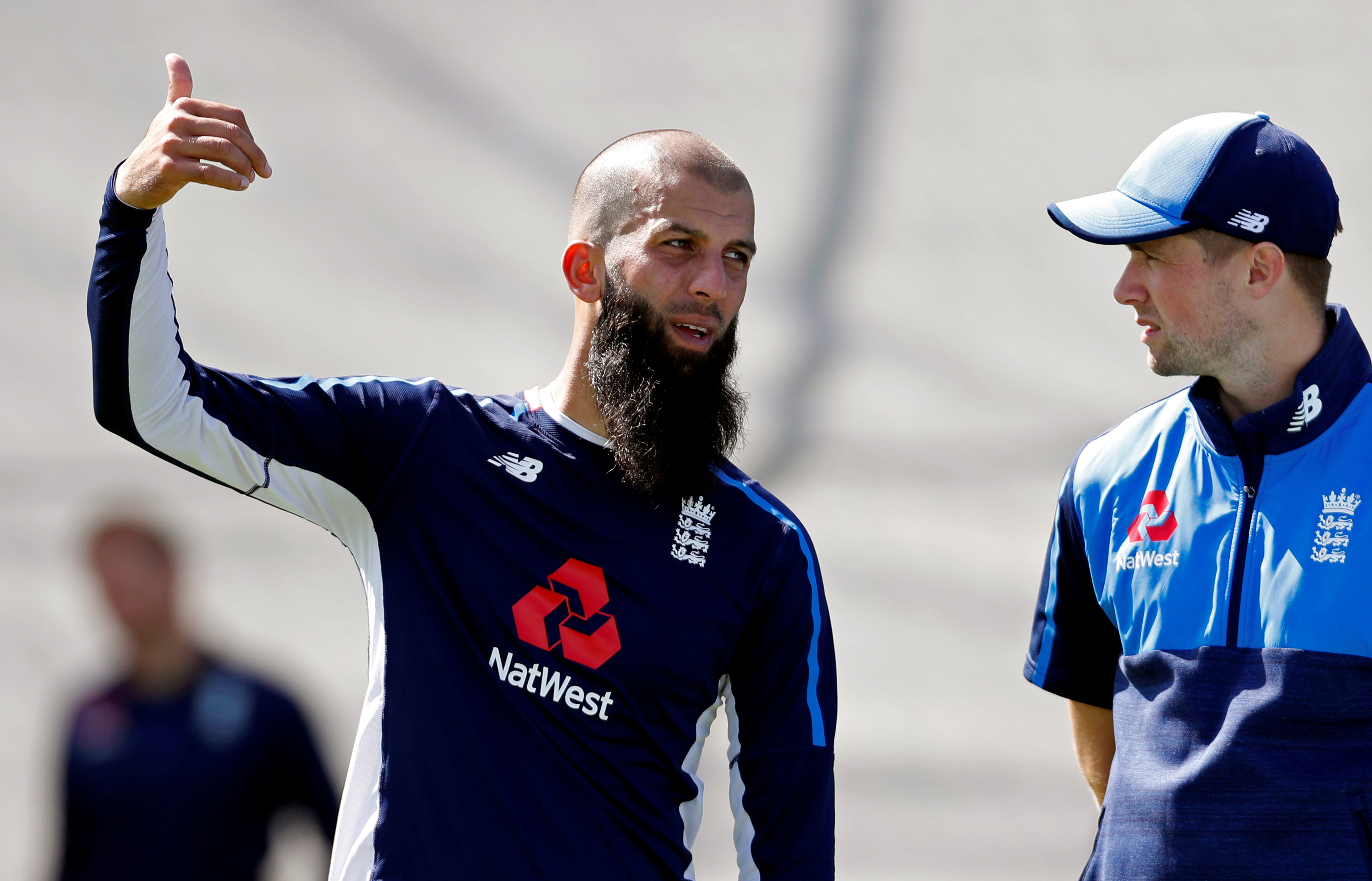 Every squad member has an ECB welfare app, which has to be completed and submitted to medical staff every day.

There are questions about how they are feeling and a thermometer is provided to take their temperature each morning.

England hope to begin training on Wednesday if their Covid tests are negative.

Initially, they will be in smaller groups building towards a two-day intra-squad practice match on Friday.

No nets bowlers from outside will be used.

The squad travels in two or three buses on Saturday evening to Galle.

Sunday is a rest day followed by three days of preparation for the First Test on January 14.

The buses are sprayed before use and the drivers are staying throughout in the team hotel as part of their bubble.

The squad trained last week at the ECB’s high performance centre in Loughborough, where grass nets are covered by a marquee.

It snowed one day – quite a contrast from the 100-degree temperatures common in Sri Lanka at this time of year.

Everybody was tested before being permitted entry to Loughborough and again at their homes last Thursday, two days before flying to Sri Lanka.

They were driven to Heathrow airport on Saturday.

As they had both tested negative on Thursday, Moeen and Chris Woakes shared a car, which is now regarded as a mistake.

The squad had business class seats on the BA charter and were socially-distanced.

ECB medics told the players that, like with all modern aircrafts, filters in the air-conditioning system would suck up and kill anything Covid-related.