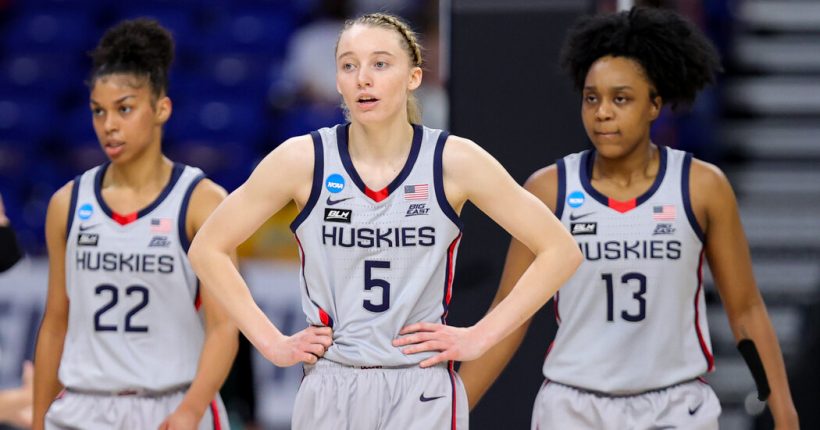 The 2021 women’s basketball Final Four has all the narratives a fan could want.

The dynastic Connecticut program looks to reclaim its spot at the top. The historically great Stanford program aims to recapture its former glory. South Carolina, the recently built program, is establishing itself as a perennial contender. And Arizona, the first-timers, work to make their mark.

If you missed the Elite Eight games and even if you didn’t, here’s a primer on what to look forward to as the nation’s top teams head to the national semifinals, with UConn facing Arizona and Stanford playing South Carolina.

Connecticut is ready to reassert its trademark dominance.

It is probably a surprise to no one that Connecticut is in the Final Four. But predictably or not, for the 13th consecutive year, Coach Geno Auriemma and the Huskies are competing in the national semifinals after eking out an Elite Eight win over Baylor. The Bears had led Connecticut by as many as 10 points, but crumbled after losing arguably their most important player, the 2020 Naismith Defensive Player of the Year DiDi Richards, to a hamstring injury late in the third quarter.

The Huskies’ close win showed their strengths — and where the young team and its freshman starters still occasionally stumble. First among those strengths is freshman Paige Bueckers, a player of the year candidate who has already exceeded the sky-high expectations she faced when arrived at Connecticut. She scored 28 points in the victory over Baylor, and has averaged 22.5 points in four tournament games.

“Paige does a lot of things that you can’t explain,” Auriemma said after the game. “There are a lot of things that Paige has to learn, that she doesn’t handle so great right now. But like all great players, she can sense the moment, and she has the ability to fill that moment.”

The biggest boost for Connecticut so far in the tournament, though, has been the top-tier play from those around Bueckers. Junior Christyn Williams and redshirt junior Evina Westbrook have given the team a boost from behind the 3-point line, and the 6-foot-4 junior Olivia Nelson-Ododa has become an unlikely distributor, with 11 assists in her past two games. Freshman forward Aaliyah Edwards successfully worked alongside Nelson-Ododa to contain Baylor’s strong post players, evidence of how much the two bigs could impact games for the Huskies going forward.

It has been five years since Connecticut’s last title, as long of a gap as the program has had between championships since it won its first in 1995. The Huskies were stopped in the Final Four three times in a row before last year’s tournament was canceled because of the pandemic, but with Bueckers, the Huskies have a generational talent to help push them back to the highest level.

Arizona’s Aari McDonald has the firepower to keep pushing it to new heights.

Between the third-seeded Wildcats’ upset win over No. 2-seeded Texas A&M and their tenacious Elite Eight victory over No. 4-seeded Indiana, Arizona is already much farther into the tournament than the program has ever been. That history comes courtesy of Aari McDonald, Arizona’s star senior guard, who scored 64 points in the past two games and has been an unstoppable force on both ends of the floor.

“When you know, you know you’re feeling it,” McDonald told reporters after the game. “I wasn’t doing too well in the regular season, taking bad shots and stuff. But now I’m really just taking what the defense is giving me.”

McDonald, the Pac-12 player of the year, is helping Coach Adia Barnes recreate some of the same tournament magic that Barnes led during her own Wildcat career, when the program reached its first Sweet Sixteen. With the win against Indiana, Barnes became only the second former W.N.B.A. player to lead a team to the Final Four — the first being Dawn Staley, who is also back in the semifinals on the opposite side of the bracket with South Carolina.

McDonald’s impact is unmatched among her teammates, although senior forward Trinity Baptiste has given the team some much-needed size and contributed a double-double against Indiana. The team plays relentless, high-energy defense that allows the Wildcats to force a lot of turnovers, especially against teams that might underestimate them.

“We just need this confidence and momentum going into UConn,” McDonald said of the team’s Final Four matchup. “UConn, we already know what they’re about: powerhouse, well-coached, skillful players. But hey, I got my chances with my teammates. Ride or die, I’m going to war with them.”

South Carolina’s young core is ready to cement its status as a powerhouse.

When the Gamecocks won their first title in 2017, they had the best player in the country in A’ja Wilson, the 2020 W.N.B.A. most valuable player. Staley looked ready to claim another trophy last season, going 32-1 thanks to a slew of young talent that didn’t yet have statues in Columbia, S.C., but were good enough that it seemed like it would only be a matter of time until they did.

Then the pandemic hit, and the Gamecocks’ momentum was at least temporarily stifled. This season, they lost four times — all to ranked teams, but still showing some of the immaturity of their young core.

“When we got knocked down four times this season, they got back up stronger, and I like that,” Staley said in a television interview after Tuesday’s win against Texas. “They haven’t even scratched the surface of how good they can be. We’re happy but we’re not done yet.”

With its 28-point victory over No. 6-seeded Texas, the program had its largest win in the N.C.A.A. tournament since that 2017 title run — and held the Longhorns to the lowest point total in the Elite Eight or later. That defense was driven by 6-foot-5 center Aliyah Boston, who had two blocks and two steals along with eight rebounds.

Boston typically fuels both the defense and the offense, scoring efficiently under the basket, but increasingly South Carolina’s quick guards have stepped into the starring role. Junior Destanni Henderson and sophomore Zia Cooke are both scoring threats anywhere on the floor, but Cooke sometimes hits shooting slumps at the wrong time and South Carolina’s offense falls out of its groove. The Gamecocks are playing their best basketball of the season now, though, and look more than ready to compete against the best teams in the country — even the ones that have already beaten them once this year.

Stanford has the grit to play from behind.

The Cardinal breezed easily through their first three tournament games, barely seeming to break a sweat as they hit 43 3-point shots. Then they met up with a scrappy No. 2 seed Louisville team in the Elite Eight that spent more than half of the game in the lead, ahead at one point in the third quarter by 14 points.

But Coach Tara VanDerveer led the team to its 14th Final Four, thanks to its typically balanced shooting. Bench players like the 6-foot-5 sophomore Ashten Prechtel, who played just 16 minutes but made all six of her shots for 16 points, a key contribution when shots from Stanford’s senior leader Kiana Williams weren’t falling.

Stanford, the top overall seed, regained its footing because it has so many players who can shoot — its strength is offense, and even in a game when it wasn’t scoring confidently, the Cardinal had still made seven 3-point shots by the final buzzer.

“I just had to change my mentality,” Williams said on ESPN after the game. “I was forcing things — I think I wanted it too bad. Once I got that first shot to go in, it started going from there.”

Facing a big tournament test against Louisville has likely better equipped the Cardinal what’s to come. Now, the challenge for Stanford will be whether its defense can stifle a team with as many skillful shooters as its own.