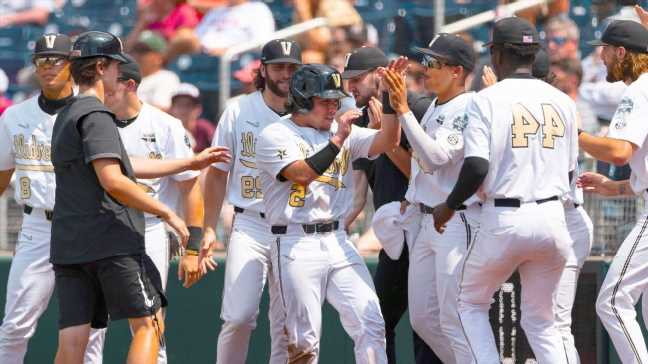 Elizabeth Merrill is a senior writer for ESPN.com and ESPN The Magazine. She previously wrote for The Kansas City Star and The Omaha World-Herald.

OMAHA, Neb. — Eleven hours after North Carolina State took the field at the College World Series with a depleted roster because of COVID-19-related issues, the Wolfpack found out their season was over.

Around 2 a.m. Saturday morning, the NCAA Division I baseball committee declared Saturday’s winner-take-all bracket final between NC State and Vanderbilt a no-contest due to COVID-19 protocols, putting the Commodores into the CWS championship round.

Vanderbilt will face the winner of Saturday night’s bracket final between Texas and Mississippi State.

The NCAA said the decision to rule NC State out was based on the recommendation of the championship medical team and the Douglas County (Nebraska) Health Department.

“The NCAA and the committee regret that NC State’s student-athletes and coaching staff will not be able to continue in the championship in which they earned the right to participate,” the statement read. “Because of privacy issues, we cannot provide further details.”

NC State has never won a College World Series championship, but hopes were high after the Wolfpack beat No. 1 overall seed Arkansas in the Super Regionals, then won three straight and spent the week in the winner’s bracket. Even Vanderbilt coach Tim Corbin said that the Wolfpack had “some magic with them.”

The magic ended Friday. Earlier in the day, ESPN’s Ryan McGee reported that Wolfpack starting second baseman JT Jarrett and bullpen ace Evan Justice were out due to COVID-19-related issues. A source described Jarrett as “no longer with the team” while Justice was still in Omaha but placed in quarantine. ESPN first learned of a positive test concerning Jarrett on Friday morning.

NC State had just 13 players Friday — nine position players and four pitchers — used 12 of those players and fell to Vanderbilt 3-1, forcing what was supposed to be an elimination game Saturday to determine who would play in the CWS championship round.

In less than 24 hours, NC State’s season was over.

Vanderbilt, the defending national champs, went into the day needing to beat NC State twice to get to Sunday’s championship round. Now the Commodores will be able to rest their two first-round pitchers, Jack Leiter and Kumar Rocker, in preparation for either the Longhorns or Bulldogs in the finals.