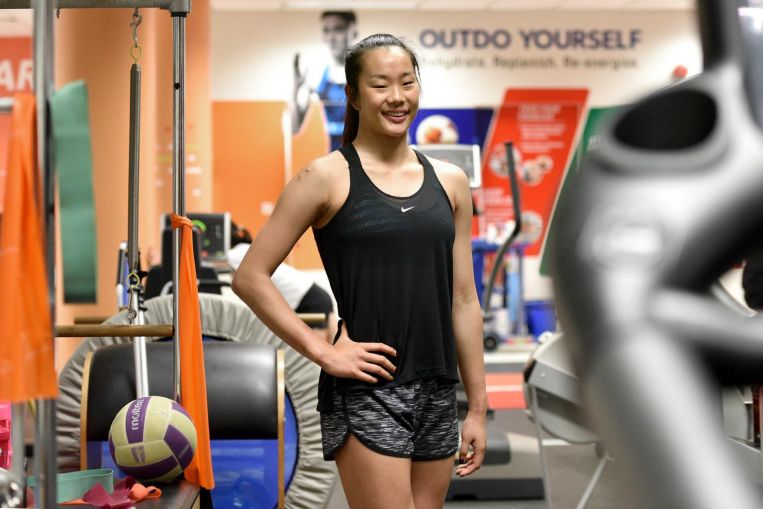 SINGAPORE – Right before the 2017 SEA Games in Kuala Lumpur, gymnast Tan Sze En fractured her left ankle, forcing her to postpone her major Games debut by a year.

She competed at the 2018 Asian Games and the 2019 World Championships in Germany – where she qualified for the 2020 Tokyo Olympics – before a lateral collateral ligament strain in her left knee forced her out of the 2019 SEA Games.

So July 25 will mark only her second major Games appearance, but the 20-year-old is keeping her cool about competing in the world’s biggest sporting event.

“I’m just really excited to soak in the experience and enjoy it when I’m there. It’s been something I’ve been working towards for a really long time so it’ll be nice to see it come to fruition,” Tan told The Straits Times in a virtual interview from California, where she is studying at Stanford University.

“I want to put out routines I’m proud of and that represent what I’ve been working for the whole time. Sometimes you get nervous and your routines get a little whacky, so I’ve been working on doing pressure sets in the gym and hopefully that translates well in competition.

“In a way, the extra year has heightened the anxiety because it seems like I had more time to get ready, but at the same time, it has also taken the pressure off, because it has been a really hard year with a lot of changes. So I’m just trying to have fun and not worry too much.”

Tan will be the second Singaporean gymnast, after Lim Heem Wei at London 2012, to compete at the Olympics. She moved to the US in 2017 and trained at Legacy Elite Gymnastics in Chicago.

She took a gap year in 2019 and enrolled in Stanford University last year. After completing her first semester virtually from Singapore, she flew to California last December where she has been living and training since.

While she admitted it was a little hard juggling school work and training at first, she has learnt to cope and manage her time, adding that she was enjoying training with her Stanford teammates.

“It’s been really great having a group of girls who push me and make training more fun. Having friends train with me makes it a lot easier and makes the mood and environment a lot better,” said Tan, who is leaning towards a major in Earth Systems.

Having experienced a host of injuries including a torn rotator cuff in 2018 and wrist injuries last year, she said they have taught her to be smarter about training.

“Most (of my injuries) are well-healed, the only one left is my wrist. It’s kind of been a long journey and I’m still not back to 100 per cent but I’m trying to work through it.

“I take fewer turns during training now so it’s about doing fewer numbers but being smarter with training and making sure everything I do counts,” said Tan, who has a “pretty light” training regimen now of about 12 hours a week.

While she said she would not be affected much by the lack of spectators, she has to deal with the disappointment of not having her family in the stands.

“My parents were there at the World Championships (in 2019) but we kind of always said the whole family would be there at Tokyo so it’s a little sad they can’t be there. It would have been a mini vacation because all of us wanted to explore Tokyo as well,” said Tan, who has two older brothers.

Her mother Teo Siew Hong was disappointed at not being able to watch her daughter in person in Tokyo but said the family will still gather to watch her from Singapore instead.

The retiree, 58, said: “We have been also going on this yo-yo ride wondering whether the Olympics are on or off. Sometimes, after a competition, we like to catch up with her for a meal… We were hoping to do that in Tokyo, which has great food.

“We are very proud of her. Sports at the elite level requires a lot of time, effort, sweat and tears. Discipline and time management are a must to balance both sports and studies. Sze En has managed both very well.

“She is very self-motivated and very disciplined. She also has strong determination, and we can see that despite many setbacks due to her injuries, she persevered.”

But having taken up gymnastics at the age of six and going through many ups and downs since, Tan has learnt to take things in her stride.

She said: “It’s taught me determination and perseverance because I’ve been injured a lot of times so it’s always a long journey to come back. It really tests your patience and you just have to trust the process and know that things will work out in the end if you put in a lot of effort.

“I just want to show what I’ve put so much effort towards and a lot of people have helped me along the way. My family and coaches have invested so much in me and I want to make sure I’m doing them justice and doing them proud.”