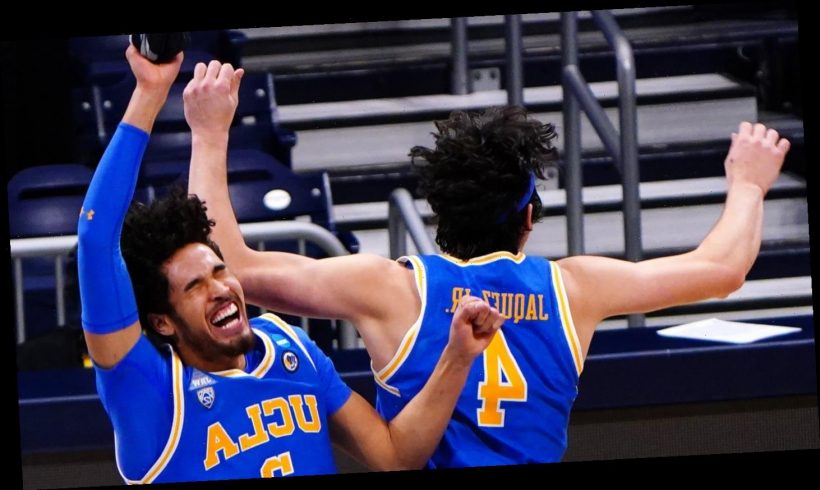 “You show up in workouts tomorrow, you’re my player,” Cronin said. “Some people take jobs and everyone is running for the hills. But everybody showed up and we got to work. I told the guys, if you’ll listen and hang in there it’s not going to be easy but you’ll be able to have pride and be able to hold up your end of the bargain at UCLA.”

The bargain, as it were, has been fulfilled and then some. The UCLA Bruins — the gutty, resilient, irrationally confident UCLA Bruins — have gone from the NCAA Tournament bubble to the Elite Eight after an 88-78 overtime win over No. 2 seed Alabama that fulfilled every promise Cronin made to his players from the day he walked on campus.

After absorbing what could have been an all-time tournament gut punch when Alabama’s Alex Reese made a tying 3-pointer with fewer than two seconds left in regulation, UCLA glared at one of the top-five defenses in college basketball like it was dessert. It rose from the ashes of tournament ignominy and scored seven straight points. As Alabama melted with missed free throws and wasted possessions, the Bruins embraced the pressure of the moment.

L.A. STORY: USC and UCLA are in the Elite Eight together for the first time ever

ANALYSIS: Alabama beats itself with horrible performance from the charity stripe

“We knew we had nothing to worry about — this is March,” UCLA guard Jaime Jaquez said. “We knew we’ve been in that position before. We knew we had to be the toughest team out there and that would be the reason we won the game. We’ve been in those positions. You don’t win every single game but it’s a position we were very comfortable with.”

They were probably the only ones.

But it’s actually true. UCLA, despite its No. 11 seed, has been built for exactly these kinds of games.

You can’t go back in this sport and wonder what if. UCLA’s season might have been different had senior Chris Smith, who was averaging 12.6 points, not torn his ACL in January. You can’t reverse some of the crazy losses UCLA had this season, like against Stanford in January when the Bruins lost on a last-second layup or when they lost to USC at the end of the regular season on a fadeaway 3-pointer or against Oregon State in the Pac-12 tournament when they blew a big lead late.

All you can do is scrape into the NCAA Tournament and hope that you can keep the season going long enough for the pain to pay off.

“My experience tells me it’s fools gold when you run up and down and you don’t get resistance and it’s easy to score,” Cronin said. “We haven’t had one of those games in a long time.”

In the most simplistic sense, UCLA has gotten its karmic payback in the last two weeks. Instead of catching bad breaks and losing all the close ones, they’re coming from 14 down in the first half to beat Michigan State in overtime in the First Four, getting an overmatched Abilene Christian in the Round of 32 and watching Alabama miss 14-of-25 free throws in the Sweet 16.

But assigning all of that to good fortune wouldn’t give the proper amount of credit to UCLA for the belief to hang in there and make this happen, even when that 3-pointer from Reese might have seemed like the end.

“You’re in this situation and that happens to you at the buzzer you have every reason to fold, every reason to fold,” Cronin said. “These guys just refused to give in, and you know how much I’ve been trying to instill that will in them. Somebody might beat you but you never let up and I give kids all the credit.”

It’s a glorious reminder of how random and ridiculous this tournament can be. Cronin coached some excellent teams during his 13 seasons at Cincinnati but reached the Sweet 16 just once. Along the way, he learned all about the heartbreak of this tournament, most notably in 2018 when the Bearcats won 31 games, got a No. 2 seed and led Nevada by 17 with 10 minutes left in the second round. Cincinnati lost that game on a basket with 10 seconds left, and when Cronin took the UCLA job a year later a large number of fans questioned why the Bruins had hired a coach with a long track record of not going deep in the NCAA Tournament.

Well, this is why. Because Cronin is a disciple of Rick Pitino and Bob Huggins, and took the job knowing exactly what kind of coach he is, what he demands from players and what a team that buys in will look like on the other side. It doesn’t guarantee a national championship, or even a long stay in this tournament, but it sure does look good when you have the intestinal fortitude to take down a No. 2 seed in overtime after they’ve nearly ripped out your heart.

“You have to demand so much, but I give the kids credit because there’s already 1,000 people in the transfer portal,” Cronin said. “It’s hard to dig in and deal with a short Irishman telling you to get in a defensive stance.”

But the Bruins have stayed with him at every turn, and now stand just 40 minutes from their first Final Four since 2008. This time, No. 1 seed Michigan is in the way, and they know it won’t be easy. Cronin wouldn’t have it any other way.