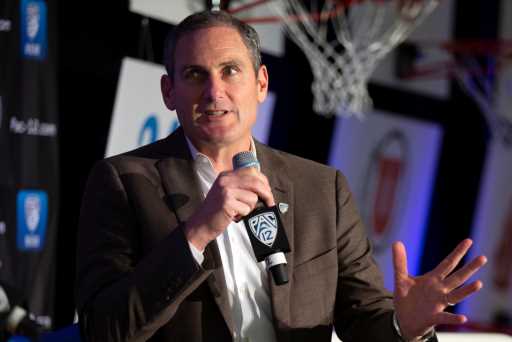 The Pac-12 announced Wednesday that commissioner Larry Scott won’t seek a new contract and has agreed to step down in June following a tumultuous 12-year term at the helm.

Scott is under contract through the summer of 2022 and will be paid for the remainder of the deal. He earns approximately $5.5 million per year (without pandemic reductions).

The decision followed what the conference described as “ongoing discussions” between the member schools’ presidents and chancellors and Scott.

The thunderous development means Scott will not lead the Pac-12’s media rights negotiations that are vital to the future of the conference and expected to begin in late 2022.

The Pac-12 will conduct a national search for his replacement.

Whether the next commissioner comes from college sports or from the sports media industry —that’s a decision for the presidents — Scott’s successor will inherit a conference struggling financially and competitively.

“We appreciate Larry’s pioneering efforts in growing the conference by adding new competitive university programs and accelerating the Pac-12 to television network parity with the other conferences,” Oregon president Michael Schill, head of the Pac-12’s CEO Group, said in the news release.

“At one point, our television agreement was the most lucrative in the nation and the debut of the Pac-12 Network helped deliver our championship brand to U.S. and global markets on traditional and digital platforms.

“That said, the intercollegiate athletics marketplace doesn’t remain static and now is a good time to bring in a new leader who will help us develop our go-forward strategy.”

The news of Scott’s departure was first reported by the Sports Business Journal.

Scott, who joined the Pac-12 in the summer of 2009 after running the Women’s Tennis Association, brokered a groundbreaking deal with ESPN and Fox and created the Pac-12 Networks.

But in recent years, a string of controversies has damaged the Pac-12 brand while it falls further behind its peer conferences in annual revenue and success on the field.

The revenue woes are due, in part, to Scott’s miscalculation with the Pac-12 Networks.

“I was in pro sports for 20 years, I’ve now been in college athletics for more than 10 years, and now is a great time in my life to pursue other exciting opportunities,” Scott said.

“This moment, when college athletics are moving in a new direction and with the Conference soon commencing the next round of media negotiations, it seems the right time to make a change.

“It is important that the conference be able to put in place the person who will negotiate and carry out that next agreement. Based on the recent robust valuation and marketplace interest we’ve received from traditional and nontraditional media organizations, I am confident the conference is well-positioned for continued success.”

Support the Hotline: Several Hotline articles will remain free each month (as will the newsletter), but for access to all content, you’ll need to subscribe. I’ve secured a rate of $1 per week for a full year or just 99 cents for the first month, with the option to cancel anytime. Click here. And thanks for your loyalty.

*** Pac-12 Hotline is not endorsed or sponsored by the Pac-12 Conference, and the views expressed herein do not necessarily reflect the views of the Conference.