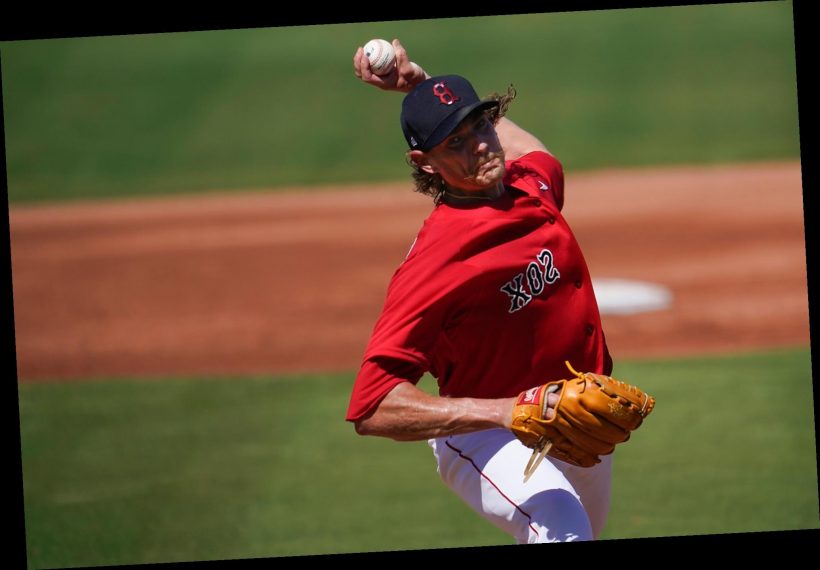 Two men shown sneaking into Fenway Park: ‘This is crazy’

Prospect shocked Mets traded him so quickly: ‘What is going on?’

Garrett Richards had gotten only one out during his first spring training start, loading the bases and walking in one run before the Red Sox stopped the inning after 23 pitches.

“It’s building blocks man,” he said after being rescued by the new rule this spring training that allows managers to end an inning after a pitcher has thrown 20 pitches, regardless of how many outs or runners on base there are.

“Obviously, you want to finish it and you want to you want to make all the outs that you’re outing requires,” he said. “So, yeah, it was a little frustrating.”

Richards told reporters from Fort Myers, Florida, that his pitches were moving well, but he just struggled to keep them in the strike zone. He allowed two runs, three hits and two walks in the first inning before it ended.

“By all means, not happy about it. Today’s today’s outing is not what you’re going to see from me on a regular basis, I’ll tell you that right now,” he said. “I just needed to stay a little bit more in competitive mode versus mechanical mode. So once that switch kind of flipped, everything kind of felt great again.”

Richards spent his first 10 seasons on the West Coast with the Los Angeles Angels and San Diego Padres, interrupted by Tommy John surgery in 2018 that cost him most of ’19, as well. He went 2-2 with a 4.03 ERA during the pandemic-shortened 2020 season and agreed to a $10 million, one-year deal with Boston in the offseason.

“What gets my attention is his stuff,” manager Alex Cora said. “He’ll be one of our guys. And he should be a good one.”

He showed it in the second inning, when he retired the Braves in order.

“It was great to get back out there and finish a strong second inning, get some quick outs,” he said. “It was nice to be able to offset that first inning and kind of get my work in, complete my my outing, but also finish on a strong note.”

Also Monday, shortstop Xander Bogaerts had the day off to recover from a sore shoulder. Cora said Bogaerts’ throwing program in Aruba “wasn’t perfect” because of coronavirus lockdowns, and Bogaerts rushed to get ready.

“We shut him down for a little bit,” Cora said. “He’ll be OK in a few days. We’ve just got to be patient. We got plenty of days, right? We’ve got what, 30 more days? So as of now, we do feel that he should be ready for opening day.”

The Red Sox committed four errors in the 5-2 loss to Atlanta.

Another injury that cropped up was to pitcher Zac Grotz, a non-roster invitee who winced in pain after throwing a pitch and left the game. Cora said he tested fine afterwards and wasn’t feeling any pain.

A few players and several members of the training staff came down with a non-coronavirus illness and needed some time off. After receiving an email saying that they were sick, Cora said he was relieved to be notified that their COVID tests were negative.

Cora also said outfielder Franchy Cordero, who was obtained in the trade that sent Andrew Benintendi to the Kansas City Royals, was on his way to Fort Myers and would need a couple of days to clear protocols.

Japanese pitcher Hirokazu Sawamura was expected to arrive on Monday and had already passed his COVID test, Cora said.

“Everything went the negative way, in a positive way,” he said.