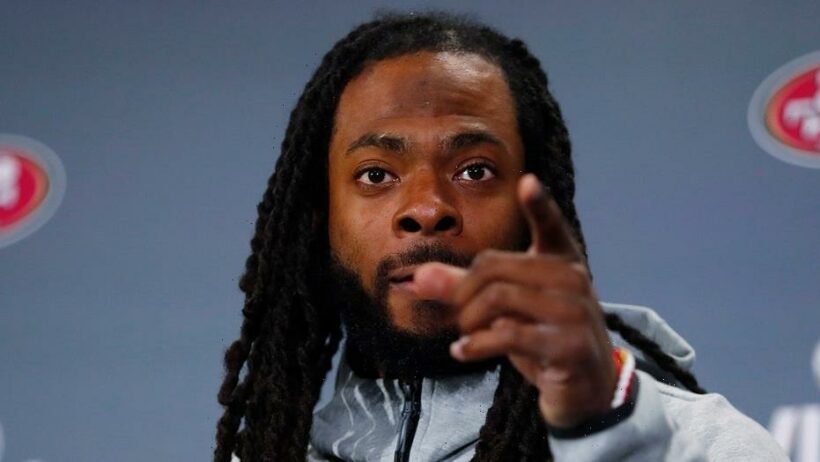 Sherman’s father-in-law, Raymond Moss, apparently had a handgun in his possession and he shot pepper spray at the former All-Pro cornerback, according to the police report.

Moss was trying to protect his family as Sherman was trying to break down the door to enter his in-laws’ home. Moss told investigators that the NFL star partially broke in the door by repeatedly hitting it with his shoulder.

Moss said that Sherman called out, “Come through, Ray!” in a threatening tone of voice.

“The family began to yell in fear,” Moss told police officers. “I used pepper spray on Sherman’s face through the partially opened door as he was still banging and attempting to gain entry. I told him to stop. I armed myself with my handgun at this time fearing for the safety of myself and my family.”

A 911 call obtained by KIRO revealed alarming details leading to Sherman’s arrest. Moss, who placed the call, could be heard telling the dispatcher that her husband was “drunk” and had threatened to commit suicide. She noted that he was being “aggressive” and had gotten “physical” with a family member.

Moss expressed her concern for Sherman’s safety, telling the dispatcher that he was not armed. She also said he had consumed two bottles of liquor.

Sherman is being investigated for two incidents that occurred in the early morning hours of July 14. State police received a report of a possibly impaired driver at around 1:26 a.m.

The driver of the vehicle, which was registered to Sherman, crashed into a construction site somewhere along Highway 520 before driving off. The damaged vehicle was found less than a mile away, abandoned.

Redmond police received another call just before 2 a.m. about a burglary in process. Redmond Police Chief Darrell Lowe said at a news conference Wednesday that police approached Sherman outside the residence and talked for around 10 minutes before informing him that he would be getting arrested, at which point he tried to leave.

Lowe said a police dog was used to help arrest him and Sherman suffered a cut on his lower leg as a result. He noted that the front door of the home was significantly damaged.

Lowe also clarified that the domestic violence burglary charge was due to Sherman’s relationship with the residence’s owners — his in-laws — and not because of “violence against any family member significant other.”

The NFLPA issued a statement Wednesday saying it was aware of the arrest.

“We were made aware of an arrest last night of one of our player leaders for an alleged domestic violence incident and have activated our domestic violence crisis protocol for the protection and support of everyone involved,” read the statement, posted on Twitter. “We will continue to monitor events closely as more facts are made available to us.”