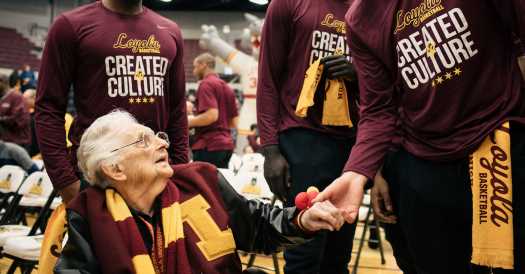 CHICAGO — For months, as Loyola University-Chicago’s men’s basketball team made an emphatic march toward its first N.C.A.A. tournament berth since 2018, the program’s most famous supporter, Sister Jean Dolores Schmidt, sat mostly sequestered in her downtown apartment, left to rely on modern technology to keep her connected with her beloved Ramblers.

Sister Jean, 101, the team chaplain who became a worldwide celebrity during Loyola’s unexpected Final Four run in 2018, watched from afar this season while taking repeated coronavirus tests — 30 in all — as the Ramblers again stated their case as one of the nation’s premier midmajor programs.

After the Ramblers secured an N.C.A.A. tournament bid by winning the Missouri Valley Conference tournament, an open question emerged for the nun who was known for writing postgame emails to each player: After a season of seclusion thanks to the coronavirus pandemic, would a vaccinated Sister Jean be allowed to watch Loyola in person as the Ramblers chased a national title?

On Tuesday, the university said it had reached a deal to allow Sister Jean to travel to Indianapolis for Loyola’s first-round game on Friday against Georgia Tech. The announcement came after she lobbied to make the trip and compared herself to the old woman in the Gospel of Luke who petitioned a judge to grant her wishes until he eventually conceded, saying, “Let her do what she wants.”

“I’m just happy that I’m going,” Sister Jean said Tuesday. “I just waited for the day that they would say yes.”

The journey to this point has been difficult and sometimes lonely, the nun who has served as the team’s chaplain since 1994 acknowledged on Tuesday. The Ramblers’ season ended last year with a loss in the Missouri Valley Conference tournament final, and there was no N.C.A.A. tournament to follow, as it became one of the first major American sporting events scuttled by the pandemic.

Before Loyola-Chicago officials confirmed Tuesday that her presence in Indianapolis had the N.C.A.A.’s blessing, Dan Gavitt, the senior vice president for basketball who oversees the day-to-day-operations of the men’s national tournament, told reporters on a conference call that officials were doing everything they could to honor Sister Jean’s wishes to watch her team in person.

“That would be fantastic for both Loyola, Sister Jean and for the tournament to have her in Indianapolis,” Gavitt said. “So we’ll do everything we can to accommodate her if she does make it here.”

As the arrangements took shape, Sister Jean was briefed on tournament safety protocols and other regulations designed to protect her during her time in Indianapolis.

She will remain at her hotel along with a nurse and security personnel provided by the university until it is time for her to make the six-mile trip to Hinkle Fieldhouse, where Loyola, a No. 8 seed, is scheduled to play ninth-seeded Georgia Tech at 4 p.m.

Before the trip was backed by Loyola, Sister Jean had private offers to transport her to Indianapolis from Chicago, including a plot by a local couple who joked that they would kidnap her in order to get her to the tournament.

For much of the regular season, fans have been heavily limited across college basketball. Some conferences loosened their rules during conference tournaments, and the N.C.A.A. announced ahead of the men’s tournament that it would allow arenas hosting the games, all in Indiana, to be 25 percent filled. Similar guidelines were announced for the women’s tournament, which is being held in Texas.

Sister Jean’s presence at Loyola games thus far this season has been limited to the cardboard cutout of her that was a fixture at the university’s Joseph J. Gentile Arena. Unlike in years past, when she huddled with players for pregame prayers as Loyola’s team hovered over her, Sister Jean’s pregame chats took place over phone calls.

Typically, about 30 minutes before tipoff, she receives a phone call from London Dokubo, Loyola’s director of basketball operations, who puts her on speaker phone to allow the players to hear a familiar voice.

“Hi, you Ramblers, are we ready?” Sister Jean begins.

She then prays for the players’ safety, that they display good sportsmanship and that the referees call the game with fairness. She gives the team her personal scouting report of that game’s opponent and then asks the players to extend their hands so she can ask God to bless the hands that will be used throughout the game for shooting and rebounding.

Sister Jean knows this year’s tournament trip will be different, and is ready to play by new rules. Unlike in 2018, when she was courtside to receive hugs from players as they left the floor, she understands she will not be able to have direct contact with the players she has missed so much over the past year.

She admitted Tuesday that after witnessing the magical run of 2018 at age 98, she didn’t expect to see Loyola return to the N.C.A.A. tournament in her lifetime. Although the environment will be drastically different, Sister Jean feels a connection with a team, saying the reunion will be like “Old Home Week” for her.

“They know that I will be there,” she said.