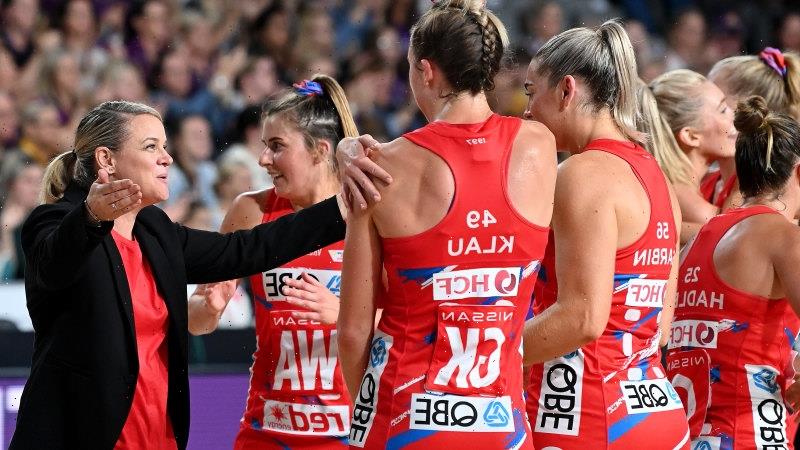 Swifts coach Briony Akle praised Super Netball for introducing extra time this season after her side claimed a historic first victory in added time on Sunday.

The Swifts won 69-66 against the Firebirds following the extra five minutes of play at Brisbane’s Nissan Arena after the hosts had dramatically drawn level in the dying minutes of regulation time. 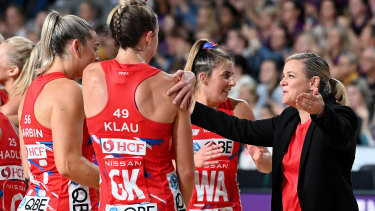 Briony Akle celebrates with the Swifts after their extra-time victory.Credit:Getty

Wallace’s leadership was vital after Swifts co-captain Maddy Proud lost her contact lens in the back of her eye and was forced off the court.

Firebirds star Gretel Bueta, who made her competitive return just four months after giving birth, also left the court with 100 per cent shot accuracy. Having missed the entire 2020 season due to her pregnancy, Bueta said she was especially nervous entering the match given her lack of experience with the controversial two-goal Super Shot.

But Bueta proved a natural, sinking a Super Shot in the last five minutes of the game to put the Firebirds ahead for the first time in the match before the Swifts got one back to push the game into extra time. 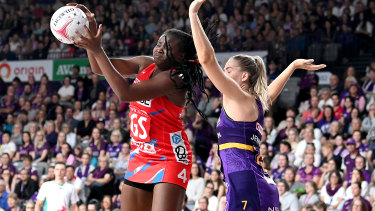 It was certainly a test for Bueta’s fitness with the pace of the game lightning-quick throughout the 60 minutes. “I’m certainly sucking in the big ones but it’s an amazing feeling being back out there and with a home crowd as well, it’s amazing,” she said.

Despite making a late comeback, the Firebirds were ultimately let down by their aggressive style attracting 95 penalities compared to the Swifts’ 46. They were egged on by their first full-capacity home crowd in over 18 months.

The spectators were so loud at one point in the second quarter that Swifts coach Briony Akle used a tactical timeout to instil some calm into her troops and to disrupt the hometown hype.

The Swifts started the match with a huge amount of pace and ended the first quarter ahead 18-13. They kept that buffer in the second term. The Firebirds remained behind with their shot accuracy despite Bueta’s effortless first Super Shot to trail 30-35 at half-time.

The visitors allowed the Firebirds back into the game with a sloppy opening to the second half. The Firebirds closed the margin to just three points by the end of the third quarter, 45-48, before Bueta closed in with a Super Shot to make the scores 64-64 after 60 minutes.

Alongside Bueta, the game marked Kim Ravaillion’s return to the Firebirds after a three-season stint with Collingwood and a year off to become a mother. Ravaillion and Bueta had made a pact when they were both 20 to have their first children at age 27.