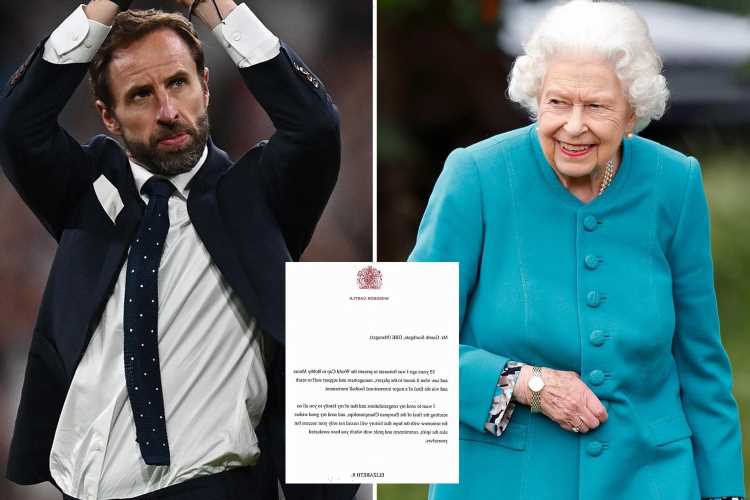 THE Queen has tonight sent a moving good luck message to Gareth Southgate and his team on the eve of their crunch Euro 2020 final showdown against Italy.

Her Majesty praised the Three Lions for their "spirit, commitment, and pride" ahead of tomorrow's nail-biting final. 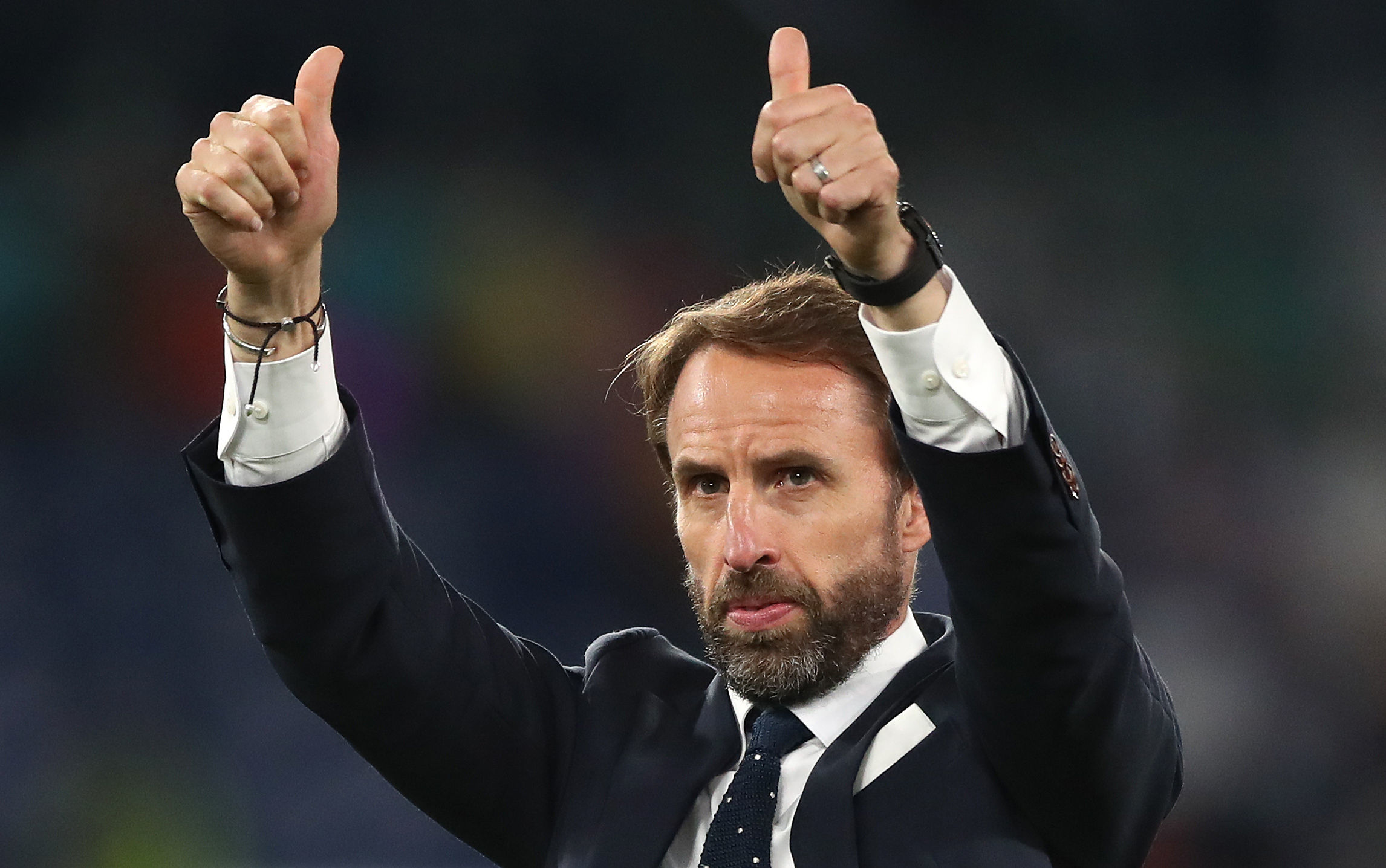 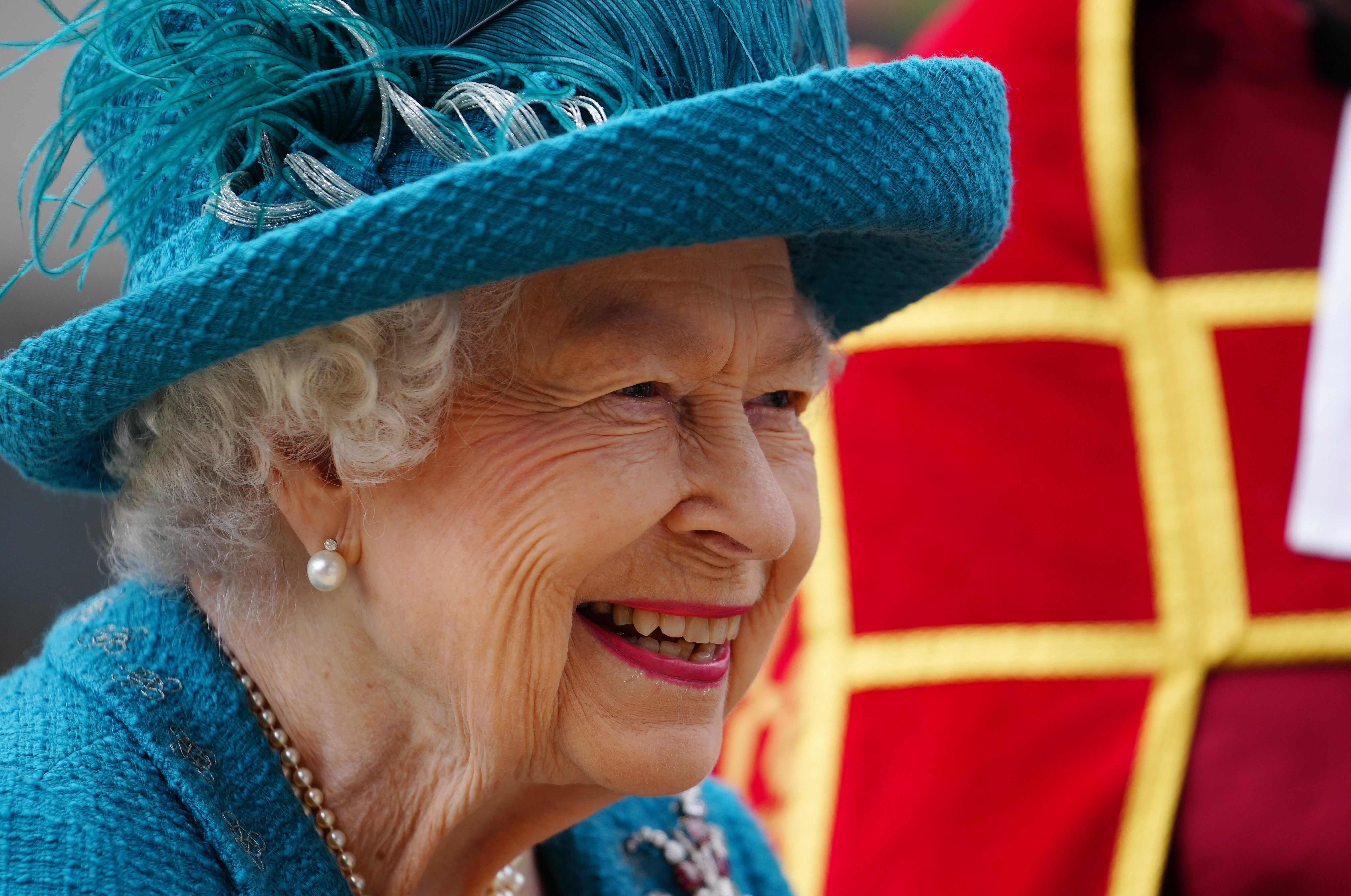 The 95-year-old has been swept up in the Euro 2020 excitement with England to face Italy tomorrow night at Wembley in the historic game.

And the monarch said she hoped history would “record” the Three Lions’ success and show them beating Roberto Mancini’s tough Italian side.

Writing the note on Windsor Castle-headed paper, the Queen evoked memories of 1966 when she famously presented the World Cup to England Captain Bobby Moore after the 4-2 win over Germany.

The Queen – addressing the letter to manager Gareth Southgate OBE– wrote: “55 years ago I was fortunate to present the World Cup to Bobby Moore and saw what it meant to the players, management and support staff to reach and win the final of a major international football tournament.

“I want to send my congratulations and that of my family to you all on reaching the final of the European Championships, and send my good wishes for tomorrow with the hope that history will record not only your success but also the spirit, commitment, and pride with which you have conducted yourselves.”

She signed the note “Elizabeth R”.

The England squad responded to the "very, very special message", saying: "Thank you for your support, Your Majesty." 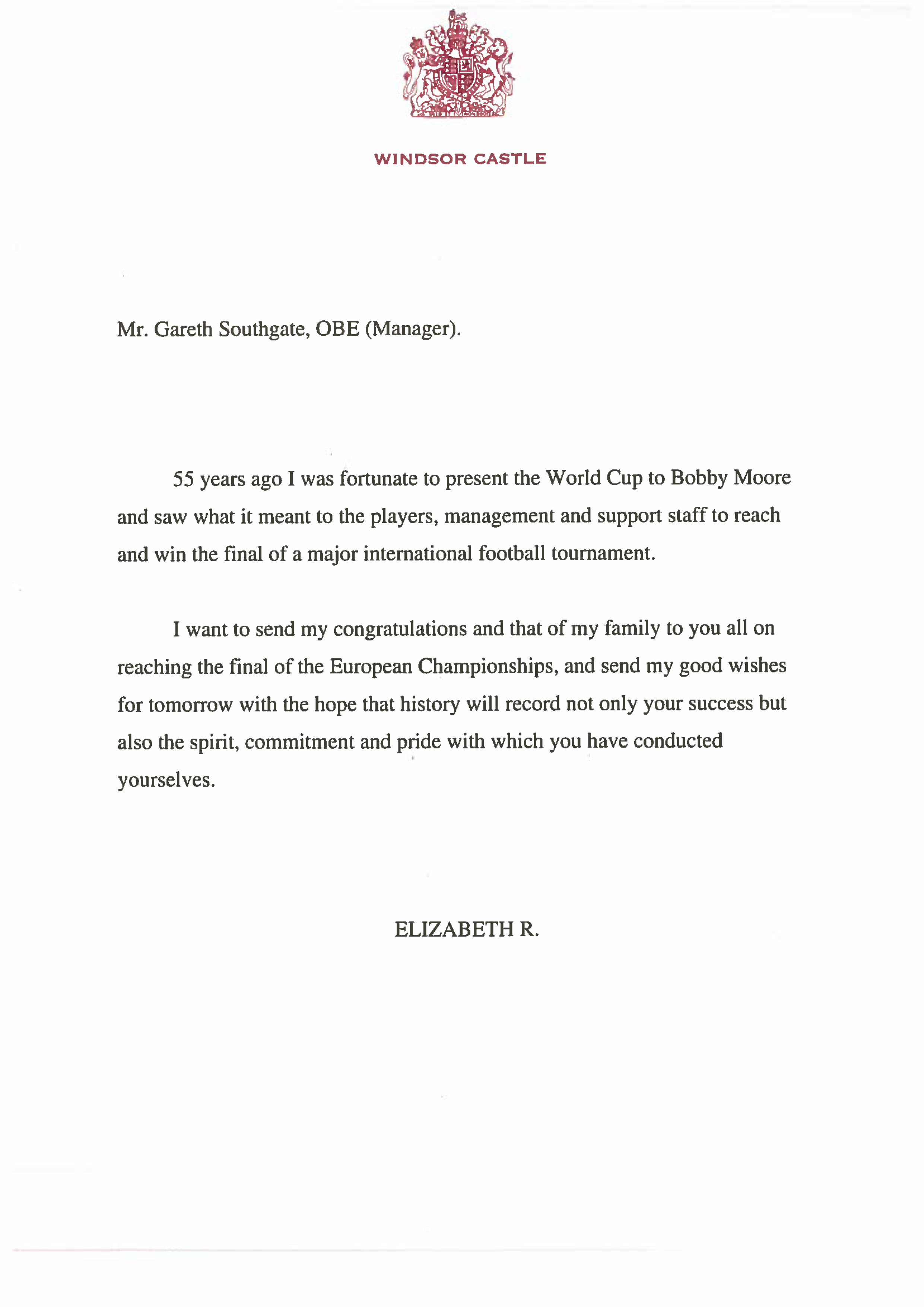 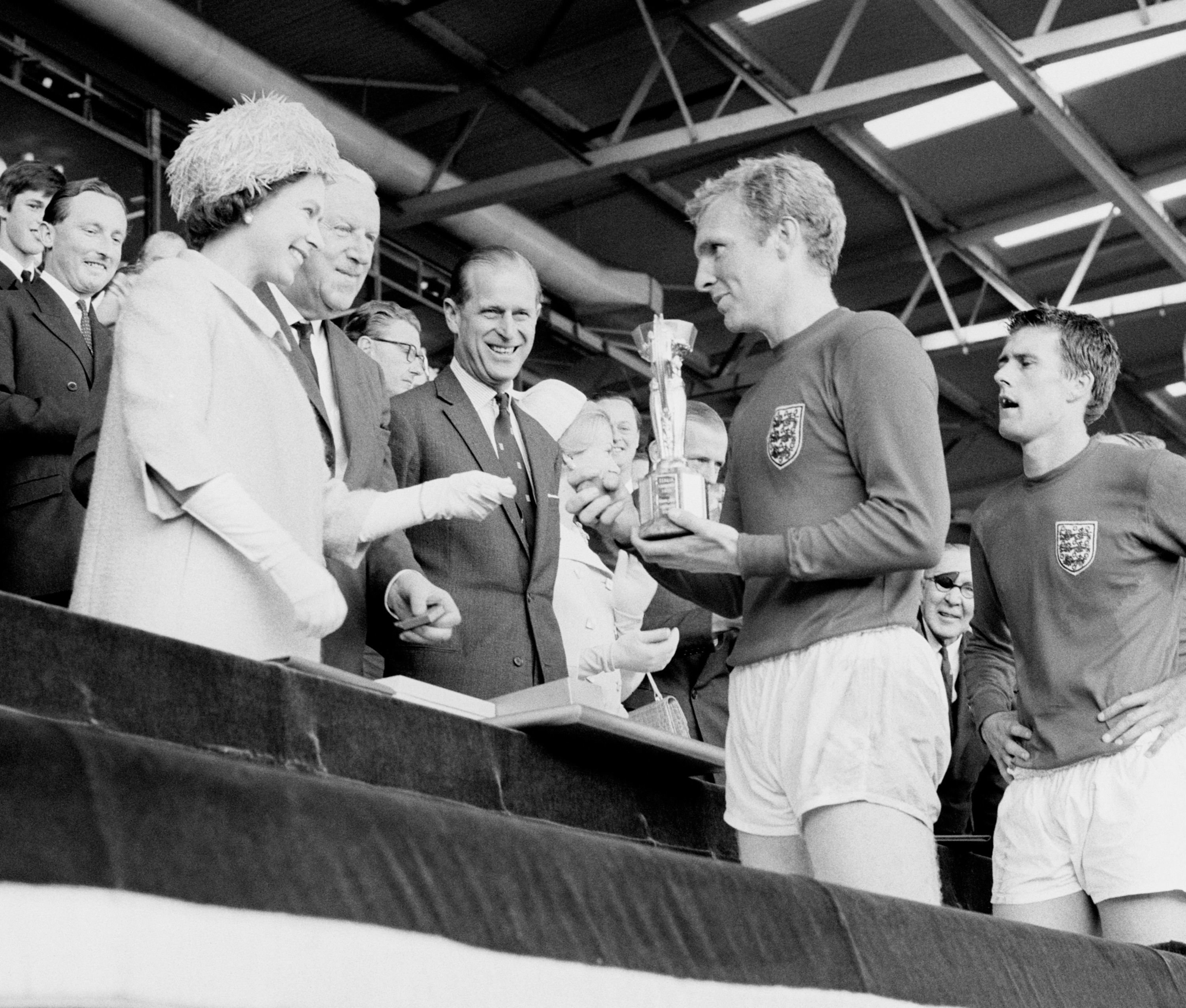 Her Majesty is not expected to be at Wembley for the 8pm kick off tomorrow night– with the Royal Family represented by footie-mad Prince William, 39, and his wife, Kate Middleton.

But the monarch is expected to watch the historic game on TV at Windsor Castle, joining a 35-million strong audience also tuning in at home.

Supporters are also set to cheer England on in pubs, homes and fan zones.

A crowd of around 65,000 will roar on the Three Lions inside Wembley Stadium tomorrow night.

And with barely 24 hours to go until kick off, excitement is reaching fever pitch.

Euros euphoria has well and truly swept the nation, with chants of "It's Coming Home" on repeat.

Although Uefa has allegedly banned Baddiel & Skinner and the Lightning Seeds from singing the footie anthem at Wembley before the game as it will be "unfair" on Italy.

But the song could finally be coming true as the squad prepares to end a 55-year trophy drought.

In 1996, Bobby Moore wiped his hands before shaking hands with The Queen and accepting the Jules Rimet from her after climbing the famous Wembley steps.

The delayed 2020 European Championship trophy will tomorrow be presented to the winning captain on the pitch by UEFA president Aleksander Ceferin.

There have been calls for Her Majesty to give the England manager a knighthood after his team's success in the tournament. 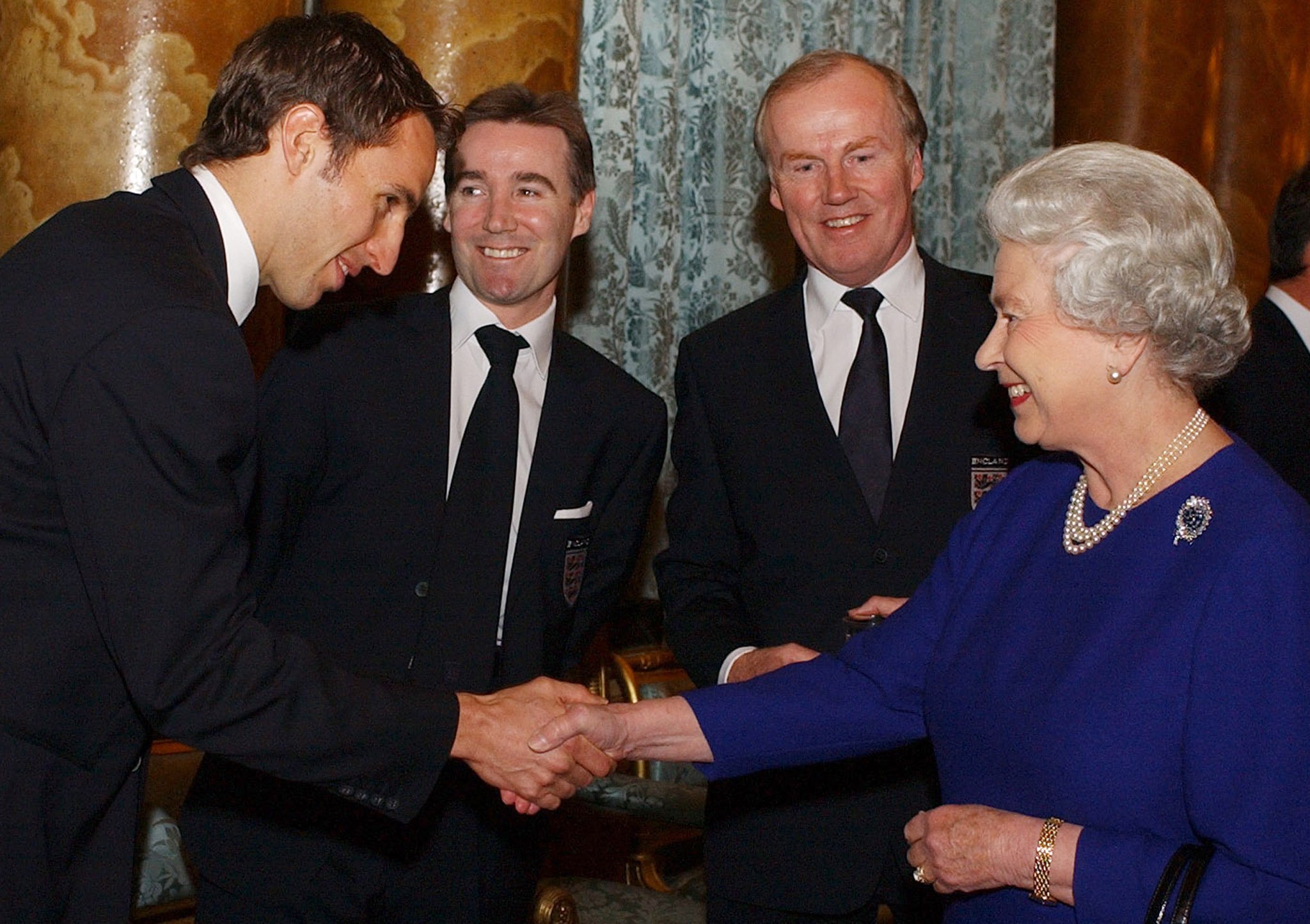 The Queen's touching message comes after Kate Kane, wife of striker Harry, posted her own emotional letter to her husband.

The mum-of-three revealed that she used to laugh at Harry when they were kids and he told her that he would be England captain one day.

Kate told him: "Bring it home for the country, you deserve to lift that trophy with this incredible England team!"

She went on to praise the striker for always believing in his dream as he prepares for England's first major league final in 55 years.

Anthony Joshua also recorded a stirring message of support for Southgate’s England squad ahead of the match.

The World Heavyweight boxing champion said: "Boys, what can I say – it's been a Sterling effort so far.

"The nation believes you Kane go all the way and I'm sure you will leave everything on the pitch."

And Tom Cruise even made a good luck call to the boys.