With anguish and hope writ large on his young face, Victorian boxer Harry Garside was begging earlier this week as he waited for the judges’ decision in the lightweight quarter-final.

Australian teammate Skye Nicolson wore the same tortured look in the minutes after her featherweight quarter-final last week, begging to stay alive in the competition.

When the split decision went to her opponent, Nicolson crumpled and bawled. It wrenched at your heart.

When the split decision went to Garside, setting up Friday’s semi-final against Cuba’s Andy Cruz, he celebrated like he’d just been crowned champion of the world. It wrenched at your heart, too.

What most people would have missed was Nicolson’s reaction from the stands at the Kokugikan Arena. 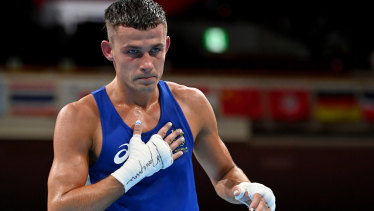 Harry Garside will on Friday fight for a place in the lightweight boxing final against two-time world champion Andy Cruz from Cuba.Credit:Getty

Instead of flying home early to contemplate what might have been, she has stayed behind to support Garside.

Gold medals are all well and good, especially when we’re wiping the floor with superpower nations as Australia did again on Thursday, but these boxers represent the magic of the Tokyo Olympics.

Every Olympics, for that matter. Every four years – five in this instance – we question their relevancy, if they’re worth the economic pain on the host city, and then come out the other side feeling a little better about ourselves, a little more inspired than we were 16 days earlier. 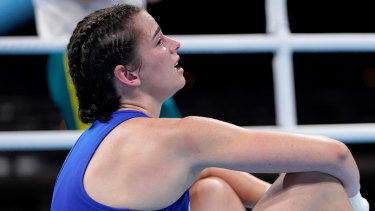 Skye Nicolson breaks down in tears after losing in the quarter-finals of the women’s featherCredit:Getty

According to those I’ve spoken to in the Olympic Village, both Garside and Nicolson are gems. Both are equally amazed and humbled that people are interested in them.

Garside told his local paper when he was 12 years old that he wanted to win an Olympic gold medal. He narrowly missed selection for Rio but now, at 24, is guaranteed bronze – Australia’s first medal in boxing in 33 years – and looking to upset a two-time world champion to fight for gold.

Whatever happens will be an added bonus.

The Olympics should never become an amped-up sports carnival, with most improved awards handed out instead of medals, but it’s hard to recall when gold, silver and bronze have finished so far behind humility and fair play.

In the final of the women’s park skateboarding, competitors embraced each other after each run.

Seven commentators Nick Boserio and Mitch Tomlinson provided important context for those of us at home, explaining how Japanese entrants Kokona Hiraki and Misugu Okamoto are their own harshest critics.

It was hard to comprehend: Hiraki, the silver medallist, is 12; Okamoto is 15.

After Okamoto fell on her final run, consigning her to fourth, the other competitors hoisted her on their shoulders. Tears turned to laughter.

That’s when my bottom lip started quivering. Yes, over teenage skateboarders. There, I said it.

These have been the Waterworks Olympics. We cried when Nicolson was denied, and then cried minutes later watching the Fijian rugby team crying after winning gold in the sevens.

“I’m not a crier!” declared Emily Seebohm, who was crying after taking bronze in the 200m backstroke.

Even the non-criers were crying as distraught Hockeyroos players collapsed on the ground after losing their quarter-final against India and started crying.

Some Olympians earn a fortune, most do not. Funding has been slashed because of the pandemic. The result means the same to each of them: everything.

You can be the 278th best rugby league player in the country and earn an average wage of $313,000 a year. Some care about the wins and losses, some care more about their pay cheque and SuperCoach points.

After three years of indifferent form, Tevita Pangai jnr has joined the Penrith Panthers for the remainder of the season, telling reporters on Tuesday he’s looking to “add some professionalism to my game”.

Compare this to 21-year-old sprinter Riley Day, who gassed herself in the heats of the 200m, then ran a PB when fourth in the semi-final. 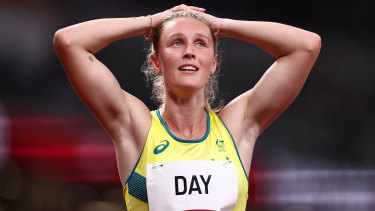 Riley Day ran a PB but missed the final in the 200 metres.Credit:Getty

“Holy shit!” she beamed despite missing the final. “I want to be the best and nothing is going to stop me from being the best.”

She then revealed she worked at Woolworth’s and didn’t have a sponsor.

Which brings us to Peter Bol.

Has this country ever celebrated fourth more than his fourth in the 800m?

I might be reading it wrong, but he seems weary of being referred to as a “kid who fled Sudan” in every interview. He’s just another Aussie Olympian having a go.

“We’re just human at the end of the day,” Bol said after the race. “We inspired the whole nation – that’s the goal.”

Maybe I’m going soft. Maybe it’s this lockdown. Maybe I’ve spent too much time on this godforsaken futon. But I’ll be choosing my inspiration with greater care from now on.

These Olympics have been the tonic we all needed – with gin, of course.

THE QUOTE
”I have no f—in’ words, man. It’s f—in’ insane.” — Australian skateboarder Keegan Palmer, who found a couple of magic words, after winning gold in the men’s park.

THUMBS UP
About half an hour before Keegs won gold, 22-year-old Australian kayakers Tom Green and Jean van der Westhuyzen were winning gold in the K2 1000m. This is officially a gold rush.

Thumbs down
The Boomers lost to Team USA. After leading by 15 in the second quarter. #sadface

It’s an even bigger day 14 at the Games for …
Australia’s Kelsey-Lee Barber, the reigning world champion who contests the javelin final on Friday night. Love her and her meat ads even though some are offended by them.