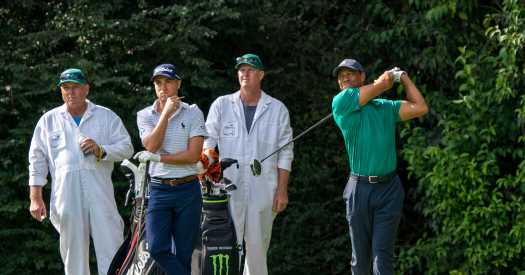 AUGUSTA, Ga. — Rory McIlroy and Justin Thomas, two of Tiger Woods’s closest friends on the PGA Tour, said Tuesday that they had recently visited Woods at his Florida home and were encouraged by how he was handling the recovery from his serious car crash in February.

“When you hear of these things and you look at the car and you see the crash, you think he’s going to be in a hospital bed for six months,” McIlroy said after practicing for the Masters tournament, which begins Thursday. “But he was actually doing better than that. I spent a couple hours with him, which was nice. It was good to see him in decent spirits.”

Woods, 45, sustained severe injuries to his right leg on Feb. 23, requiring at least two operations after the S.U.V. he was driving crashed onto a hillside along a challenging stretch of road in Los Angeles County. The Los Angeles County sheriff said last month that an investigation into the crash was finished but that the results wouldn’t be released without Woods’s permission.

McIlroy lives near Woods’s home in Jupiter Island, Fla., as do tour players like Thomas, Rickie Fowler and Brooks Koepka, who have also gone to see Woods.

“I’m sure he appreciates that,” McIlroy said. “We all have a responsibility to try to keep his spirits up and keep him going and try to get him back out here.”

“I know he’s at home and he’s fully focused on the recovery process,” McIlroy continued, “and I feel like he’s mentally strong enough to get through that. And once he does, broken bones heal, and he’s just got to take it step by step. I’m sure he’s going to put everything he has into trying to be ready to play here next year.”

Thomas has played his Masters practice rounds in recent years with Woods, a five-time winner of the tournament, and Fred Couples, another past Masters champion.

“We texted Friday morning, and he said it’s kind of starting to set in — he’s bummed he’s not here playing practice rounds with us,” Thomas said of Woods. “And we hate it, too. I’m very, very lucky that I somehow got thrown into that practice-round group with Tiger and Freddie the last four years or whatever it is. I just follow them around like puppy dogs. Wherever they go, that’s where I go. If they hit chips from somewhere, I go hit chips from there.”

Thomas described Woods’s recovery as “good” and said that each week he was home he had tried to stop by Woods’s house a couple of times. “That’s just what I want to do for him, is just be like: ‘Dude, I’ll do anything you want. If you need me to help out with your kids, I can do that. If you’re craving McDonald’s and you want me to bring it over, dude, I don’t care. I’m here for you and I’ll help out however I can.”

Thomas said he had spent substantial time watching sports on television with Woods. “We are fortunate with the basketball to just hang out,” he said, “and watch sports like we would any normal time.”