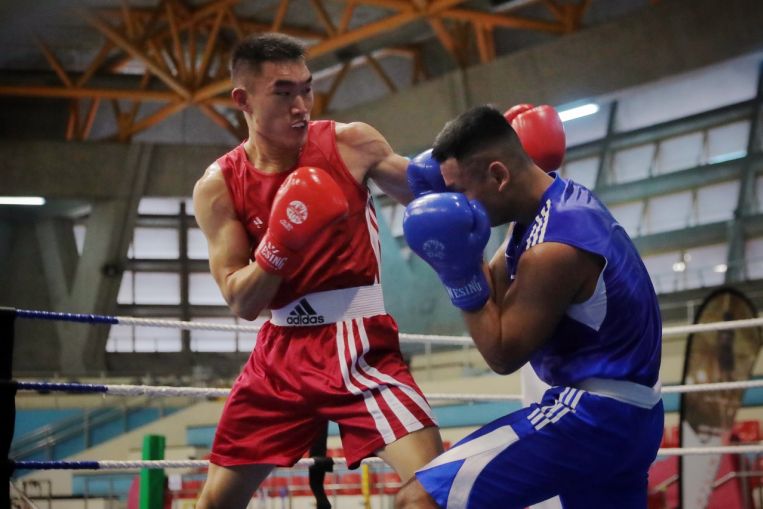 These instructions belted out in a smattering of Mandarin and English were heard from the red corner at the Bedok Sports Hall as Velco Tan battled Danish Husli for the elite 75kg title at the Singapore Amateur Boxing Association (Saba) National Championships on Sunday (April 4).

Interestingly, Velco’s cornerman in his bout, which he won by majority decision, was his Spartans Boxing club teammate and younger brother Velvan, 20. The younger boxer had beaten Mohd Khidir in the elite 69kg bout by unanimous decision just minutes earlier.

As the brothers fight for tickets to this year’s SEA Games in Vietnam, they could be joined by their elder brother Vernon, a 28-year-old personal trainer who is gunning for a spot in Hanoi to compete in muay thai. If successful, the trio will join a rare group of Singapore athletes who have competed together with their siblings at the biennial Games.

Velco, a 24-year-old full-time national serviceman (NSF) said: “Velvan is the best guy to have in my corner as he has a good eye for what goes on in a fight and gives me constructive feedback.

“There is no pressure or sibling rivalry among us as we just want the best for one another. It would be a dream to compete at the SEA Games as brothers and make our parents proud.”

The Tan brothers’ combat sports journey began in 2012, when their father decided to enrol them for classes at a gym for self-defence and to keep fit. Their mother had died of an illness in 2009 and the overweight trio were getting picked on in school.

Velvan, who is also an NSF, said: “Velco and I were more ‘hands’ fighters and we took up boxing, while Vernon preferred kicking and went with muay thai. As we started enjoying it more, we began to take part in competitions.”

While the pandemic has put a halt to travel and overseas competitions, Velvan added: ” But the good thing is we are in NS and we don’t feel that we have lost out much because most of the world of boxing is not competing much.”

Saba president Syed Abdul Kadir was encouraged to see a strong turnout of about 70 competitors over the three-day National Championships, as well as the emergence of the Tans as possible candidates for the SEA Games squad.

He said: “Velvan has more international exposure from junior levels, is intelligent and reads situations well. Velco has also stepped up recently to be more focused and consistent. NS has helped them become physically stronger too.

“We still have quite some time before the final cut is made with the Singapore National Olympic Council. While international competition is lacking at the moment, we are doing all we can to organise local events within the Covid-19 protocols.”

While the Tan siblings will do all they can to fulfil their dream of fighting at the SEA Games together, they draw the line at competing against each other.

Velco said: “We do spar with each other and push each other hard as our weight classes are similar, and did consider fighting in the same category.

“But when we talked about it, we shared the same sentiment that if we were drawn to fight each other, we would pull out as we don’t want our father to worry about us.

“We will continue to give our best in our respective weight class. The Olympics may be beyond us, but we believe we can still do Singapore proud not just at the SEA Games, but other major Games and championships.”