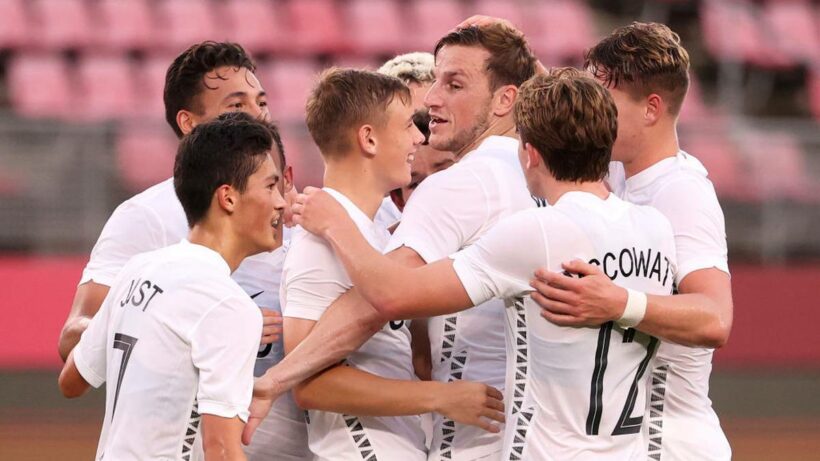 The Oly Whites have made football history in Japan, with a shock win over Korea on Thursday night.

It was a compelling performance from the New Zealand side, who soaked up plenty of pressure in the first half before stamping their mark on the match to earn a deserved 1-0 victory against the highly rated Asian side.

Chris Wood managed the decisive strike in the 76nd minute, with a clinical finish from six yards.

It’s a massive result for the Oly Whites, representing their first victory at this level, after sole draws in Beijing (2008) and London (2012).

It’s also a significant boost to their chances of reaching the knockout stages, with games against Honduras and Romania to come.

Coach Danny Hay had promised his team were in Japan to assert themselves and so it proved, with a composed all-round display. As expected, there was plenty of gritty defence – Winston Reid was outstanding, though had many willing comrades – but they showed good signs going forward, especially in the second half.

By the end the Koreans looked all out of ideas, after emptying their bench, though there some frantic moments in the final 10 minutes.

New Zealand made a cautious start, setting up with 5-4-1 formation. They sat back in a low block, wary of giving the Koreans any space or time in the final third, as Hay opted for a safety first approach against the Group B favourites, and barely saw the ball in the early stages.

But they gradually gained a foothold in the game, with Elijah Just freed just inside the penalty area, after a neat passing move. Korea – who were Olympic bronze medallists in 2012 and reached the quarter-finals in Rio – were swift and sharp but mostly well contained, with goalkeeper Michael Woud relatively untroubled in the first half, aside from a couple of tidy saves.

An encouraging sign came around the half-hour mark, as the Koreans retreated into their own half, momentarily giving up their pressing and allowing New Zealand to play. The Oly Whites had gained confidence on the ball, with neat triangles between the midfield quartet.

They had overcome early nerves, there were a couple of air swings and even Reid had a shaky start, before settling into the match.

They looked good when playing forward, after being guilty of some aimless long balls early on.

The most disappointing aspect of the first half was the inability to service Wood with a decent cross, leaving him unable to display his aerial prowess.

An important block by Nando Pijnaker snuffed out a dangerous Korean chance just after halftime, before Wood just failed to link with Joe Bell on a rare quick break.

The Oly Whites began to find space on either flank – profiting from long diagonal balls – as the game begun to open up.

Korea rolled the dice – substituting three players, including two of their over-age men – midway through the second half, which was an indirect vote of confidence in New Zealand’s work.

A Callum McCowatt corner tested the keeper, though Cacace’s follow-up shot was sliced well wide, before Pijnaker forced a reaction save from the Korean keeper.

New Zealand were growing in confidence and were then in wonderland with Wood’s strike. It reflected the confidence of the 29-year-old, who scored eight goals in Burnley’s last eleven matches of the recent Premier League season, with a brilliant first touch then crisp finish, after reacting first when the ball broke in the area.

He was initially flagged offside, before VAR adjudged it legal.

Korea pushed hard for an equaliser – and created a couple of decent chances – but New Zealand held strong to bank a famous win.