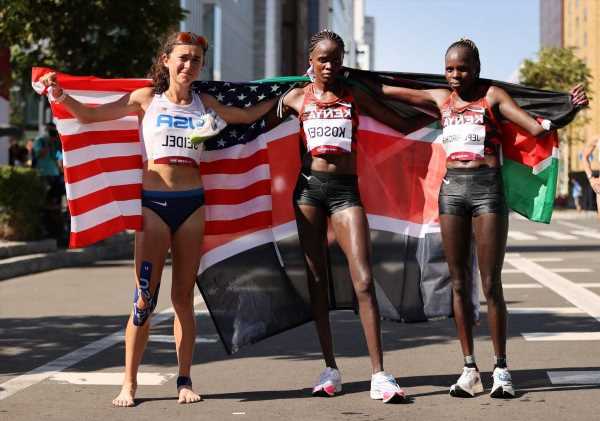 Team USA runner Molly Seidel has won a bronze Olympic medal in only her third ever marathon.

Seidel, 27, finished the gruelling event in Sapporo in 2:27:46, behind Kenyans Peres Jepchirchir and Brigid Kosgei, who took gold and silver.

Seidel became just the third ever American woman to win a marathon medal, following Joan Benoit, who won gold in the 1984 event, and Deena Kastor who won bronze in 2004.

“She’s running with experience that she, quite frankly, doesn’t have,” NBC analyst Kara Goucher said during the race broadcast.

She was once a college standout, winning four national titles at Notre Dame before her blossoming career was sidelined by a sacral stress fracture, depression and an eating disorder.

Ahead of the Olympic trials in Atlanta, Seidel had been working as a barista and babysitter in Boston but stormed to a second-place finish in the national qualifier with a time of two hours 27 minutes and 31 seconds.

Seidel has talked openly about suffering from depression and an eating disorder while at university, leading to her entering an intensive recovery programme and two years of therapy.

“With OCD, you just have this anxiety all the time and feel like you can’t control anything, so you develop patterns and behaviours,” she said previously.

”I would compulsively knock on things in specific patterns because you feel like you have some control over the universe. Over time with running, it developed into turning my eating or my running into a control mechanism.”

Seidel is originally from Wisconsin and grew up running 5km and 10km races, before finishing second at the US trials, her first ever marathon.

And in the fourth grade she wrote, “I wish I will make it into the Olympics and win a gold medal.”

After the Olympics were pushed back a year because of the pandemic she continued in training, and in October 2020 finished sixth in the London Marathon, which was held for elite runners only.