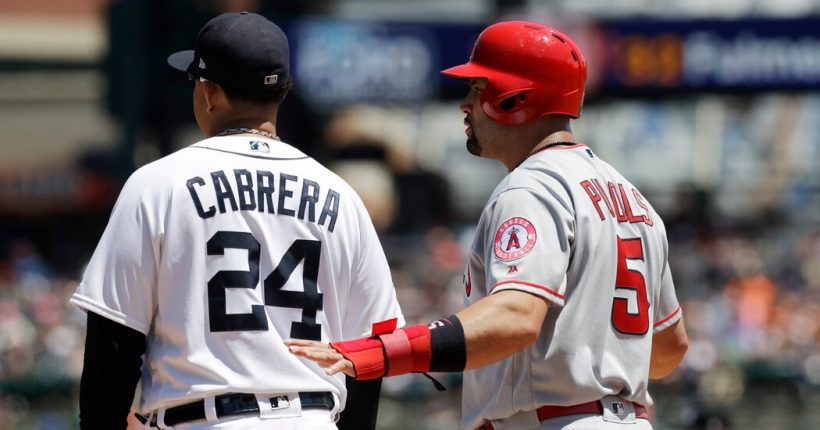 Two old baseball gods, long since surpassed by a younger generation of stars, are both aware that their days on the field are numbered. But the veterans, Albert Pujols and Miguel Cabrera, aren’t ready to leave just yet, no matter what you’ve heard. They have unfinished business.

For Pujols, there is the remote chance that he can become the fourth player to reach 700 home runs. For Cabrera, there is the far more realistic chance that he can be the seventh player — Pujols is one of the others — to reach the combination of 3,000 hits and 500 homers. With those goals in mind, and with a combined $60 million to earn this season regardless of how — or how much — they play, both players addressed their plans for 2021 over the last few days. Each brushed off any talk about being done.

Two of the most accomplished players not only this era but any era, Pujols and Cabrera will leave an enormous void when they hang up their spikes. They already rank 1-2 on the active lists for hits, home runs, doubles, runs scored, runs batted in and total bases. They have, collectively, amassed three World Series titles, five Most Valuable Player awards and 21 All-Star appearances. No one can accurately be described as a “future Hall of Famer” until they get in — see: Roger Clemens and Barry Bonds — but barring any unforeseen news developments, both Pujols and Cabrera should be elected easily on their first ballots.

First things first, though. Over the weekend, Pujols had to address an Instagram post by his wife, Deidre, that suggested 2021 would be his final season. He is entering the 10th and final year of a $240 million contract with the Los Angeles Angels, he turned 41 in January and he was relegated to part-time duty last season, so it was not all that surprising to see a post that began “Today is the first day of the last season of one of the most remarkable careers in sports!” Deidre Pujols spoke of him finishing “the last race,” mentioned the goal of reaching 700 home runs and added the hashtag #lastseason.

The tributes poured in, people began contemplating the stated home run goal, and the totality of Pujols’s career and his Cooperstown credentials began the dissection typical of such an announcement.

Then Deidre Pujols edited the post to clarify she meant the last season of his contract. Then she edited it again to say emphatically “THIS IS NOT AN OFFICIAL STATEMENT OF PUJOLS RETIREMENT.” 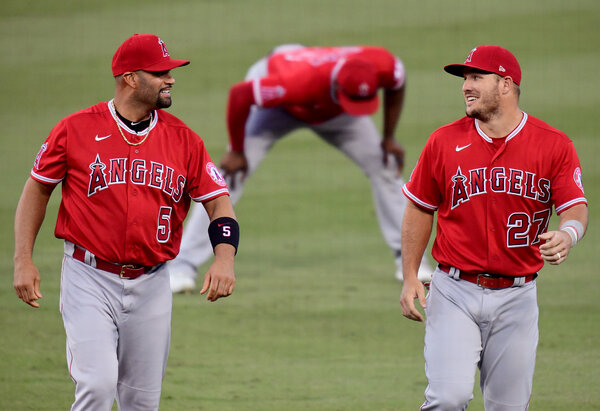 While brushing aside the conjecture, and ignoring the strong phrasing of the original post, Pujols addressed it on a video call with the news media on Saturday. He said he was sleeping when his wife’s original post went up, and that when he does announce his retirement it will not be on Instagram. He also questioned, with a bit of a laugh, the news outlets that treated the post as breaking news.

“Hey, that’s the life we’re living on social media,” Pujols said. “It’s sad that everybody just had to run with it.”

He added: “My mind is not even there. My mind is on staying focused, healthy, and hopefully trying to help this ball club win this year, and that’s it. If I feel at the end of the year that that’s it, I’ll announce it.”

Whenever Pujols and Cabrera — who will turn 38 in April — choose to retire, the drop-off in the active leaders of some categories could be enormous. They are not only far ahead of their contemporaries in many of the statistics, but some of the players closest to them are nearing their own ends as well.

Among players 30 or younger, Starlin Castro of the Washington Nationals (1,633) and Jose Altuve of the Houston Astros (1,610) are the active leaders, but either one making a run at 3,000 seems remote. Mike Trout long ago surpassed Pujols and Cabrera as the game’s best hitter, but thanks to a high number of walks and an overall change in how the game is played, the 29-year-old Trout hasn’t had even 150 hits in a season since 2016, With 1,380 career hits, Trout’s making a run at 3,000 looks — for now — a long shot.

The drop-offs in active leaders of other categories are just as extreme.

In home runs, Pujols (662) and Cabrera (487) are comfortably ahead of Edwin Encarnacion (424), Nelson Cruz (417) and Braun (352). The top player who could reasonably be described as still in his prime is Giancarlo Stanton of the Yankees, whose 312 career homers have him less than halfway to Pujols at age 31.

How much Pujols and Cabrera can add to their totals, however, is very much in question.

Pujols is expected to split time with Jared Walsh at first base and Shohei Ohtani at designated hitter for the Angels in 2021. Despite Deidre Pujols’s hopeful talk of 700 homers, Albert enters the year with 662, and having hit only six in 39 games last season. As he hasn’t hit 30 or more homers in a season since 2016, the chances of his hitting 38 as a 41-year-old part-time player are remote.

Cabrera’s decline has also been steep, largely as a result of injuries, but his goals of 134 hits and 13 home runs are not that outlandish — provided he can stay on the field. He had 139 hits and 12 homers in 2019.

“I feel mentally strong,” Cabrera said of those personal goals in a news conference on Friday. “I’m trying to go day by day and trying to play hard.”

But beyond any statistical feats, or talk about his future, Cabrera summed up why players like he and Pujols keep coming back, even as their significant skills begin to decline. The game may be mostly done with them, but they are not quite ready to say goodbye to it.

“I love playing baseball,” Cabrera said. “I love having fun in the field. I love going out there every night.”