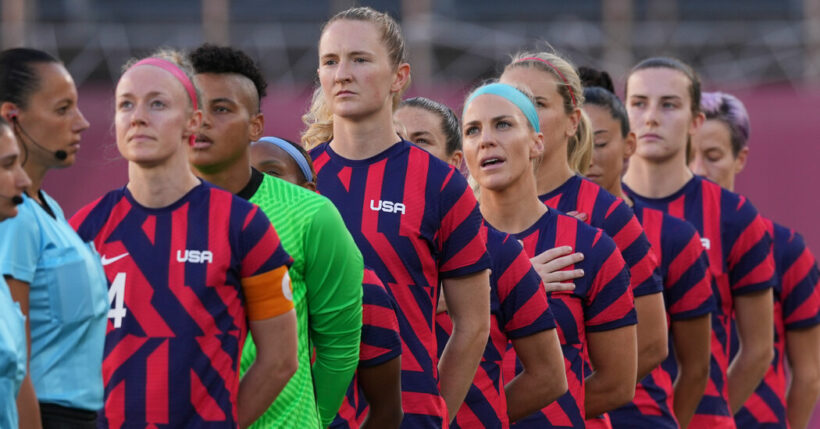 Cindy Parlow Cone has sat on both sides of the negotiating table in U.S. Soccer’s equal pay fight, first as a player for the women’s national team and most recently as the federation’s president. She knows the history. She knows the issues. And she knows the obstacles.

“We’re not on opposite sides,” Cone said Friday morning. “It may seem that way at times, but we’re on the same team, we all have the same goal. It’s just how do we get there.”

Last week, Cone took aim at what she sees as the biggest obstacle to resolving the equal pay fight: the unequal prize money FIFA, soccer’s global governing body, pays to teams that participate in the World Cup. Those payouts, worth tens of millions of dollars but vastly unequal for men and women, are widely seen as the single biggest obstacle to resolving U.S. Soccer’s long legal fight with its women’s team, which includes some of the most high profile women’s athletes in the world.

“Until FIFA equalizes it, it’s going to be those three parties that will have to come together to find a solution,” Cone said.

While separate negotiations with both teams have begun — an agreement with the men that U.S. Soccer’s chief executive said was on a “good path” in June now appears to be on hold — Cone said Friday that neither team would get a new agreement without a resolution on World Cup bonuses.

Cone also said in her letter to members that U.S. Soccer would offer the same contract to both national teams, something the federation says it has done before. The leader of the women’s team’s players association called that “simply false” on Friday.

“If the USSF was serious about equal pay, they would not engage in publicity stunts which fall short of addressing our issues,” said Becca Roux, the executive director of the USWNT Players Association. “We are interested in negotiating in good faith to get a fair deal for our players and will not let them use our fight for equality to create a divide between the women and men.”

In her letter to fans, Cone called the “massive discrepancy” in World Cup prize money “the most challenging issue we continue to face in our parallel negotiations with the men’s and women’s national teams.”

But in tying resolving it to the C.B.A. talks, Cone, who won the 1999 World Cup and two Olympic gold medals as a member of the women’s team, highlighted another longstanding feature of the equal pay dispute: The men’s and women’s team have long had different priorities in such negotiations, with the men — who earn most of their salaries from club soccer — pressing for higher match fees and bonuses and the women — who earn far less as pros — stressing the financial security of guaranteed annual incomes.

“That’s our challenge as a federation, and that’s what the women are fighting for,” Cone said. “We talk about the different structures, and that’s part of the problem — it’s hard to reach equal when they don’t want the exact same thing — but the main challenge is the massive discrepancy in World Cup prize money.

“Until FIFA solves that discrepancy, we really need the help of the men’s and the women’s teams to come together to help us resolve that. Because we can’t unilaterally resolve that.”

The U.S. women’s team’s fight has already produced significant gains for its players on pay and bonuses, to the point that the U.S. men’s and women’s teams are believed to be the two highest-compensated national teams in the world. And the women’s successes, and their public pressure, have led to tangible gains for women around the world. Ireland’s soccer federation recently joined Australia, the Netherlands, Norway, New Zealand, England and Brazil in equalizing match fees — the money players are paid by their federations for appearing in national team games — between their men’s and women’s teams.

But many of those agreements, some of them negotiated collectively by a single players association, apply only to payments from each federation to its players, and ignore the elephant in the room: that FIFA’s prize money for the biggest men’s competition dwarfs what women’s teams earn in their own world championship.

France’s men’s team, for example, claimed $38 million of a roughly $400 million prize pool after its World Cup victory in 2018, producing bonuses of about $350,000 per player. A year later, the United States women took home $4 million of a $30 million pot for winning the world title.

Like the French stars, the United States women’s players also earned six-figure payouts, but for them and other women’s players, the broader inequalities in prize money persist. Australia’s deal, for example, guarantees its men’s and women’s players the same percentage of World Cup prize money, but not equal amounts — a difference that could run into the millions over the length of the deal.

A negotiated solution to the federation’s many legal entanglements has long seemed to be the best way out of a fight that has cost U.S. Soccer tens of millions of dollars in legal fees and incalculable hits to its reputation among players, fans and sponsors. (In addition to its legal fight with the women’s team, U.S. Soccer is in a concurrent one with the former goalkeeper Hope Solo over her own equal pay claims.) It is why Cone, and the federation, have pressed for more talks in nearly every public statement on the case since she took over the role of U.S. Soccer president in March 2020.

And it may be why Cone is now focused on collective talks instead of more legal briefs.

“Obviously I would like to settle this litigation outside of the courtroom, but that takes both sides coming to the table to do that,” she said. “From U.S. Soccer’s standpoint, this litigation isn’t good for the sport, and this continuous fighting with the players isn’t helping us grow the game.”