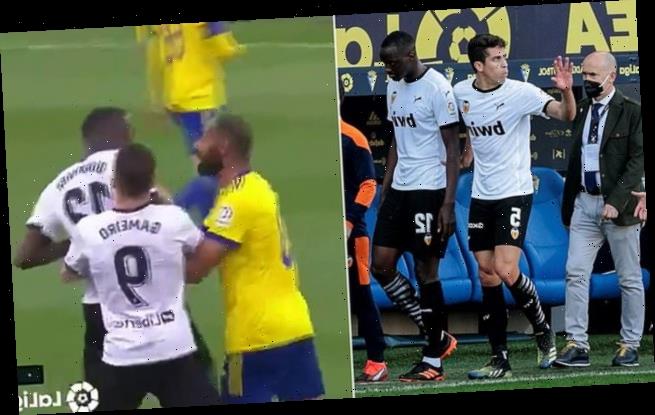 Valencia players walked off the pitch during their game with Cadiz after an alleged racist remark was aimed at defender Mouctar Diakhaby.

The incident happened 30 minutes into the game as Diakhaby had a clash with Cadiz defender Juan Cala which saw him receive a yellow card.

Diakhaby was visibly angry at something that was was then said as Cadiz defender Fali and one of his own teammates then held him back.

The referee then asked for an explanation from Diakhaby before the defender then walked off the pitch just moments later, followed by the rest of his teammates.

Sportsmail understands that Diakhaby was left devastated following the incident but Valencia have said that he asked his teammates to return to the field to complete the match.

It’s believed the team would have had to forfeit the game 3-0 if they decided to not complete the match.

The rest of the Valencia players believe Diakhaby and showed this by walking off the pitch together.

Valencia players did return onto the pitch without Diakhaby, as the club gave a statement on their official Twitter account denouncing any kind of racism.

They said: ‘The team have held a meeting and decided to continue the game, in order to fight for the honour of the club, but denounce racism of any kind.

‘We offer our complete backing to @Diakhaby_5.

‘The player, who had received a racial insult, requested that his teammates return to the pitch. WE SUPPORT YOU MOUCTAR.’

Both sets of players were given five minutes to warm up before resuming the game, while Diakhaby opted to watch on from the stands.