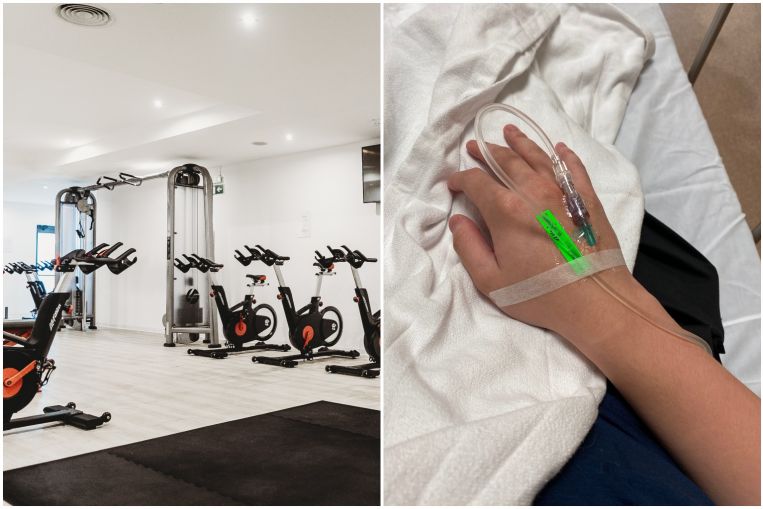 SINGAPORE – When Denise Neo signed up for her first spin class in March last year, she was excited to embark on a new workout regimen on top of her usual running and strength exercises at home, and wanted to see what spinning could offer.

Halfway through the class, she started to feel discomfort – her thigh was hurting and was losing strength, but she managed to stick it out till the end of the class.

While Neo experienced muscle ache and soreness after the workout, she brushed it off, thinking that it was the usual soreness after intense exercise. Two days later, the pain in her legs became “unbearable” and “a torture”, to the point where her entire thigh was stiff and she could not move nor bend her legs.

When she noticed that her urine had darkened, she became worried and took herself to the accident and emergency department at a nearby hospital, where the doctors diagnosed her with exertional rhabdomyolysis. She was hospitalised for close to a week.

The 29-year-old said: “I can’t even begin to describe how painful it was. It was just a different kind of soreness from the usual muscle aches. When getting into the Grab (car) to the hospital, I could barely even walk.”

Dr Benjamin Soh, a registrar at Khoo Teck Puat Hospital’s Sports and Exercise Medicine Centre, said that rhabdomyolysis occurs when the muscles are pushed beyond their limit for a prolonged period, leading to the muscle cells being depleted and ultimately dying. The dead muscle cells are then broken down and released into the bloodstream, leading to the various negative effects described.

In severe cases, the condition can lead to kidney failure and even death.

But he insisted that rhabdomyolysis related to strenuous exertion is fairly rare, with trauma, perhaps in an accident, being the most common cause.

“Although the exact statistics are not available, most hospitals likely only see a few cases in a year,” he said. “A study in military recruits undergoing basic training showed 22.2 cases per 100,000 per year – only about 0.02 per cent.”

Throughout Neo’s stay in the hospital, she was hooked up to an intravenous saline drip.

Dr Wang Ming Chang, a consultant at the National University Hospital’s division of sports medicine surgery, explained that the primary treatment for rhabdomyolysis is hydration and maintaining a high urine output to flush out muscle breakdown products from the kidney and body.

Patients are not released until the levels of an enzyme called creatine kinase – which is produced by the body when there is muscle damage – in the bloodstream are on a downward trend, and they are then followed up in an outpatient clinic until full recovery. As the affected muscles will be weaker due to a part of the muscle dying, it may take several weeks to months to train them back to their initial state. Recovery periods vary between individuals.

‘Spin on another level’

Neo is not the only person to have been diagnosed with rhabdomyolysis after a spin class.

Spinning, a high-intensity cardiovascular workout on a stationary bicycle, has gained a large following over the years. It is a one-of-a-kind workout experience, where individuals spend 45 minutes pedalling furiously in a dimly lit room along to loud, pumping music ranging from electronic dance music to the latest chart hits – somewhat like clubbing.

In a study published in the American Journal of Medicine in 2017, doctors noted at least 46 reported cases of rhabdomyolysis after a spin class – with 42 of them occurring after a first-ever session.

Aloysius Lee also suffered rhabdomyolysis after a spin class. He admitted that he might have pushed himself beyond his physical limits.

He said: “Spin is on another level when it comes to using our thigh muscles. There is no other workout that will be as intense as the amount of energy you use on your thigh muscles for spin class.”

An administrative assistant, who wanted to be known only as Ms A.L., also pointed out that the spinning shoes, which come with cleats, and the fast-paced music may also play a part in participants getting carried away.

She said: “As our shoes are clipped onto the pedal, the pedal will keep on going because of the speed, so it is hard to know when you have overexerted until you get off the bike.”

Listen to your body

While physically untrained individuals may be more susceptible to rhabdomyolysis, Dr Wang said that it could also happen to anybody, even elite athletes. Some risk factors he listed include overexertion in hot and humid conditions, as well as exercising while dehydrated, fatigued or ill. Those taking certain medications such as statins for high cholesterol or antidepressants, specifically selective serotonin reuptake inhibitors, are also at risk.

He advised beginners in group exercise classes to listen to their body and not be obliged to follow the crowd. Individuals should also start low and go slow in terms of increasing exercise intensity, as well as stay well hydrated during physical activity, especially in hot and humid conditions.

Dr Soh cautioned: “Being good at one type of exercise does not necessarily mean you will automatically be good at all types. Always take several sessions to familiarise yourself and build tolerance to the specific exercises you will be doing.”

Spin studios and instructors took pains to stress that the safety of their riders remains of utmost importance.

Theresa Shan, general manager of Absolute You Singapore, a boutique fitness studio that offers pilates and spin classes, said that the studio is one of the few in Singapore that makes beginner classes mandatory for people on trial packages, or are trying out spin for the first time. She pointed out that these classes are important as they are “held at a slower pace, orientate new users on how to use the bike, as well as take them through expectations of the class”.

She said: “Being in a class environment helps to push individuals to ensure that they get the best of the workout, but individuals need to take into account their physical abilities and not push themselves too far. As those who come ride with us are all adults, they should be able to make responsible choices on their own.”

Shan also pointed out that instructors in the studio do often remind their students to hydrate and fuel themselves adequately.

Actress and TV host Charmian Tan, who is also an instructor at Absolute Cycle, took to her Instagram page to address the matter after news broke that two women had suffered rhabdomyolysis after attending a spin class earlier this year.

She wrote: “No instructor should ever have the final say over your workout. The right instructor will always encourage you to listen to your body and show you what… can be done, not dictate your body limits.

“If something does not feel right, please don’t ever feel like you have to ‘suck it up’ because everyone else seems to be nailing a routine… Working out should always be enjoyable and feel achievable. If it is all pain, it (is not) worth it.”

Natalie Tan, spin instructor at studio Sync Cycle, echoed the same sentiments. She said: “There is no pressure and no judgment in the room. Enjoy the class, if you are tired, go ahead and rest. Just join us back on the bike whenever you are ready.”