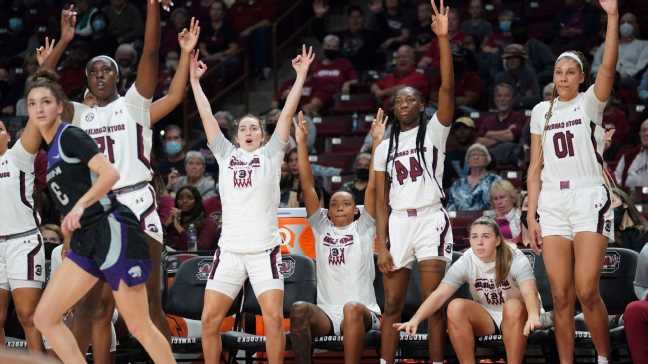 Entering the sixth week of the women’s college basketball season, 10 teams are still unbeaten, led by No. 1 South Carolina. But how many are truly Final Four contenders?

There is no question about South Carolina, which beat No. 8 Maryland 66-59 on Sunday for the Gamecocks’ fourth win over a top-10 team. Juniors Aliyah Boston and Zia Cooke both hit the 1,000-point career milestone in the game. The Gamecocks outrebounded the Terps 61-34 — led by Boston’s 16 — and coach Dawn Staley thinks this might be the best rebounding team she has had.

“We do a really great job at it,” Staley said. “It’s our bigs, and our big guards; they’re really holding it down for us.”

South Carolina, a Final Four team last season, puts its 10-0 mark on the line against 8-0 Duke, ranked No. 19, in Durham, North Carolina, on Wednesday (7 p.m. ET, ACC Network). So we know at least one of the unbeatens will fall this week.

But which of the unbeaten teams besides South Carolina might make a run at the Final Four?

The Wildcats fell in the national championship game last season, and despite losing WNBA lottery pick Aari McDonald, they are 9-0 and off to a strong start. Their marquee win came against Louisville in overtime on Nov. 12, and they face another big test on Sunday against Texas (5:30 p.m. ET, ESPN).

Tennessee (9-0), which hasn’t been to a Final Four since its last NCAA title in 2008, has victories over ranked teams South Florida and Texas but faces its biggest challenge on Saturday at home against defending national champion Stanford (5:15 p.m. ET, ESPN2).

Not there yet: Duke, North Carolina

Two programs that used to be the ACC’s biggest powers likely aren’t yet exhibiting Final Four potential, but Duke and North Carolina (9-0) are working toward it. First, they’ll try to regain ground in their own conference.

From 1994 to 2014, either North Carolina or Duke — or both — were in the ACC tournament final all but one season. Over the past seven tournaments, though, the schools have had only one ACC final appearance between them: Duke’s championship game loss to Notre Dame in 2017.

The Blue Devils’ biggest win so far this season was over then-No. 9 Iowa on Dec. 2. The Tar Heels don’t have a victory over a ranked team and likely won’t have a chance for that until they face No. 2 NC State on Jan. 6. Only three of North Carolina’s opponents thus far currently have winning records.

A tournament berth would mean a lot: Nebraska, Colorado

Colorado (9-0) hasn’t been tested yet; its strength of schedule is ranked 244th. The program got as far as the Elite Eight under Ceal Barry, but the Buffs have made the NCAA tournament just once (2013) since she left coaching in 2005.

Now in her sixth season in Boulder, coach JR Payne hopes to get the Buffs back in the Big Dance. Last season, they made the WNIT and had a regular-season victory over Stanford, one of just two teams to beat the Cardinal.

The measurement is different for these teams: How will they do in their leagues?

Tulsa was picked to finish ninth in the American Athletic Conference, but the Golden Hurricane are off to a school-record 8-0 start. Tulsa has made two NCAA tournament appearances, the most recent in 2013.

Cleveland State also has made the Big Dance twice, the last time in 2010. The Vikings were picked sixth in the Horizon League preseason poll. Cleveland State has won six games and has two more victories via forfeit.

Coastal Carolina was picked 11th in the Sun Belt, but at 8-0, it has its best start in program history. The Chanticleers have never been to the NCAA tournament, but they might have made it in 2020 had the COVID-19 pandemic not canceled the postseason.

Team of the Week: Florida Gators

The Gators beat Florida State 69-55 on Sunday in their first win in the Sunshine State rivalry since 2015, snapping a five-game losing streak to the Seminoles. Florida also beat Dayton 60-57 on Wednesday. And the Gators’ 63-54 win at TCU on Dec. 5 took on more weight with the Frogs’ win over Texas A&M. It was a challenging offseason for Florida with the resignation of coach Cam Newbauer, but at 9-3, the Gators are already three wins off last season’s victory total under interim coach Kelly Rae Finley.

The Yellow Jackets became the first unranked team to beat the Huskies since 2012, and UConn scored its fewest points since 2006. Sure, UConn is dealing with key injuries, but 8-2 Georgia Tech gets credit for its stifling defense, holding the Huskies to five points in the fourth quarter. After that marquee win Thursday, Georgia Tech had no letdown in defeating Furman 63-36 on Sunday.

After a 69-60 loss Dec. 2 at LSU — the Cyclones’ first defeat of the season and their lowest point total so far — Fennelly got his team to regroup and win its next three games, including over rival Iowa 77-70 on Wednesday before 11,348 fans at Hilton Coliseum in Ames. No. 15 Iowa State was pushed to the end Sunday in another state rivalry game but held on to beat Northern Iowa 70-69. The 10-1 Cyclones have just one game the rest of this month, vs. Prairie View A&M on Dec. 19, before starting the Big 12 season Jan. 2 against West Virginia.

The offense wasn’t what coach Dawn Staley wanted in Sunday’s victory over Maryland, but the defense continues to be superb. The Gamecocks blocked 15 shots and held the Terps to a season-low 59 points.

The Wolfpack cruised in victories over Pittsburgh and Saint Mary’s. Their contest with Georgia will be NC State’s third against an SEC opponent this season; the Wolfpack fell to South Carolina and beat Florida.

The Cardinals’ 64-58 victory over Kentucky on Sunday was a defensive clinic in how to stop a star player: Louisville held the Wildcats’ Rhyne Howard to 9 points on 3-of-13 shooting. Louisville will look forward to trying to make things as difficult for UConn in their upcoming matchup.

Tamari Key and Jordan Horston both had double-doubles in an 84-60 victory over Georgia State on Saturday, and the Lady Vols continue to be very good on the glass. They are in the top five in Division I in rebounding margin (17.3).

The Bears routed Alcorn State 94-40 on Wednesday, and NaLyssa Smith got her ninth double-double of the season. The upcoming matchup with the Wolverines will be Baylor’s second game against a ranked team this season.

Like Baylor, Arizona has played just one ranked foe so far. The matchup with the Longhorns will be the Wildcats’ last nonconference game before starting the Pac-12 schedule.

Sophomore Cameron Brink was unstoppable (25 points, 11 rebounds, 4 blocked shots) in a 91-62 victory over Pacific on Sunday. Her matchup inside with Tennessee’s Tamari Key is one to watch in the Cardinal’s upcoming annual meeting with the Lady Vols.

The Huskies hit a low point with their 57-44 loss at Georgia Tech in the first game after Paige Bueckers’ knee injury. But seemingly on the brink of losing two in a row for the first time since 1993, UConn turned things around to beat UCLA 71-61. If UConn plays like it did in the second half vs. the Bruins, the showdown with Louisville will be a good one.

It’s still early, but the Longhorns’ offense (83.8 PPG) to this point looks more effective than last season (68.9 PPG). We’ll see how that holds up against Arizona and then in Big 12 play, which starts in January.

The Terps beat Purdue 86-71 and gave South Carolina a run for its money, losing by seven despite being outrebounded by 27. All three of Maryland’s losses are to top-10 teams. Sophomore Angel Reese is averaging a double-double (18.6 PPG, 10.2 RPG).

It was a statement week for the Hoosiers — who beat Penn State, Fairfield and Ohio State by an average of 27.7 points — and junior forward Mackenzie Holmes, who averaged 23 points and 6.0 rebounds in those victories.

The Wolverines got a combined 46 points from Naz Hillmon in victories over Big Ten foes Wisconsin and Minnesota. After a poor showing against Louisville on Dec. 2, Michigan has another chance at a big nonconference win when it hosts Baylor on Sunday.

After slipping out of the Power Rankings last week, Iowa State is back following victories over in-state opponents Iowa and Northern Iowa. Sophomore Lexi Donarski had one of her better games of the season vs. the Panthers, with 19 points and eight rebounds.

The Blue Devils didn’t play this past week, so they have had plenty of time to prepare for South Carolina. We’ll see how Duke fares against a defense that is allowing just 50.6 PPG.

The Yellow Jackets’ have responded big-time since their Dec. 1 loss at Purdue, beating Georgia, UConn and Furman. Their win over the Huskies was their first against a top-five opponent since 2009. Lorela Cubaj has been a rebounding machine, averaging 12.5 per game.

Freshman guard Olivia Miles’ triple-double led the way in a victory over Valparaiso, and she was one of six players to score in double figures as the Irish beat Purdue Fort Wayne.

In the waiting room

LSU Tigers (7-1): The Tigers trounced Texas Southern 96-55 on Sunday, and that should be the case for their next two opponents — Alcorn State and New Orleans — as well.

Oklahoma Sooners (9-1): After their 99-91 overtime victory over No. 16 BYU, the Sooners might vault into The Associated Press rankings this week.

BYU Cougars (8-1): The Cougars’ loss to the Sooners was their first of the season, and they got quite a shooting performance from Tegan Graham, who hit 10 3-pointers. They were No. 12 in the Power Rankings last week.