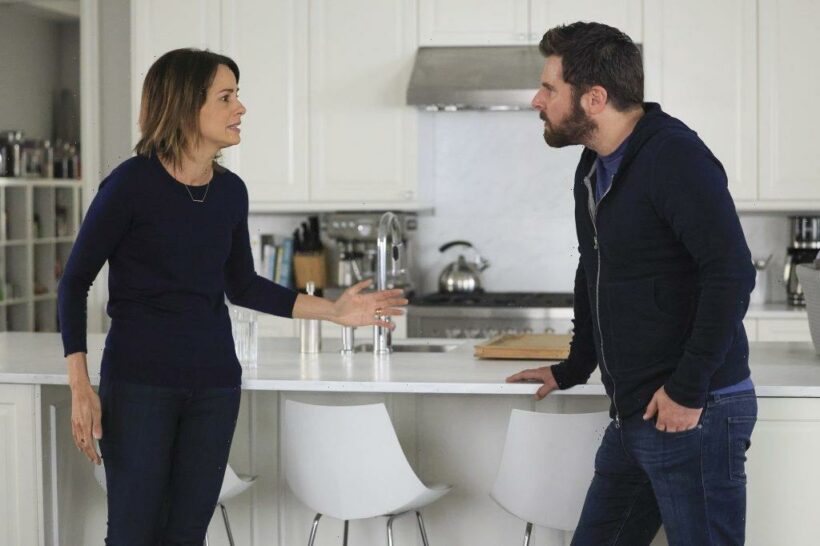 In the A Million Little Things Season 3 Episode 18 recap, Eddie Saville (David Giuntoli) goes to drastic measures to fight for his son, Theo (Tristan Byon). Delilah Dixon (Stephanie Szostak) and Gary Mendez (James Roday Rodriguez) get into an epic fight. Meanwhile, Regina Howard (Christina Moses) sells her restaurant, while Rome Howard (Romany Malco) helps Tyrell (Adam Swain) figure out why his mother was deported. Plus, viewers contemplate what Gary did to Peter Benoit (Andrew Leeds) at the end of the A Million Little Things Season 3 finale.

Eddie stopped by to drop off bandages for Theo’s burn. Eddie insisted that Delilah let him watch her kids, so Katherine (Grace Park) should do the same. However, Katherine pointed out that Delilah did not go through what Katherine did with Eddie. So, he told Katherine he would use the photos of Theo’s burns against her in court.

However, by the end of A Million Little Things Season 3 Episode 18, the couple compromised. Eddie offered to take weekly drug tests if he could have joint custody of Theo and unsupervised visits.

In A Million Little Things Season 3 Episode 18, Regina and Rome committed to selling the restaurant. Katherine helped her sell the building before she lost everything. After Katherine left, a former restaurant patron, Dustin, stopped in for some food. He told Regina about how his wife recently died from COVID-19 (coronavirus).

Meanwhile, Tyrell (Adam Swain) confronted Kyle, his mom’s former EMT partner. Kyle claimed that he didn’t report his mom. Instead, she borrowed Kyle’s car to deliver Tyrell’s summer program application to FedEx. On the way there, the police picked her up, and that’s how she got deported. Tyrell realized that he’s the reason his mother was deported. Rome and Tyrell had a serious conversation about how “everything happens for a reason.” Tyrell didn’t believe it at first, but later, he told Regina that he wouldn’t have met the Howards without the restaurant.

The episode opened with Delilah telling Eddie that she wanted to move her family to France. However, Danny overheard and stormed out of the house with his friend, Milo.

When Sophie returned to the Gregory family, Georgia (Kari Matchett) apologized. However, Sophie told them that they couldn’t press charges against Peter. Christopher (Michael Weston) got very upset, but Georgie thanked Sophie for helping them figure out why Layla died by suicide. Sophie told Georgie that her father, Jon Dixon (Ron Livingston), died by suicide, too, and the women hugged it out.

Gary tried to make Sophie feel better by telling her he should have protected her more. Danny stormed in to confront his mother about the possible move. He said to her that he finally is out at school, has a boy he likes, and doesn’t want to leave. Sophie also protested her mother’s idea about moving to France.

Delilah admitted that she hadn’t had a chance to grieve Jon’s death in A Million Little Things Season 3 Episode 18. Gary screamed back at Delilah that he had to deal with Danny struggling about whether to come out and Sophie getting sexually assaulted.

Meanwhile, Darcy (Floriana Lima) and Garcy talked about moving in together. However, when Gary brought up having a baby together, Darcy admitted that she doesn’t want any more children. Viewers could tell that Gary wasn’t happy about her decision. Later, Darcy couldn’t find Gary, so she left him a heartfelt voicemail.

Gary visited his dad for an alibi

Later, Gary went to see his dad to thank him for never leaving him. Gary apologized for changing his name near the end of A Million Little Things Season 3 Episode 18. Gary cried and told his father that he didn’t want him to think that he was rejecting his dad by changing his name.

“In this country, it’s easier to be a Gary than a Javier,” his father responded.

Then Gary told his dad that he needed him to be his alibi if anyone asked. The two men corroborated their stories, and then Javier told his son that he was proud of him.

What does Gary do on ‘A Million Little Things’?

At the conclusion of A Million Little Things Season 3 Episode 18, while Delilah cried on the couch, Danny comforted her. Meanwhile, Sophie told her story on Maggie’s podcast.

“I know you tried to take something away from me, but you didn’t,” Sophie told listeners. “I think everyone should know your name. It’s Peter Benoit.”

At the same time, Gary went to Peter’s house and threw a burlap bag over his head. While the drama suggested that Gary was about to kill Peter, many viewers think that he’s only going to try to scare the man. Hopefully, he doesn’t do anything rash that lands him in prison.

Deadline reported that the series returns for season 4 in the fall of 2021.